How the Conservatives won the red wall 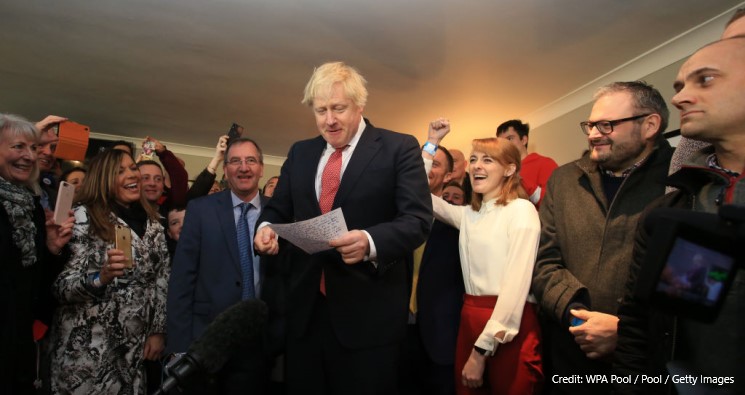 Since 13 December there has been an ongoing debate about the types of voters that Labour ‘lost’ to produce its worst defeat since 1935. Some have suggested that the so-called ‘red wall’ crumbled as a result of lost social conservatives turned off by the perceived ‘metro-liberal’ politics of the Labour party.

While polling data has shown that there were weaknesses in both the Brexit position of Labour and their leadership in the minds of parts of the electorate, it is only with academic survey data that we are able to fully delve into the differences in values that underpin the dramatic results seen in December.

The newly released British Election Study Internet Panel, waves 17-19, comprises data collected at the start of the election campaign, daily throughout the campaign and post-election.

This analysis combines reported voting behaviour after the election with value positions measured at the start of the campaign. Details of the attitudinal items used to measure values can be found here.

These are scaled to create two value ‘dimensions’ an economic ‘left-right’ and a social-cultural dimension here labelled as ‘liberal-authoritarian’.

In each case the scales run from 0 to 10 with low values being the ‘left’ and ‘liberal’ positions respectively.

Using these two scales, we can plot the positions of each parties’ voters on 12 December 2019 in a value space defined by the two value dimensions. 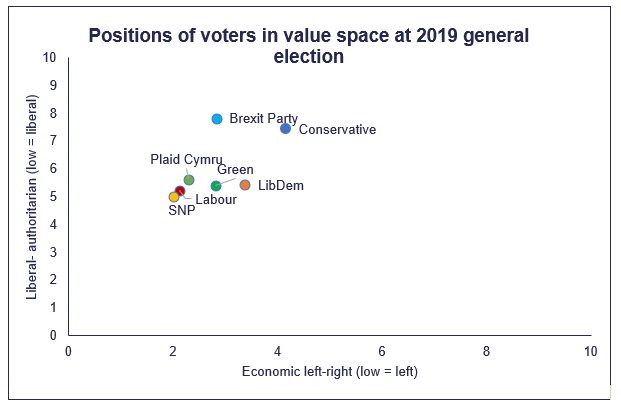 Within this value space there are clear differences between parties.

Those who voted for the Scottish National Party (SNP) or Labour are the most left-wing and liberal groups.

A clear divide emerges between the Brexit Party and the Conservatives on one hand and the other parties along the liberal-authoritarian scale.

However, the left-right dimension also distinguishes the parties.

Voters for the Conservatives and the Labour Party are almost as far apart on the economic left-right divide as they are on the social liberal-authoritarian divide.

There is a polarisation of political positions occurring between the voters for these two parties along both dimensions.

The other parties are aligned differently with each of the ‘main’ parties.

Voters for the Brexit Party are close to Labour voters in terms of their economic values but adjacent to Conservative voter positions on social issues.

While Liberal Democrat voters are aligned with Labour on social issues but are more distinct from them on the economic scale, occupying something of a ‘centre’ position between Labour and Conservative voters.

This reinforces the picture of party competition at the election, which led to the Conservatives maintaining their vote share from 2017 while the Labour vote fractured in multiple directions.

In terms of the value space, the Conservatives are quite isolated, but this proved to be a benefit in 2019, as it meant that there was little competition for their voters.

While for those in the position occupied by Labour voters, there were several options.

A way to further understand this is to look at the value positions of different groups of voters depending on their previous vote in 2017.

First, it is important to remember that the sizes of these groups are far from equal.

Among 2017 Conservative voters who also voted in 2019, more than four-fifths voted Conservative again. Just 4% switched to Labour and 7% to the Liberal Democrats. 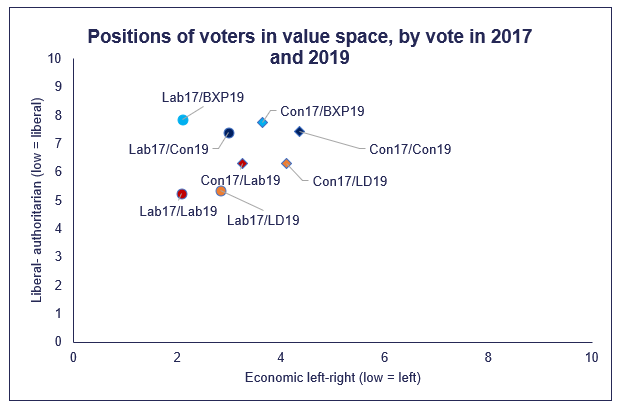 In the chart above, a circle indicates Labour 2017 voters and a diamond indicates Conservative voters in 2017, while colours (and labels) indicate vote in 2019.

While much has been made of the social values, and Brexit position, of these voters, the pattern here reveals that they were also closer to the centre of the economic left-right scale than were 2017 Labour voters who again voted Labour.

This is also true of those who voted Liberal Democrat in 2019, having voted Labour in 2017.

It is worth stressing this point given the focus on the social values of these voters since the election.

While those who switched to Conservative are some distance from the ‘loyal’ Labour voters on the liberal authoritarian scale, they are still located on the ‘left’ of the economic scale.

However, they are not as ‘left-wing’ on economics as are those who voted Labour twice.

For those who switched to the Liberal Democrats, there is no difference in their values on the liberal-authoritarian scale, but they are also not as ‘left-wing’ on economics as those who did not switch.

To win an election in 2024 Labour must win voters from the other parties, and particularly from the Conservatives.

This analysis suggests two potential strategies (which are not mutually exclusive).

The first, has been well rehearsed by political commentators since the election and means moving closer to those ‘lost’ voters on the kinds of social issues measured here by the liberal authoritarian scale.

This often elicits derision from Labour members who are unwilling to sacrifice their liberal values to win power.

A second strategy might be to think again about how the party appeals on the economic dimension.

The analysis above suggests that the voters that Labour lost were also a little more ‘moderate’ on these issues—this challenges the position that has taken root in some parts of the Labour Party that the economic policies in 2019 manifesto were popular.

There are also challenges for the Conservative Party.

On the surface at least, they appear to have accepted this rather more readily with talk of ‘levelling up’ in areas where they won constituencies from Labour, in some cases for the first time this century.

There may be trouble ahead.

For all political parties the need to understand how to appeal to voters across two distinct and uncorrelated values divides is urgent.

Voters are volatile, in part because they are trying to find ‘comfortable’ positions within a party and electoral system which offers relatively limited choice.

The party which is most able to reach out to the ‘other’ side across at least one of these divides is likely to win power.

In 2019, this was the Conservatives reaching across the left-right divide—whether Labour can do likewise on either economic or social issues remains to be seen.

By Paula Surridge, Political Sociologist at University of Bristol.