How to interpret the early election results

The exit poll – commissioned by the BBC, ITV and Sky News – is fast developing a track record for near bang-on-the-money accuracy.

However, there’s a reason we don’t all pack up and go home when Sir John Curtice makes his first appearance to give us his take on the way that results have fallen.

The seat-by-seat results still tell us a lot about what is happening.

Before 1.30am, the Press Association expect 18 seats in England and Wales, two in Scotland and one in Northern Ireland to be announced.

Needless to say, the first batch this evening will not be representative of the election across the UK.

On a basic level, these seats will rack up a set of early wins for the Labour Party: 15 of these 18 seats are held by Labour at the moment.

YouGov forecasts 14 to remain Labour held: only Jenny Chapman’s constituency of Darlington is expected to go from Red to Blue, on a 7% swing.

Whether it does, in fact, turn blue will be an early bellwether.

On another level, however, these seats could paint a disproportionately bad night for the Labour Party.

These constituencies are trending in the long term towards the Conservatives, compared to the national picture.

YouGov indicates that these early seats are expected to swing to the Tories at nearly double the rate of the country as a whole.

The national swing from Labour to Conservative suggested by the national forecast of a 9-point Tory lead across the country is 3.3%.

In these early seats, YouGov has the average at 5.8%.

What’s more, in nine of these seats, the expectation is a swing to the Conservatives of over 7%.

Put simply, then, most of the first seats to be announced are likely to stay Labour, but they’re also likely to show a disproportionate swing to the Conservatives.

Key to interpreting these early results will therefore not necessarily be who wins, but how results match up to expectations.

The first seats to be announced – including those by the super-speedy Newcastle and Sunderland city councils – will be revealing.

The most representative swings are often in safe seats

In 2017, of the first 25 seats to be announced, five of those most representative of the national result were safe seats, on both the Conservative and Labour sides.

Newcastle upon Tyne Central – an urban, but also relatively low-income seat – saw a swing of 2.1% from Conservative to Labour last time.

This was pretty much bang on the national result.

As a guide to what will happy more broadly in England and Wales, it is not a bad place to start.

Which seats will be most representative this time?

The big question is, of course, which seats will be most representative this time.

If YouGov’s poll is correct, the most representative of the early seats will be Workington, Swansea West and Sunderland Central – all are within 1% of the expected national swing. 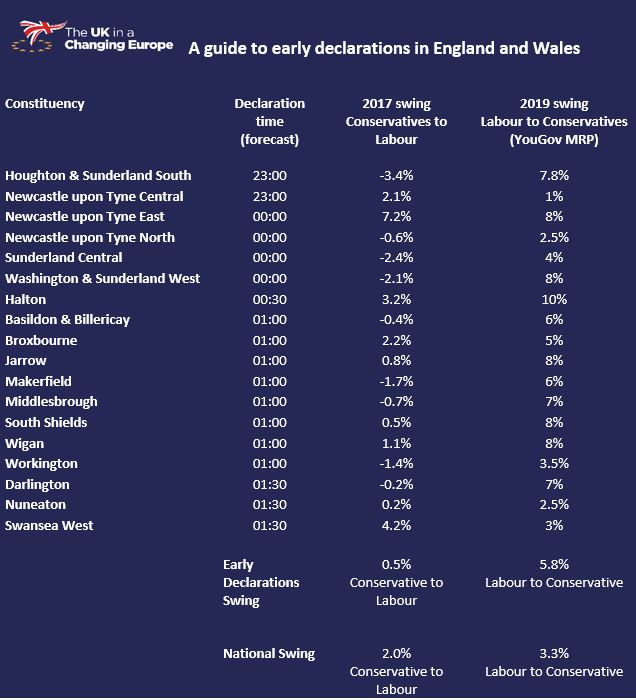 We should sound a note of caution, however.

While the MRP was relatively accurate last time for the national picture, its seat-by-seat performance was more mixed.

Ultimately, although the wider picture will take some time to emerge, it may be possible to discern the basic trends within the first couple of hours.

The early Scottish and Northern Irish seats are key battles

Rutherglen and Hamilton West will be the first Scottish seat to announce, and is too close to call between the Labour and the SNP.

Counterintuitively, if the SNP win it might not be the end of the world for Labour: Jeremy Corbyn will be partly reliant on an SNP surge that will disproportionately hit the Conservative Party north of the border.

In Northern Ireland, North Down is a fascinating seat: previously represented by Lady Sylvia Hermon, polling suggests it offers the best chance of victory for the cross-community Alliance Party.

By Dr Alan Wager and Matt Bevington, researchers at the UK in a Changing Europe.