The EU’s free movement rules have, in recent years, functioned as a major constraint on the ability of British governments to respond to public concerns by reducing migration inflows or making migration more selective. British voters are now well aware of this.

Yet while the desire for control over immigration was a major driver of Leave voting in 2016, there has been a major shift in public sentiment since. The share of voters in IPSOS-MORI’s regular ‘issues index’ poll naming immigration as one of the most important problems facing the country has more than halved, from around 45% in the months leading up to the referendum to under 20% – the lowest level since 2001.

The British Election Study also shows a shift in the public mood. There was a large rise in the share of people saying immigration was economically beneficial and culturally enriching in the first wave of data they collected after the EU referendum, a shift which has been sustained in the three waves published since (see figure 1 below).

A panel study from IPSOS-MORI showed a similar positive shift in views about the impact of immigration after the Brexit vote, with positive views outnumbering negative for the first time in the study. Other sources have painted a similar picture. The public mood about immigration is the most positive we have seen for many years. 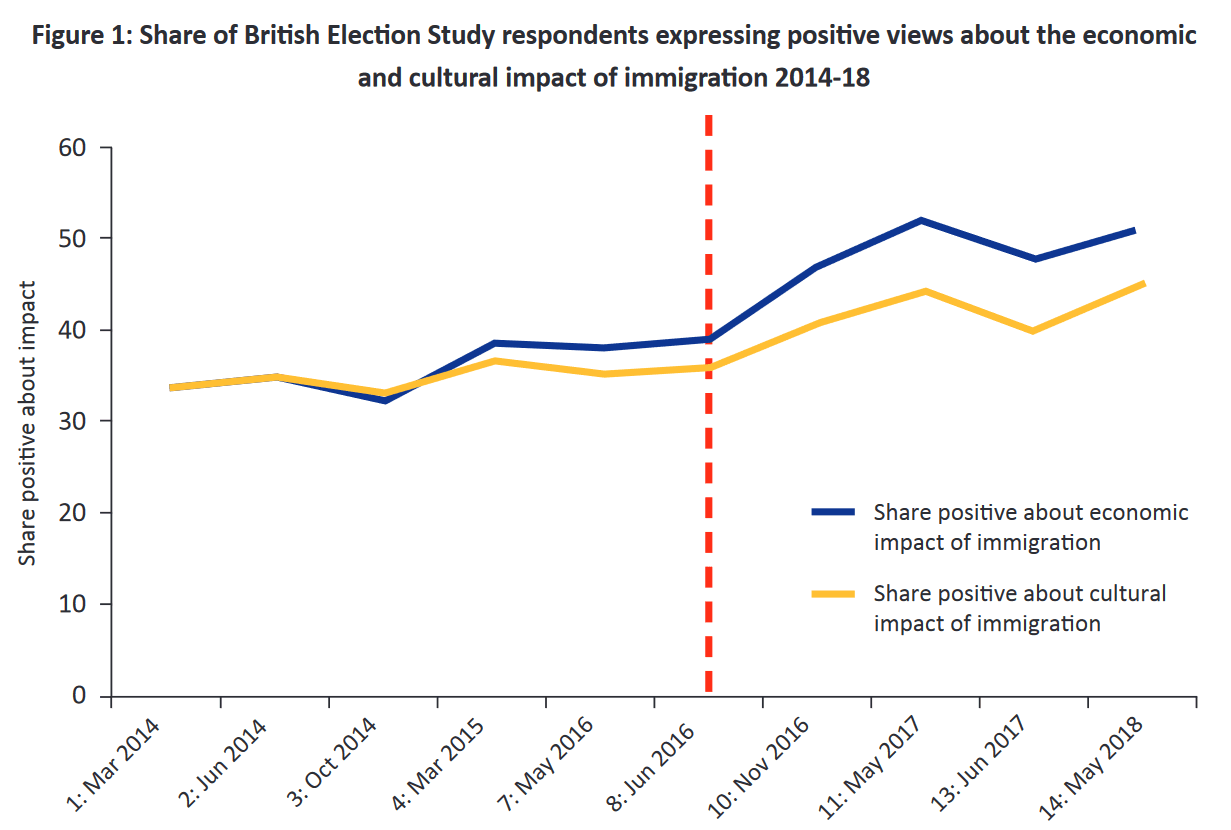 This shift in the public mood has important implications for the Brexit negotiations, where an end to free movement has been the government’s most consistent and non-negotiable priority.

The British Social Attitudes mixed methods panel showed 74% of those interviewed in September 2016 wanted EU migrants to go through the same control processes as non-EU migrants. This had fallen 15 points to 59% in the last panel results in June 2018.

After the referendum 51% thought free movement of EU migrants was not a price worth paying to ensure British firms’ access to the single market. In June 2018, this figure had fallen to 39%. The Prime Minister’s decision to prioritise immigration control over single market access, a key driver of the choice to opt for a ‘hard Brexit’ with departure from the EU single market and customs union, thus may no longer enjoy majority public support. 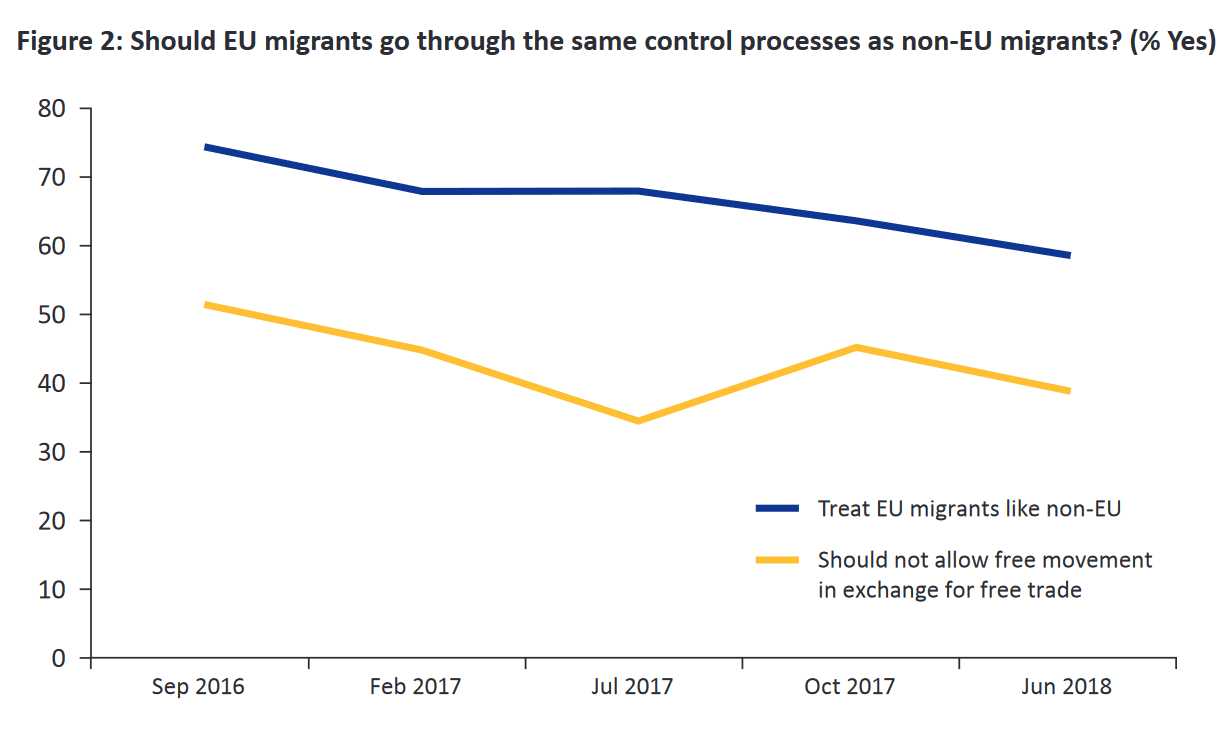 The final terms of Britain’s exit from the EU remain unknown, but we do now know rather more about the government’s plans for migration reform after Brexit, following the publication in December 2018 of ‘The UK’s future skills-based immigration system’ – the White Paper outlining post-Brexit migration policy plans.

As the name suggests, the White Paper envisages a greater focus on skills, with the scrapping of the cap on inflows of skilled migrants and tighter controls on unskilled migrants introduced. A single system of migration control will apply to migrants from within and outside the EU.

The White Paper also makes no mention of the government’s target to reduce net migration to ‘tens of thousands’ a year, suggesting this longstanding and contentious policy may be on the way out.

Many of these proposals fit well with public migration preferences. The net migration target has long been regarded as unachievable by most voters – for example a 2017 MORI poll for British Future showed only 14% of respondents, and 12% of Conservative voters, thought the target would be met within five years.

Quietly abandoning a policy so lacking in credibility will do little harm. The same poll showed strong support for a more flexible regime, with large majorities in favour of separate targets for different kinds of migration, and for introducing controls on unskilled but not skilled migration.

The greater emphasis on skills also fits well with public opinion. There is a strong preference for skilled over unskilled migrants, which is shared by British migration sceptics and enthusiasts alike and is also found in many other European countries. Stricter control of unskilled migration is also likely to be popular.

Another reform from the White Paper, restoring some post-study work options to foreign students, is also in line with public opinion. Several studies have highlighted very positive public views of this migrant group.

The binary skilled/unskilled distinction is very broad, however, and there is a great deal of granular variation in which occupations and skills the public regard positively. As Sunder Katwala outlines in this report, voters are ‘balancers’ on migration – able and willing to make nuanced judgements about the relative costs and benefits of different forms of migration.

It therefore makes sense to introduce a more flexible and transparent policy that enables priorities and distinctions to evolve in response to changing demands in the economy and the electorate.

A common approach for migrants from all origins also fits with public preferences. British Social Surveys conducted before and after the EU referendum show little or no public preference for European over non-European migrants, in terms of how migrants are viewed, whether their numbers should be reduced, or how quickly they should be able to access political and social rights. Skills matter much more to voters than origins, so a single migration system focussed on skills is a good fit with public opinion.

There are grounds for thinking migration may be a less divisive issue after Brexit, at least initially. Concern about the issue has sharply declined, British voters have become more aware of the benefits migration brings, and the government’s proposed post-Brexit approach to the issue is a better fit with the priorities voters express.

However, there are also good reasons to think arguments over migration will continue as migration remains a very polarising issue, and has become a central part of the deeper divides over identity and values that are driving growing political conflicts between graduates and school leavers, and between younger and older generations. Brexit and the reforms which follow it may take the heat out of the issue for now, but new arguments are sure to come.