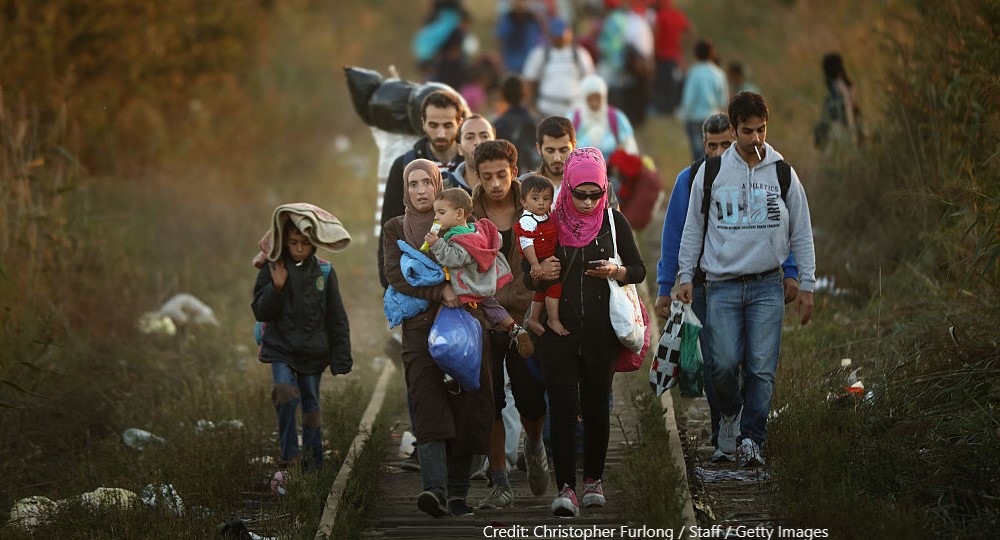 Immigration has long been one of the most important issues in European politics. Mainstream European parties have been increasingly challenged by anti-immigration far-right parties, while in countries like Hungary and Poland these far-right parties have been in power for several years. Closer to home, the Brexit vote came about in large part because of public opposition to immigration.

Although the arrival of Covid-19 reduced the salience of immigration, this seems a temporary reprieve: indeed, political turmoil in Syria and now Afghanistan makes it very likely that immigration will rapidly rise again to the top of political agendas. It may seem like this is an issue that is set to divide European publics for the foreseeable future.

Our research suggests that this may not be the case, though.

This debate between the backlash and habituation theories has remained unresolved because testing these theories requires data collected over a long period of time. The difficulty is that consistent cross-time data on immigration opinions is exceedingly rare.

We therefore used a technique pioneered by one of the authors to combine responses to immigration questions over multiple surveys between 1988 and 2017 across 30 European democracies.

We looked at two aspects of opinion: (1) general immigration mood – whether the public regards immigrants favourably, immigration as desirable, and prefer a relatively more open immigration policy; (2) expressions of concern about immigration when asked what the most important issues facing the country are.

We found some important differences across time and countries that suggest that publics may indeed be becoming habituated to immigration. 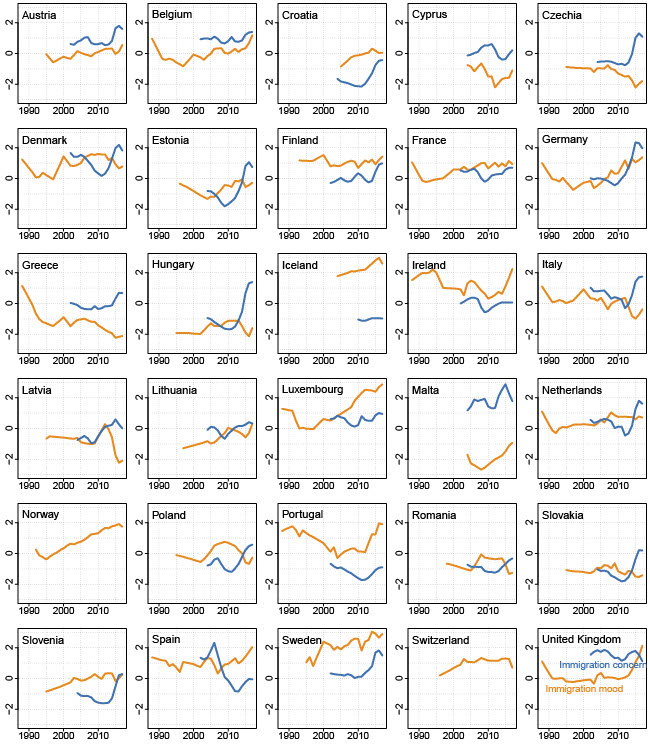 Looking at Figure 1, we see that in countries with longer experience with immigration and larger immigrant-origin populations (e.g., Belgium, Denmark, Germany, France, Luxembourg, Netherlands, most of Southern Europe, Ireland), immigration mood tends to be more positive (or supportive) compared to countries with less experience with immigration and smaller immigrant-origin populations (central and eastern European countries).

The more positive immigration mood (on average) in the countries with long experience with immigration is one clue that people may be becoming habituated to immigration.

Next, looking at the cross-time trends in Figure 1, we see that in the western and southern European countries with longer immigration experience and higher immigrant numbers, immigration mood was relatively positive in the late 1980s, dipped in the early 1990s, and then turned positive again around the late 1990s.

In contrast, in many of the central and eastern European countries where the immigrant population has been relatively low until recently, immigration mood was generally already relatively negative, and then became even more so around the time of the 2015 refugee crisis.

Figure 1 also shows fluctuation in our immigration concern indicator, demonstrating the potential importance of considering both mood and concern: in some countries, the two indicators appear to track each other in the expected direction (a rise in concern appears to be associated with more negative mood), while in other countries the two indicators seem to diverge. 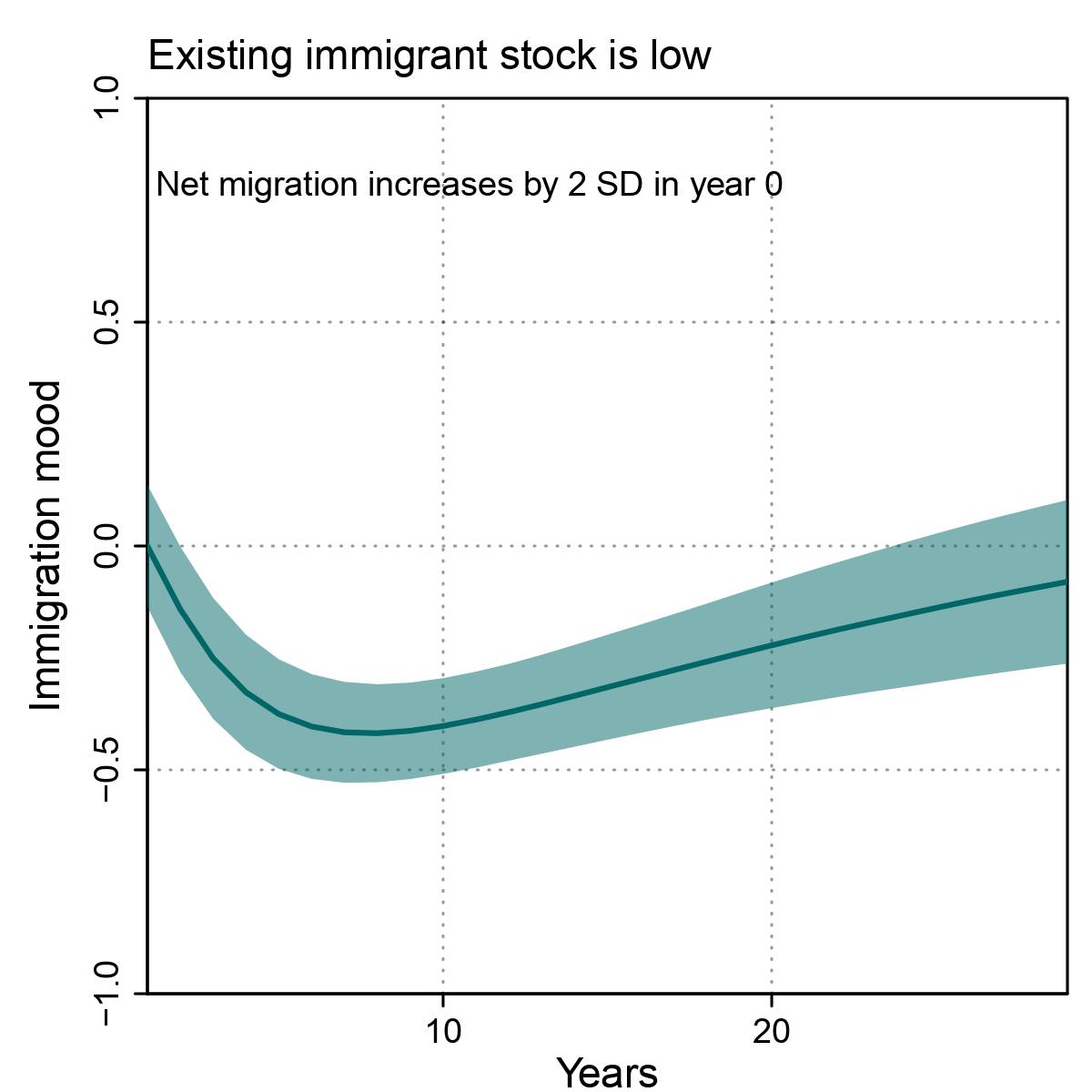 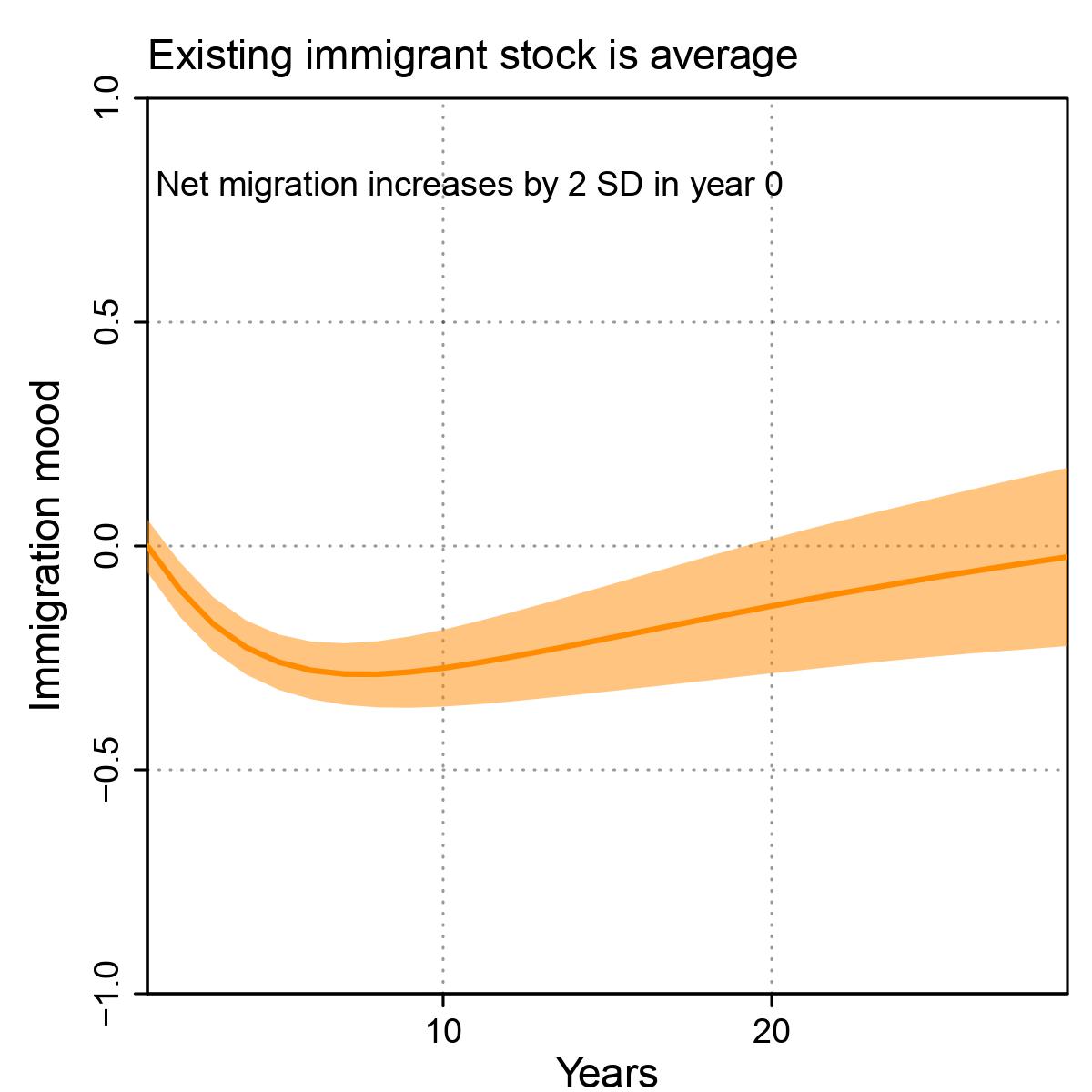 Focusing on Figure 2a, we see that a relatively large increase in net migration does seem to produce a significant dip in immigration mood. Figure 2b shows that the dip in mood is a bit smaller for countries that already have quite a few immigrants in the country.

This may be another clue that people in these countries have adapted to their countries being ‘countries of immigration’, in that they react less strongly to sudden increases in net migration. Both graphs also show how the initial dip in mood starts to change after a decade or so and mood returns to previous, more positive levels. 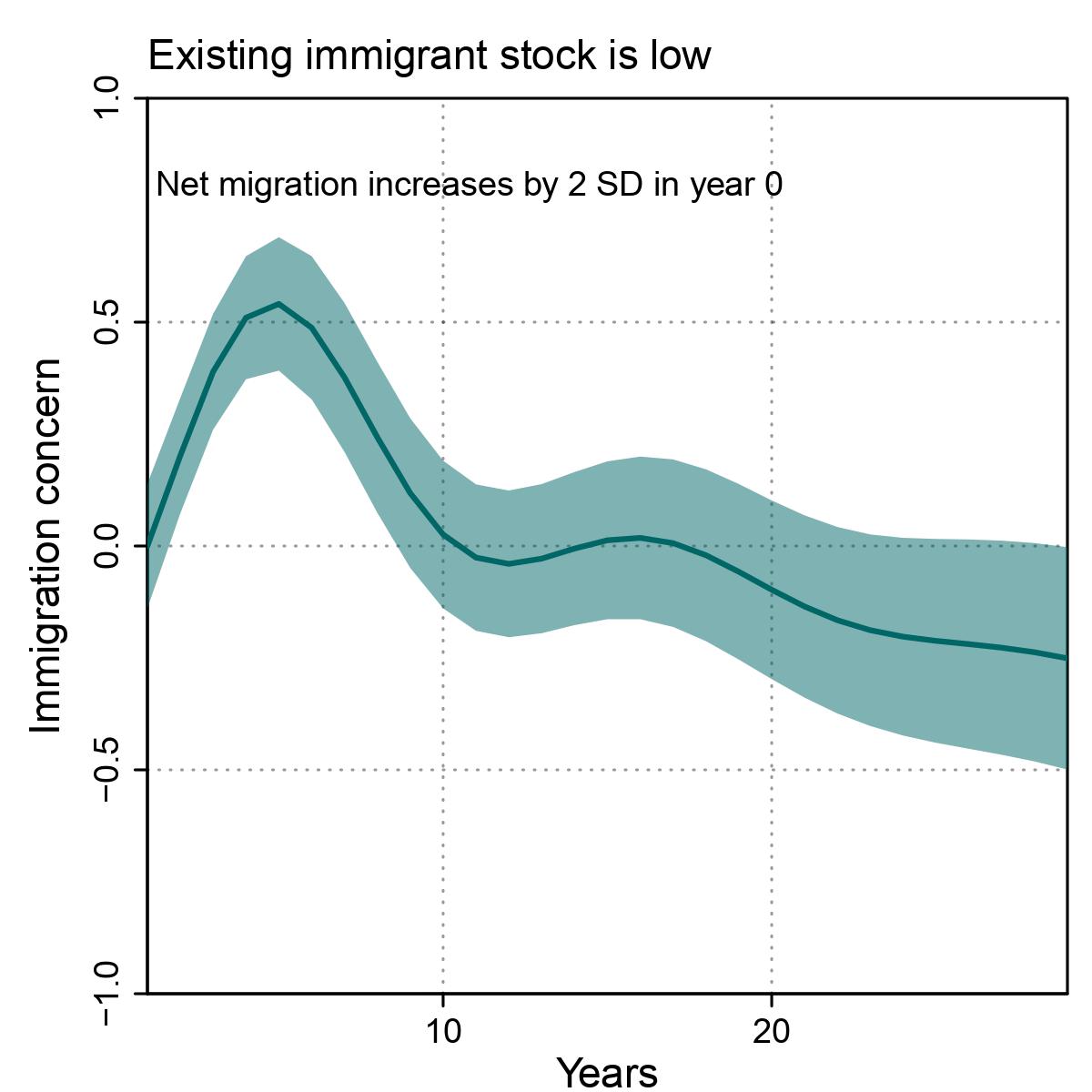 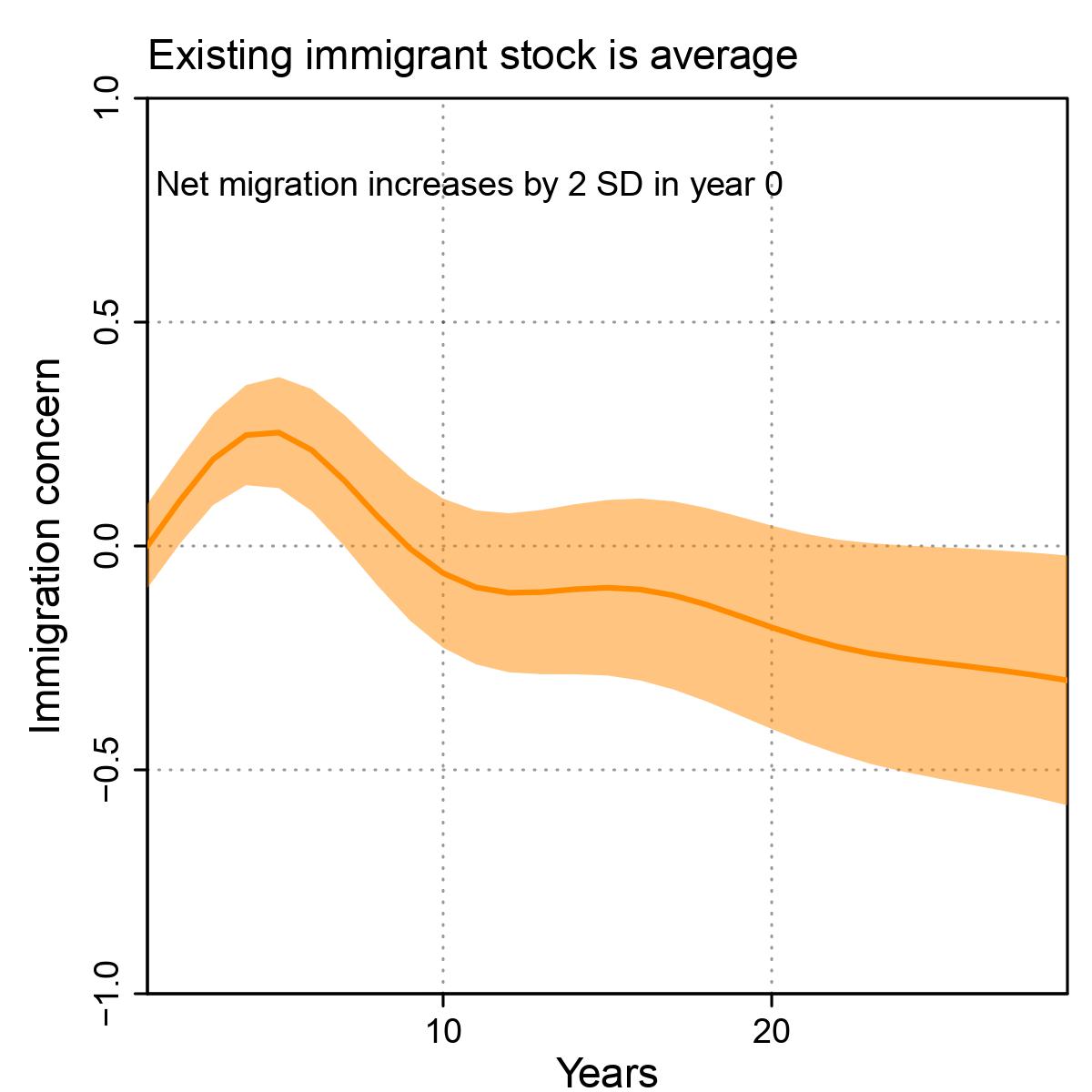 We see similar patterns for immigration concern in Figure 3: an increase in net migration prompts an increase in concern about immigration in the short term that then levels off, and the size of the increase is larger in countries where immigrant numbers are lower to begin with.

Thus it seems that immigration mood becomes more negative and immigration concern increases when there are sharp increases in net migration. However, these public reactions are relatively short-lived, and within one (concern) to three (mood) decades, the initial negative response to immigration dissipates.

Our analysis suggests that future increases in immigration to the UK do have the potential to produce negative public reactions, whether in the form of reduced public support for immigration or increased concern.

Yet these effects are likely to be fairly modest in scale given the UK’s long experience with immigration. They are also likely to be temporary (especially immigration concern) as the public becomes habituated to the new migrants who have settled in the country.

Ultimately, when considering whether to restrict immigration, governments must weigh up the potential benefit of avoiding the short-term public backlashes illustrated here, against other concerns such as potential damage to the economy and public services.

In addition, policy makers should be mindful that any short-term backlash is likely to dissipate as domestic populations continue to adapt to immigration to the point that it (potentially) becomes far less divisive.