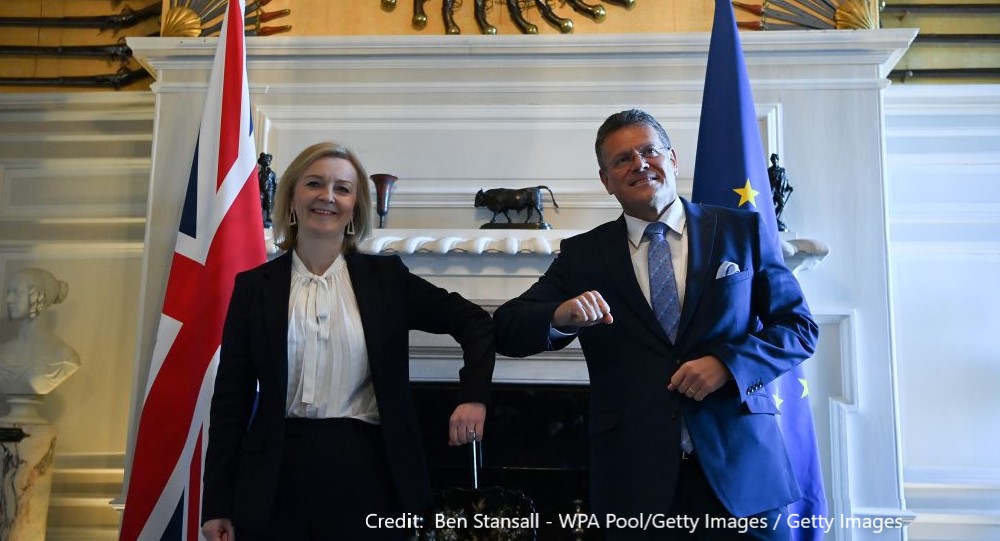 Commentators often say that the UK and the EU should be working together. After all, they are close neighbours, the EU is the UK’s largest trade partner, and the UK and EU have shared interests to realise, as shown by the war in Ukraine.

However, there is a major political problem at the centre of the relationship. Since the Protocol on Ireland and Northern Ireland came into force on 1 January 2021, disputes over the (non) implementation of the Protocol have gradually eroded trust between the two parties and risk a stalemate in the broader UK-EU relationship.

The UK has been calling for renegotiation of the Protocol since July 2021, whereas the European Commission and the EU member states insist that solutions must be found within the framework of the Protocol. The latter emphasise that Boris Johnson negotiated and signed the deal and that Parliament consented to its implementation.

Progress on unfinished elements of the Trade and Cooperation Agreement (TCA) appears to be a hostage to the ongoing issues around the (non) implementation of the Protocol.

For example, the UK’s participation in Union Programmes, such as Horizon Europe, the EU’s key funding programme for research and innovation, seems to be permanently delayed. In autumn 2021, the European Commissioner responsible for Research and Innovation, Mariya Gabriel, stated that the EU is waiting for ‘transversal’ political issues to be resolved before it moves forward with association talks.

At the end of April 2022, in a letter to the Earl of Kinnoull, Chair of the House of Lords’ European Affairs Committee, she confirmed the link to the Protocol by referring to ‘the current setting of the relationship’ with ‘serious difficulties in the implementation of the Withdrawal agreement’. The UK Government stated in May 2022 that it cannot wait indefinitely and will soon start envisaging ‘alternative programmes’.

Furthermore, although the TCA did not include financial services, both parties committed to future regulatory cooperation in an attached non-binding Joint Declaration, underpinned by a Memorandum of Understanding (MoU) to be agreed by March 2021. The MoU would provide a framework for co-operation on supervisory and regulatory issues for financial stability purposes, but would not grant the UK access to the EU single market in financial services.

The parties duly agreed a MoU by that deadline, but have not yet signed it. The Economic Secretary to the Treasury, John Glen, recently stated that the UK is ready to sign up to the MoU but that ‘the EU, for whatever reason, is not in a position to’. The Financial Times called the MoU ‘a casualty of EU anger over the UK’s demands to redraw the Protocol’.

Indeed, the European Commissioner for Financial services, Mairead McGuinness, confirmed in February 2022 that ‘the technical work is done’ but that moving forward is contingent on resolving the issues on the Protocol. She added ‘everything is tied into the political atmosphere’.

In addition, in the autumn of 2021, reports emerged that member states were considering suspending entire parts of the TCA in the case the UK decided to suspend parts of the Northern Ireland Protocol. TCA provisions can be suspended in the case of persistent non-compliance of arbitration rulings of previous agreements between the UK and the EU (Art 749.4 of the TCA).

The UK’s repeated public statements since July 2021 that the option to trigger Article 16 of the Protocol remained ‘very much on the table’ had exasperated some member states and overshadowed the ongoing discussions to find solutions on the implementation of the Protocol.

Whilst the EU and some heads of state were quick to downplay the possibility of a trade-war, it does exemplify the potential ramifications for the broader UK-EU relationship if the UK were to unilaterally override aspects of the Protocol.

Indeed, the prospect of an escalation into a trade-war resurfaced in May 2022 when the UK government announced its intention to introduce legislation that would enable Ministers to override aspects of the Protocol. The EU has stated that ‘should the UK decide to move ahead with a bill disapplying constitutive elements of the Protocol, the EU will need to respond with all measures at its disposal’.

More tangentially, the issue has also affected the UK’s ability to move forward with negotiations of a trade deal with the US. The problems first led to delays in Washington’s decision to lift a tariff on UK steel in 2021 – the agreement finally came late March 2022.

Katherine Tai, Washington’s trade representative, warned in April 2022 that the Protocol continues to be a major issue and that the US is watching closely, while Speaker of the House of Representatives Nancy Pelosi stated in May 2022 that any UK action that undermines the Good Friday Agreement would end the prospects of a deal.

The President of the US has also spoken directly and publicly to Boris Johnson about his concerns for maintaining peace on the island of Ireland and that any solution must include the EU.

Moreover, in late March 2022 the EU launched its first dispute with the UK in the World Trade Organization (WTO). The EU is challenging UK subsidies offered to domestic suppliers of wind turbines, contending that the UK has failed to address concerns that the EU has raised several times.

If no satisfactory solution emerges within 60 days, the EU can request the WTO to set up a panel to rule on the matter. This opens another front in the ongoing fraught relationship between the UK and the EU and potentially exposes to the UK to being found in breach of WTO rules.

Eighteen months after the TCA came into force, the ongoing problems over the (non) implementation of the Protocol have led the broader UK-EU relationship into an impasse. For the EU, the erosion of trust now means that finding common solutions to the implementation of the Protocol is ‘a precondition for a constructive bilateral relationship‘. Until this political problem is addressed, any impetus around shared interests in the UK-EU relationship will remain fleeting or largely abstract.