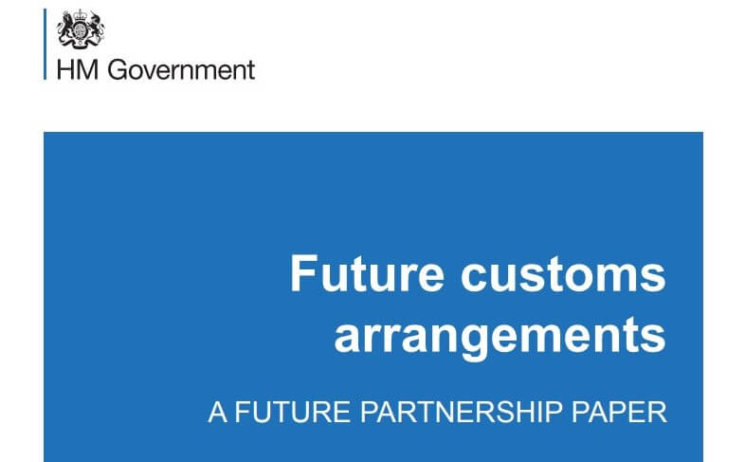 The UK government’s new position paper on future customs arrangements sets out objectives for how goods trade with the EU will be governed following Brexit. The most welcome aspect of the paper is its acknowledgement of the desirability of a transition agreement after the UK leaves the EU. A transition deal will avoid the risks of a cliff-edge Brexit in March 2019 and give the two sides time to negotiate a new trade agreement.

The paper suggests the transition agreement could involve a “continued close association with the EU customs union for a time-limited period … based on a shared external tariff and without customs processes and duties”. In effect it proposes that the UK remains in the customs union, although this is never explicitly stated.

Beyond the transition agreement, there is little new in this paper. Despite losing its majority in June’s general election, the government remains committed to the leaving the EU’s customs union in the long-run. Why the UK should leave the customs union is not explained and much of the paper is devoted to discussing how to mitigate problems that will result from leaving the customs union. Once the transition agreement expires, the government will seek a “new customs arrangement that facilitates the freest and most frictionless trade possible”.

The paper puts forward two approaches to achieving this objective: streamlining customs procedures between the UK and the EU as much as possible, or; a customs partnership in which there is no need for a customs border because the UK mirrors the EU’s import requirement for goods whose final destination is the EU. Both approaches are worth exploring further, but the hard work of assessing whether these ideas could work in practice has yet to be done. In any event, neither option could ever fully mitigate the increase in red tape and trade costs caused by leaving the customs union.

Overall, the paper suggests the government is in the early stages of developing its vision for the future of UK-EU trade relations and still wants to both have its cake and eat it. Worryingly, the paper does not explicitly address the trade-off between economic integration and political sovereignty the UK will face during the Brexit process. Here are five important questions about the UK’s position that the paper does not answer.

By contrast, the position paper suggests the UK wants to remain in the customs union during the transition. If the UK is in the EU’s customs union, it must impose the EU’s common external tariff on trade with the rest of the world, meaning Liam Fox cannot sign any new trade deals with non-EU countries. If the UK is not in the customs union, there will be customs procedures on UK-EU trade and the costs of trade will rise. The paper attempts to fudge this distinction, but the choice is unavoidable and needs to be faced.

For this reason, it would be simplest for the UK to seek an off-the-shelf arrangement, such as continued membership of the Single Market or the European Free Trade Association (EFTA). The more the UK seeks to customise the transition agreement, the more complex and time-consuming the negotiations will become and the lower the probability of reaching an agreement. This increases uncertainty and raises the chances of a no-deal Brexit.

3. Why would the EU agree to these proposals for a transition agreement? The EU holds the balance of power in the Brexit talks since it stands to lose less than the UK if talks break down. Consequently, understanding the EU’s objectives is useful for predicting the likely outcome of negotiations. The EU’s primary goal is to ensure its continued unity by protecting the integrity of its institutions. This means the EU will not allow the UK to cherry-pick the contents of any post-Brexit deal.

The proposal for a partial customs union during the transition period is an attempt at cherry-picking and prompted the European Parliament’s Brexit co-ordinator Guy Verhofstadt to tweet that “To be in & out of the customs union … is a fantasy”. Unless the UK is willing to offer the EU something substantive in return, there is no reason to expect the EU will agree to this transition proposal.

4. What arrangements will the government seek to govern trade in services with the EU? The position paper focuses on customs arrangements for trade in goods, but barely mentions services which accounted for 45 percent of UK exports in 2016. Leaving the single market will make it harder for UK services firms to export to the EU, particularly in areas such as financial services where the UK will lose passporting rights. The future of agricultural trade is also not discussed. Turkey’s customs union with the EU does not cover agriculture and it is unclear whether the EU would be willing to include agriculture in any transition agreement.

5. Has the government undertaken an impact assessment of its proposals? There are many options for what Brexit could entail and no consensus for which option the UK should seek. In broad terms, the UK faces a trade-off between minimising the economic costs of Brexit by remaining closely integrated with the EU and taking back control by severing ties with the EU.

Why has the government decided that leaving the customs union is in the UK’s best interests? What evidence has informed this decision? Either no impact assessment exists, or the government is keeping the findings of its impact assessment secret. Neither option is desirable. Given the importance of Brexit for the UK’s future and its lack of a parliamentary majority, the government should be as transparent as possible about how it decides the meaning of Brexit.

By Dr Thomas Sampson, research leader at The UK in a Changing Europe and Assistant Professor, Department of Economics, London School of Economics. This piece originally featured on LSE Brexit.