Indicative votes 2: the numbers and the politics 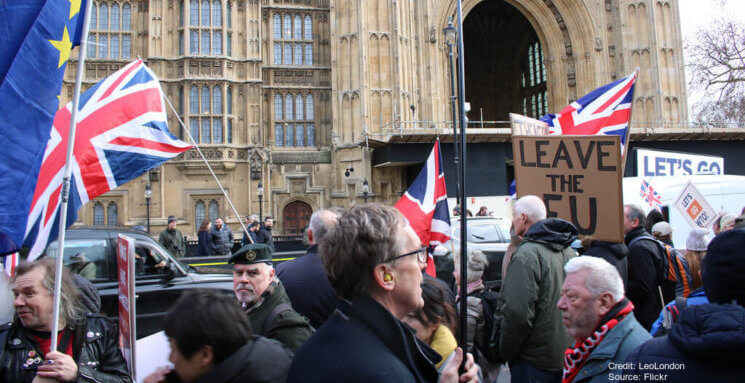 Much of the coverage of the indicative votes process has been overly cynical. The conclusion many drew from the first round was that MPs couldn’t make up their minds. However, it was always going to take more than one set of votes to find if and where a cross-party consensus may lie.

The only way the indicative votes can be in any sense ‘meaningful’ is for one of the options to get an absolute majority. That means getting something around 319 votes. None came close in the first round. A confirmatory referendum, which received the most support, got 268 votes in favour, but this remained some 60 votes shy of absolute majority territory. So can any achieve such a majority in the second round?

First, there’s a distinction to make between the number of votes each received in the first round and their potential in the second round. Although Common Market 2.0 received the least support of the three main options to be voted on in the second round, it also had the most abstentions.

That means should all of those (minus the Cabinet) who abstained, 139 MPs, support it next time around, it at least has the potential to get a majority in the Commons of 327 votes.

The same can’t be said of a confirmatory referendum. It may have received the most votes in favour in the first round, but it had the least number of abstentions. That’s because it is a much more divisive option on which MPs have a more fixed position. Even if all 47 MPs who abstained supported it next time (which won’t happen), it would still be short of the votes needed for a majority – a maximum of 315. 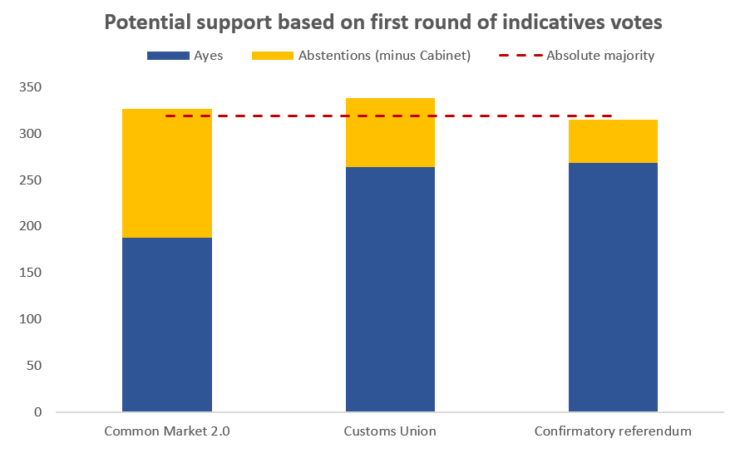 What is the likely outcome? Based on the first round of indicative votes, the referendum option – despite getting the highest number of votes in favour – only came third for both main parties in terms of the number of their MPs voting in favour.

Given they collectively control some 87% of the voting power, it will be difficult for a referendum to maintain its position as the most popular option this time. The parties for whom a referendum is their first preference – the SNP, Lib Dems, the Independent Group (TIG), Plaid Cymru and the Greens – only control around 10% of the votes.

By contrast, a customs union was the second-most voted-for option by both the Conservatives and Labour. It has the potential, based on those who abstained last time, to reach 338 votes in favour – well above the threshold for an absolute majority.

The SNP, Lib Dems (minus two of their MPs, one who voted for and one who voted against) and Plaid – amounting to some 48 votes – all abstained. Their votes, plus a few more Conservatives abstainers or TIG MPs, who voted against, could easily push this option into absolute majority territory.

The Common Market 2.0 motion will benefit from Labour and SNP whipping in favour this time, which could add as many as 100 more votes to its tally. However, it has a lot of ground to make up to reach an absolute majority and still looks like it may struggle to do so.

Achieving an absolute majority is crucial because the government is unlikely to run with any winning option voluntarily. Conservative votes in the first round clearly showed that a majority of the parliamentary party was against all of the options most likely to come back in a second round: Common Market 2.0, a customs union, Labour’s plan or a referendum. The most popular option among Tories, Common Market 2.0, received just 37 votes in favour (and 225 against).

The result of the process will not be legally binding either, so the government could well decide to ignore the outcome, leaving us back at square one. As Theresa May said clearly to the Commons following the European Council summit: “No Government could give a blank cheque to commit to an outcome without knowing what it is. So I cannot commit the Government to delivering the outcome of any votes held by this house.”

However, if an absolute majority were achieved for one or more of the options, the government would be left with little choice but to accept it. Otherwise it could risk being forced to do so later anyway, further damaging relations between the executive and the legislature. If that threshold wasn’t reached, the government could still tenably argue that the Commons had not found a reliable majority on which it could act.

The only way for the indicative votes process to succeed is for such a majority to be found. Anything short of that and it risks achieving little but running down the clock.

By Matt Bevington, policy researcher for The UK in a Changing Europe.