IndyRef2: back to the future? 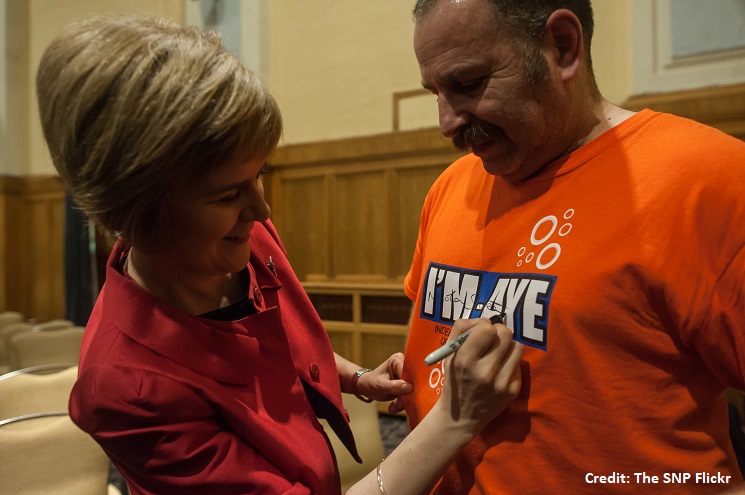 The hashtag IndyRef2 sweeps across the UK twitterverse with regularity. It has recently been trending again, due to the strong Conservative victory in last year’s general election.

However, while this was a clear victory for the Conservative and Unionist Party of the United Kingdom, it was accompanied by an even stronger Scottish National Party (SNP) victory within Scotland.

The Conservatives gained 47 seats across the UK, but they lost seven seats in Scotland. The SNP took every one of those, and also took six seats from Scottish Labour, leaving that party only one seat in Scotland (as was the case between 2015 and 2017).

The overall result gave the SNP 48 of the 59 Scottish seats at Westminster, with a very sturdy 45% share of the vote.

If the Conservatives can claim a strong mandate with their UK-wide 43.6% share of the vote, then the SNP, who only stand candidates in Scotland, can surely point to a mandate of their own?

Nicola Sturgeon, the First Minister of Scotland and leader of the SNP, did just that after the December victory, when she wrote to the UK government on the matter of an independence referendum.

She provided almost 40 pages of argument as to why the Scottish government should have the power to call such a referendum.

Her request was unlike the Edinburgh Agreement of 2014, where the Scottish government sought a Section 30 order – under which the UK government then granted the authority to run a referendum.

What was asked for this time was the full (and permanent) transfer of authority to hold a referendum on independence to the Scottish parliament. Perhaps unsurprisingly, the answer from the Prime Minister to that request was short and specific. He said No.

In his one page letter Boris Johnson argued that the 2014 referendum had been predicated on the ‘once in a lifetime’ decision, and that the result had been a decisive one to stay in the United Kingdom.

He further cited the agreement of both the governments to ‘respect’ the result of that vote, and that based upon this decision, he would not agree to ‘any request for a transfer of power’ in order to hold another referendum.

He further stated that another referendum would only continue ‘the political stagnation’ within Scotland, and argued that the independence campaign had resulted in Scottish jobs, hospitals and schools being ‘left behind’.

In many ways, Boris Johnson’s letter issues many of the same tropes discussed during and since the 2019 general election: the idea that other parties had left communities behind and these had turned to the Conservatives, the only party able to pull the United Kingdom together at this time.

This was the final sentence in the letter to Nicola Sturgeon.

Johnson’s response is not unsurprising.

While it may well be that the Conservative government may change its collective mind on holding a referendum, it is highly unlikely it would allow a full transfer of that authority in the future.

IndyRef2 is very likely to be agreed in the same fashion as that of 2014, with an agreement between the two bodies on one referendum event. At the same time, such a change of mind may well be some time in coming.

In his televised ‘People’s PMQs’, Johnson doubled down on his remarks, stating that five years was not a generation, nor was 10 or even 15, and it could be a long time, if ever, before the question was ‘put back to the people’.

It remains that while the Conservatives lost seven Scottish seats at the December 2019 election, and have only six MPs in Scotland, they have a significant majority in the House of Commons and can afford to ignore the SNP, as much as they can ignore the official opposition, the Labour Party.

How long the Prime Minister can ignore Scotland’s public opinion remains to be seen. While polls in Scotland currently indicate that IndyRef2 could be close, there is no clear winning level of support for Scottish independence appearing in the polls themselves.

What is evident in a recent poll is that over 60% of people in Scotland feel that the decision about Scotland’s future should be taken by the Scottish parliament.

Thus, a clear majority seem to favour the position of the First Minister that the decision-making authority to hold a referendum should be transferred to Holyrood.

Back in the 1980s, a large group of Scottish Labour MPs were called ‘the feeble Fifty’ for their inability to influence the debate around devolution and the potential creation of a Scottish parliament. It took a change of government brought about by the Labour landslide of 1997 to change that.

The same problem now faces the contemporary SNP: with 48 seats out of 59, the SNP could well face accusations of having a ‘feeble Forty-Eight’, unable to draw Johnson into allowing IndyRef2 to be called.

But there is a distinct and clear difference between the 1980s and the 2020s, and that is the existence of the Scottish parliament.

In the 1980s, there was no distinct Scottish voice that could capture the mood of Scotland and influence the wider UK debate outside of Westminster.  Now, Scotland has a parliament, a government, and a distinct voice.

The next elections to Holyrood are on 6 May 2021 and there is no doubt that the decision of Boris Johnson to say a resounding ‘No’ to IndyRef2 is going to be a key part of that election discourse.

By Dr Murray Stewart Leith, Reader in Politics at the University of the West of Scotland.  His co-authored text ‘Scotland: The new state of an old nation’ will be published by Manchester University Press in April 2020.