International students in Scotland, Brexit and beyond 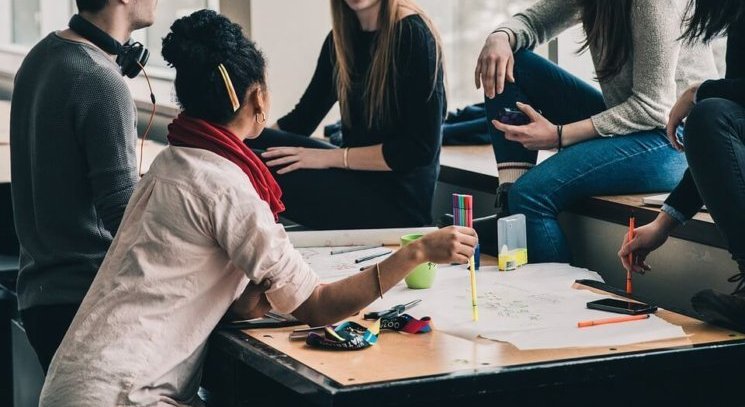 Scotland’s ability to attract international students in an increasingly competitive marketplace could be severely hindered by immigration policy, rhetoric, and Brexit negotiations.

We need to protect the important economic, demographic and cultural benefits that come along with our international student community and provide stronger evidence to inform immigration policy.

In recent years, Scotland has been relatively successful in attracting international students, but there are concerns about how geopolitical shifts such as Brexit could affect this.

Bearing in mind the value of the international student community to Scotland, we surely need to be mindful of protecting Scotland’s reputation.

Recent findings from a roundtable meeting held in Edinburgh show that a case can be made for an enhanced ‘offer’ to prospective students, especially around post-study work opportunities. Using more welcoming language and policy messages would also be helpful, as well as not including international students in the net migration cap.

Discussions from the roundtable meeting, held in Edinburgh in September 2018 and attended by 20 representatives from key stakeholder organisations, suggested that some of these measures could take place within the existing devolution framework, as evidenced by the Fresh Talent Initiative for example, or through enhanced devolution of controls over immigration to Holyrood.

The main thing we took away from the meeting is that we need more evidence to inform immigration policy. While there is a reasonable level of understanding of the overall financial impacts of international student migration, less is known about international students’ preferences and experiences, especially in how they interpret and respond to policies and political rhetoric surrounding migration.

Areas of particular interest are the movements and career paths of international students after they graduate in Scotland, and the factors that influence these transitions. Greater understanding and evidence in this area is key to being able to attract, and to retain, the mobile, skilled population groups that are central to Scotland’s demographic and economic stability and growth.

Scotland is an attractive destination for international students

Scotland has an excellent reputation with prospective international students, and students who do study in Scotland report high satisfaction levels. Aside from London’s pull as a major global city, Scotland is regarded as, and indeed is, one of the most popular places to study in the UK.

Study destination of international students in the UK by Government Office Region, 2016-2017 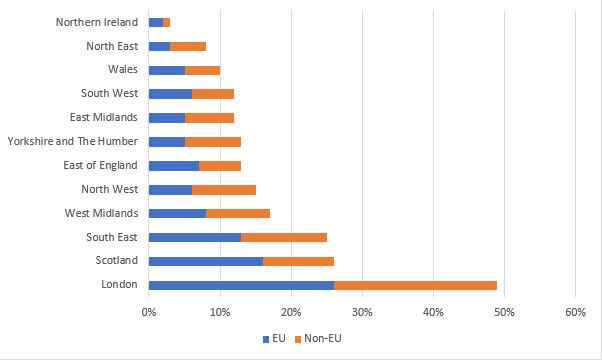 Scotland’s attractiveness was partly attributed to positive rhetoric around immigration in Scotland, such as ‘Scotland Is Now’ and ‘Scotland Welcomes the World’.

There was widespread agreement that international student migration is good for Scotland but that competing countries are seen as having a more attractive post-study work offer than Scotland/the UK.

This issue is particularly pertinent in Scotland given its demographics, the economic need for young, skilled graduates, and the importance of overseas students as an income stream in the Scottish higher and further education sectors.

Some attendees argued that Scotland/the UK actually does offer reasonable opportunities for post-study work, but that factors such as the net migration target and the ‘hostile environment’ policy towards irregular migrants were seen as having a negative impact on how Scotland/the UK welcomes international students.

In terms of policy recommendations, there were some recurring themes: removing students from the net migration cap; allowing international students greater work opportunities whilst studying; more time to secure a graduate level job post-graduation; and a lower salary cap for Scotland (nationwide or in lower wage/more rural areas).

A lack of certainty about future policy on international students, migration and employment means that study in Scotland/the UK is arguably thought of as riskier than elsewhere. As the chart below shows Scotland, and the UK generally, is falling behind its competitors in terms of attracting international students. 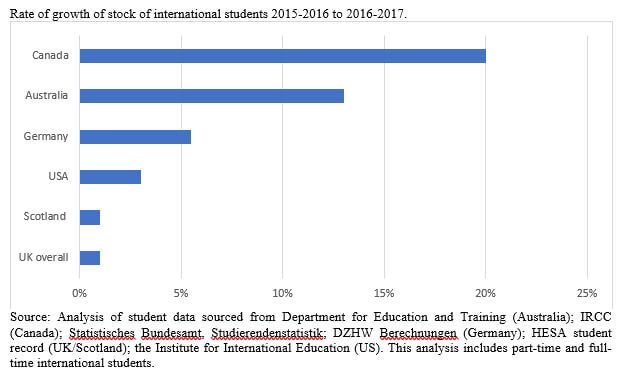 The issue of Scottish flexibility within the existing UK migration system

Control over immigration policy is an issue that remains in Westminster. The discussions at the roundtable suggest that there is uncertainty about how and whether different Scottish immigration policies are feasible.

Stakeholders argued that this could be achieved relatively easily (e.g. Scotland now has its own income tax code which could be used to detect where graduates are employed); while others felt that significant practical and political barriers exist.

Examples of sub-state immigration policy within the federal systems of Canada, Australia and Germany were highlighted as potential examples that Scotland could follow. It was noted that flexibility is feasible even without further devolution of immigration controls: the Fresh Talent Initiative, which saw the introduction of the post-study work visa, was centrally administered by the UK Home Office.

The existing but limited Scotland Only Shortage Occupation List could also be expanded within the current legislative framework. This would provide enhanced post-study work opportunities for graduates within specific sectors in Scotland.

Something everyone agreed on was that Brexit is currently overshadowing discussion of immigration policy at the Scottish and UK levels, and until this wider constitutional issue can be resolved, there is little prospect of progress on international student policy.

Finally, as the table below shows, the recently-released Migration Advisory Committee’s recommendations on UK policy towards international students offer some grounds for optimism but also concern for Scotland.