Is Bercow impartial on Brexit? 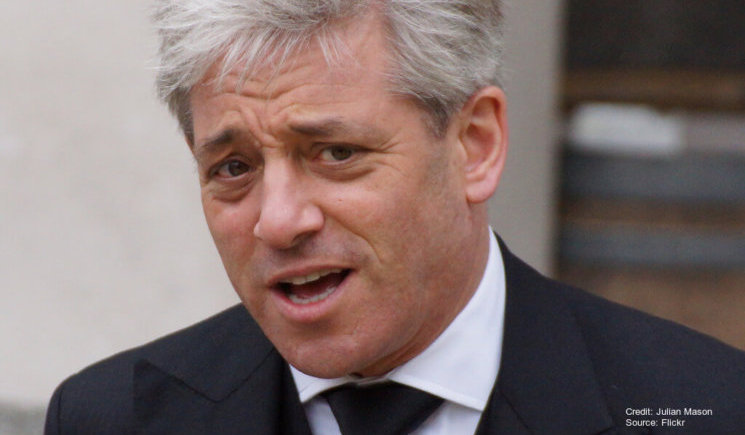 Andrea Leadsom caused a stir this week when she accused the House of Commons Speaker John Bercow of not standing by the impartiality which is meant to come with the Chair, because of his well-publicised views on Brexit.  Her comments came after the Speaker branded the government’s decision to delay Tuesday’s vote on the Brexit deal as ‘deeply discourteous’.

This is not the first time MPs have accused Bercow of being partisan – he has previously been criticised for saying that President Trump should not address Parliament, remember.

But during the process of the UK’s withdrawal from the EU the Speaker’s impartiality seems to have been questioned time and time again: The Telegraph reported in October that he had the power to ‘shape’ Brexit through his position in the Commons.

As Parliament’s own website tells us, impartiality is one of the most valued characteristics of the Commons Speaker. So how do we view Bercow’s interventions in this area?

The Brexit process has showcased four key roles played by the Speaker and his Deputies.

First, we’ve seen the power of the Speaker to call MPs to speak (or not) in the House of Commons Chamber, and to select amendments for debate.

The Brexit process has seen a series of pieces of legislation be debated in the chamber: most notably the EU (Notification of Withdrawal) Bill back in 2016-17 and the EU Withdrawal Bill in 2017-18, as well as debates on statements given by the Prime Minister and the Brexit Secretary of State on progress with the negotiations.

The occupant of the Chair during these debates has had to navigate an even tougher balance than usual: the Chair seeks to call MPs in proportion to the balance of political parties in the House, but also to represent views for and against the measure.

Deputy Speaker Lindsay Hoyle got into hot water with the SNP during the committee stage of the EU (Notification of Withdrawal) Bill for what they saw as his refusal to allow the SNP to contribute fully. Hoyle interpreted the debate differently, believing that he had gone the extra mile to get an additional SNP speaker in.

Likewise, there was concern during the meaningful vote debate last week that women MPs were not being called to speak.  This is backed up somewhat by the Huffington Post’s research which found that male MPs had spoken for 90% of the debates on Brexit.

Although the meaningful vote on 11 December did not go ahead, the Speaker had the responsibility for selecting six amendments to the motion for MPs to vote on, just as the Chair will always decide which amendments to select for debate during the consideration of a piece of legislation or the passage of a motion.

Parliament’s time is not infinite and thus some amendments must inevitably be prioritised over others. Usually, this will mean selecting amendments around which there is considerable support, or where they represent opposing sides of an argument.

Second, we’ve seen occasions where the Speaker has needed to give a ruling on a matter which is not always clear cut.

The recent contempt of Parliament decision is an example of this. Here, the Speaker needed to make a decision following a letter from the opposition parties requesting the consideration of a motion relating to privilege and the apparent failure of government ministers to comply with the Commons’ ruling from earlier in November about the publication of legal advice on Brexit.

Bercow told MPs that he had agreed that the motion should have precedence in the day’s business, shuffling the debate on the Withdrawal Agreement down the order of business. When the Commons passed the motion, he was again required to chair a series of Points of Order in which he clarified that he expected the government to comply with Parliament’s wishes.

Third (and related to the above example) we’ve seen the discretion through which the Speaker can allow MPs to use parliamentary procedure to hold the government to account.

Most prominent here throughout Bercow’s speakership has been the use of urgent questions on matters of public importance, which are asked directly after question time Monday-Thursday.

Urgent questions are not a new procedure, but have had something of a renaissance under Bercow: over 150 UQs were granted between 2015-17 and a further 160 since 2017.

These questions force a government minister to come to the chamber, and MPs have asked urgent questions on a whole range of issues, and in particular they have quizzed the government on Brexit issues and pressed for statements or clarifications.

Recent UQs have included Yvette Cooper’s request for a statement on the government’s interpretation of Section 13 of the EU Withdrawal Act and the likelihood of Parliament being asked to vote on the Brexit deal by 21 January (which followed on from a similar UQ asked by Dominic Grieve the previous month), and Keir Starmer’s request for a statement on the publication of legal advice.

Fourth, we’ve seen the necessity of the Speaker’s disciplinary powers in calling the House to order. At times this is required to keep debate civil and orderly, such as at PMQs last week when the Speaker ordered the SNP’s Ian Blackford to withdraw remarks about the Prime Minister misleading the House about her Brexit deal.

This week when he was forced to suspend Labour’s Lloyd Russell-Moyle from the chamber in accordance with Commons rules for picking up the mace in frustration at the government’s cancellation of the meaningful vote.

The aim of these such disciplinary measures is to maintain the right of any MP in the Commons to be heard – whether this be the Prime Minister herself, or an opposition backbencher.

In none of these areas is the Speaker (or his Deputies) carving out a new path. The powers held by the Speaker over the conduct of debate, or the consideration of amendments, are set out in the House of Commons Standing Orders.

What we’ve perhaps seen during the Brexit process is the greater frequency of their use. This may be because of heightened tensions in the chamber over recent months, the number of ministerial statements and motions being debated by MPs, or the desire of the current Speaker to empower backbench MPs.

This is something Bercow has spoken of on many occasions, and underpins his use of the urgent question procedure. To return to Andrea Leadsom’s comments about the impartiality of the Speaker – his remarks about the discourtesy shown by the government were more (as he went on to explain) to do with the fact that over 150 MPs had participated in the debate so far and would now not get to cast a vote on it.

It wasn’t just a Speaker criticising the government, it was a Speaker standing up for the rights of Parliament.

By Dr Louise Thompson, senior lecturer in Politics at The University of Manchester.