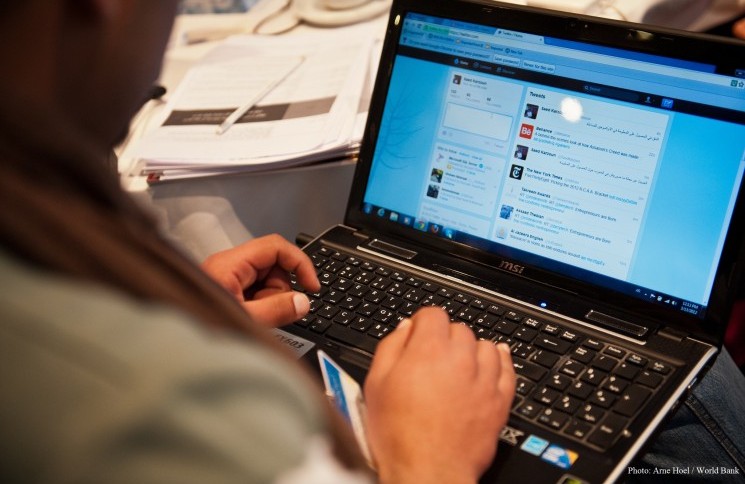 On 6 June, the official voter registration website received more than 525,000 applications from people wishing to register to vote in the upcoming EU referendum. Evidently this was too much for the website to handle. Emergency legislation had to be adopted to extend the registration period by 48 hours after a massive wave (50,000) of would-be voters tried to apply shortly before the deadline. More than 400,000 people benefited from this extra time to register, although only a smaller fraction will actually be registered and vote.

A large share of the last-minute applicants were aged between 18 and 34 years old. Some of the individuals in this age range will be voting for the first time in the referendum. Others, however, may have taken part in previous elections, but nevertheless understand that what is at stake now might somehow have greater impact on their future. While application figures have to be taken with a pinch of salt, this new group of voters may affect the result of the referendum, shaping the relationship between the UK and the EU in the coming decades.

Figure 1. Daily number of applications made for voter registration by age group 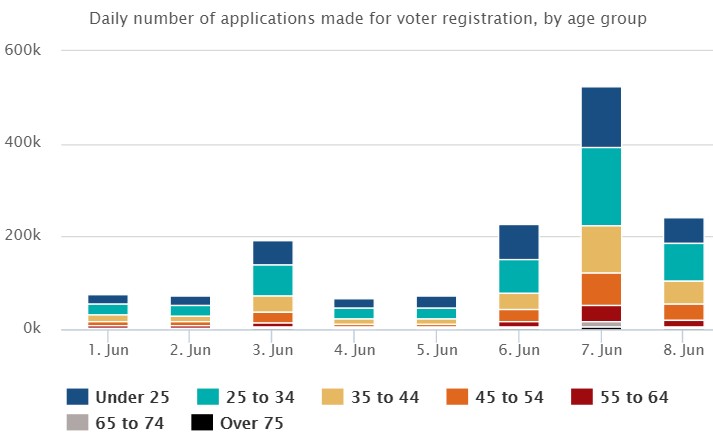 Source: Gov.uk, published by The Telegraph

In comparison to older age groups, a higher percentage of these potential new voters grew up in multi-ethnic communities and are less concerned about immigration or the status of pensions – topics that have dominated the debate so far. Even if political leanings and regional differences are taken into account, only a minority of young voters consider the EU to be a major issue for Britain today.

At the same time, they are likely to believe the economic arguments put forward by the ‘Remain’ camp: almost half of them believe that Britain’s economic performance would be worse in the case of a Brexit. Younger age groups also tend to be perceived as the section of society which benefits more directly from globalisation – they have developed the language and digital skills necessary to interact with their peers from different parts of the world, while senior citizens feel left behind by their government in a country that is more diverse and more dynamic than the one where they grew up. Figure 2 gives a snapshot of how attitudes toward the EU change depending on age and other demographic factors.

Figure 2. Concern about the EU/Europe 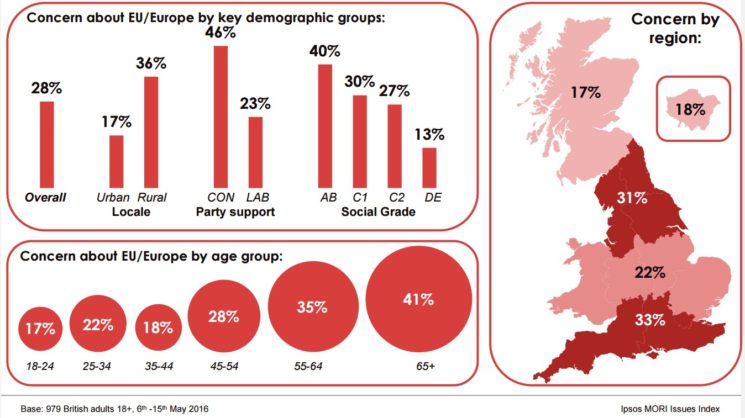 Although young people are more likely to support ‘opening doors’ to the world rather than building fences, they also tend to have weak party affiliations, lower levels of trust in politicians and mainstream media, and less intense political engagement than similar age groups in other European countries. They also have a poorer understanding of what the EU is and how it works, despite having more access to information than previous generations due to the growth of online sources.

Younger generations also rely massively on the internet – not only traditional websites but also news feeds, user-generated content such as blogs, and video-sharing platforms – to get information about what is going on in the world and to express themselves. A great majority (96%) do so through a mobile device. For them, effective communication needs to be fast, simple, straightforward and, whenever possible, fun.

Political parties, as well as the EU’s institutions, often manage these channels in a decidedly clumsy way. Unable to communicate effectively with these audiences, they rely chiefly on traditional methods (TV, press, radio and their corresponding websites) as well as on traditional audiences, hoping that eventually young people will reach out for information through ‘normal’ means. Social movements, on the other hand, use social media more effectively and intensively, but do not necessarily aim at connecting young audiences with traditional ways of political participation. In other words, we have a number of potential voters who tend to reluctantly support the EU, but who are poorly informed and ambivalent about voting.

Could ‘Remain’ supporters be more relaxed about the referendum?

The extension of the registration deadline could provide the ‘Remain’ camp with 30,000 extra votes, but these figures need to be put in context. As stressed by Professors Anand Menon during the #EUgetfacts flagship conference on 10 June, and Philip Cowley from Queen Mary University of London in 2015, an application to register is not the same as registration.

Some of the individuals who have added their details through the website are not actually eligible to vote and their registrations will not be processed. Others may have already registered last year, or may have been registered before the 2013 Electoral Registration and Administration Act by the head of their household, or by their universities, and are not aware of this. It is worth keeping in mind that around 50,000 applications were made by people over 55, who are more likely to vote to leave than younger citizens.

Finally, young people who have successfully registered are still unsure about how to vote. These votes will go to the camp that manages to speak to them through channels with which they are more familiar with. This requires a serious rethink in the way parties, politicians, and EU officials talk about their views and projects: communication which is less artificial, more spontaneous, and more credible.

Dr Tatiana Coutto is based in the Department of Economics at the University of Warwick.