Is the UK marginalised in the EU?

One key issue in the debate about whether the UK should remain in the European Union is how far the UK is “marginalised” in EU decision-making.[1]  As Lord Lawson put it in a piece in The Times in May 2013:

“Not only do our interests increasingly differ from those of the eurozone members but, while never ‘at the heart of Europe’ … we are now becoming increasingly marginalised as we are doomed to being consistently outvoted by the eurozone bloc.”

The question of how far the UK is marginalised is the focus of my senior fellowship with the ESRC’s ‘UK in a Changing Europe’ programme.

My aim is to ‘look at the facts’: to examine existing datasets that I and others have collected and to examine the evidence in an impartial way.

The Decision-Making in the European Union (DEU) dataset

I start by looking at a well-known dataset in EU research: the Decision-Making in the European Union (DEU) dataset put together by Robert Thomson, at the University of Strathclyde, and his collaborators.[2]  The data are available on Robert’s website here.

The dataset contains information on 331 controversial issues on 125 pieces of EU legislation between 1996 and 2008 (i.e. several issues on each piece of legislation). For each of these issues, Robert and his colleagues identified the preferred policy position of each EU government, the EU Commission, and the European Parliament. For each of these issues, the team identified a policy scale from 0 to 100, with the most extreme actors located at 0 and 100 and the other actors located at different points between the extremes.

One issue, for example, concerned a controversy on a piece of legislation being negotiated in 2005 on the reduction of subsidies for sugar production. The positions ranged from stopping all subsidies (position 0 supported by Denmark and Sweden) to keeping current levels (position 100 supported by Poland).

The UK’s position was closer to the Danish and Swedish position, as was the outcome, which meant a substantial reduction in subsidy levels. The team also identified the location of the final policy outcome, the existing policy (the status quo), as well as the importance (salience) each government attached to each issue. The information was gathered through in-depth interviews with over 350 key decision-makers from almost every member state.

This rich dataset has been used extensively by Thomson and his collaborators, as well as by other scholars, to investigate many aspects of EU decision-making: such as what has been the impact of enlargement on EU decision-making (not much), whether EU policy outcomes tend to be centrist compromises or radical changes to existing policies (they tend to be centrist); and whether the EU Commission and the European Parliament are as “powerful” as some people have claimed (the evidence suggests that the governments are more powerful than these institutions).[3]

These data have not though been used to look at the marginalisation of the UK on these pieces of legislation. So, that is what I have done here.

A government could be “lucky” on a particular issue, by simply having a preferred policy position that is the same as that of many other governments, and hence obtain the outcome it wants without having to take any action itself. Nevertheless, by aggregating across a large number of issues on a large number of pieces of legislation, the effect of such luck should wash out. So, the question, then, is how far is the UK government from policy outcomes in the EU relative to other governments and the EU Commission and European Parliament?

UK Government and other EU actors’ distances from policy outcomes

The simplest way to answer this question is to look at the average “distance” between a government’s policy position (on the 0-100 policy scale) and the final policy outcome in each of the 331 issues in the dataset. The results of this analysis are shown in Figure 1 (on the left), where the actors are sorted from the closest to the final policy outcome (at the top of the figure) and the furthest away (at the bottom).

As the results show, at least for these 125 pieces of legislation, the UK government has been far from “marginalised”. In fact, out of 29 EU actors (27 member states plus the Commission and the Parliament), the UK was on average the fourth closest actor to final policy outcomes. Furthermore, the UK has tended to be much closer to policy outcomes than any other large EU member state. Also, perhaps surprisingly for some British commentators, France and the EU Commission are towards the bottom of the figure – having to accept policy outcomes that are considerably different from their policy preferences. 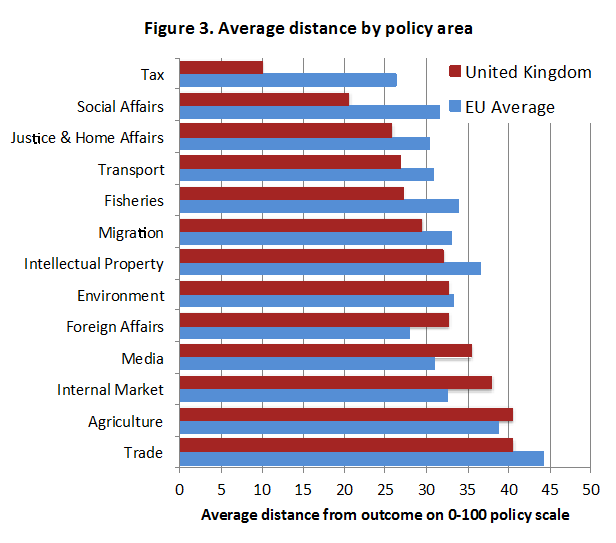 But, perhaps the UK government was only successful on issues it did not particularly care about? To investigate this, Figure 2 (on the right) shows the average distances from policy outcomes on only those issues for which each actor felt very strongly – technically, here I only look at issues for which an actor had a “salience” score of greater than 75 (out of 100).

The results are even more positive from a UK perspective: in that the UK government found itself even closer to the average policy outcome on issues it really cared about than on all issues. Again, the UK was one of the top performers by this measure (second only to Greece this time), and was considerably closer to policy outcomes than the EU average, and than any other large member state.

At least as important as the ranking of member states in terms of average distance to the outcomes is the fact that there are modest differences between the highest and the lowest ranked countries; almost all are between 30 and 40 points on average from the outcomes on the 0-100 policy scales. Moreover, there are no statistically significant differences among member states in terms of their average distances to decision outcomes. This means there are no clearly identifiable winners and losers among the member states across a broad range of controversial issues. The absence of clear winners and losers is a key feature of the EU’s political system, one that makes it complex, but also partly explains its survival.

Although distances between member states’ policy positions and outcomes are good indications of marginalisation, or the lack thereof, “political power” is a quite different thing. The fact that Greece is at the top of one of the rankings indicates that Greece, like the UK, was not marginalised in the EU in the time period considered. But it certainly does not suggest that Greece is the most powerful country in the EU. The success of Greece has more to do with the fact that the Greece, being a small country with a relatively narrow range of interests, could be highly selective on whether it took a position and how it positioned itself.

Political power is commonly thought to include the ability of a government to get what it wants in the face of resistance from others. This ability is based on a range of hard and soft resources, including economic power and diplomatic skills. The DEU project also surveyed decision-makers across the EU to elicit their opinions on the relative power of member states. The UK was consistently ranked on a par with France and Germany. Italy, by contrast, which has the same voting weight in the Council as these three countries, was ranked lower in terms of its political power.

However, when we breakdown the pieces of legislation by policy area, we find considerable variation and some troubling results from a UK government perspective, as Figure 3 shows. Policy outcomes are close to UK policy positions on tax issues (such as rules on VAT), social affairs (such as on the Working Time Directive), justice and home affairs (such as data protection), and transport (such as Air Transport liberalisation), fisheries (such as fish quotas), and migration (such as rules on the free movement of people in the EU and common EU asylum policies).

Nevertheless, the UK government tends to be quite some distance from EU policy outcomes on internal market issues (which here includes financial services regulation), agriculture (such as the application of the Common Agricultural Policy), trade (such trade agreements with countries outside the EU).

A more detailed analysis reveals that there are many specific issues on which the UK did relatively well in terms of being close to the outcomes, as well as many on which it did relatively poorly in these terms.

Likewise, a regulation from 2000 began the process of liberalising the market for bananas, with significant implications for developing countries, despite objections from the UK.

In the area of justice and home affairs, we find an example of a success for the UK in the data retention directive of 2005, which obliges mobile phone operators to retain data on communications for use in fighting crime and terrorism.  That directive is broadly in line with the positions advocated by the UK government during the negotiations.

In Sum: Not marginalised on most issues (at least according to these data)

It is worth pointing out, though, that there are some important caveats to these findings. The DEU dataset covers policies that are subject to decision–making under the main legislative procedures. It does not include, for instance, decision-making on the EU budget or international treaties. The team included all controversial pieces of legislation in certain years between 1996 and 2008. Obviously a lot has happened in the EU since 2008. Hence, to address the issue of whether the UK has become more marginalised in the EU since the Eurozone crises in 2009/2010 and the EU’s response to the crisis we will need to consider other types of evidence and data, which I will be doing in future posts.

[1] I would like to thank Robert Thomson for sharing his data and for comments on an earlier version of this blog.

By The UK in a Changing Europe senior fellow Professor Simon Hix.

The second piece in this series is Does the UK win or lose in the Council of Ministers?