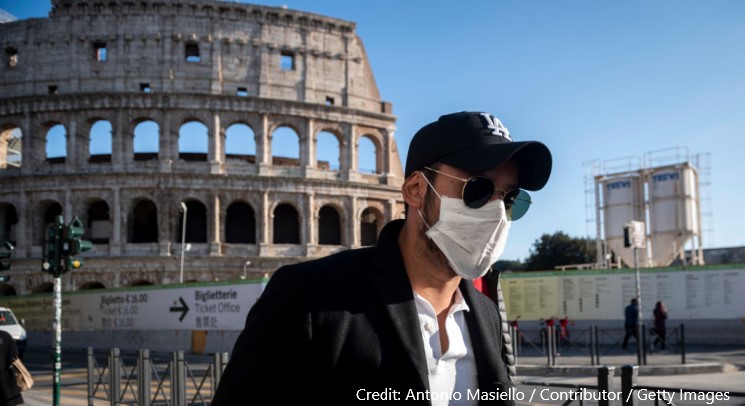 As an indiscriminate, sudden, and exogenous crisis, the Covid-19 pandemic has compelled media and political actors to either quickly adapt their narratives to a new scenario, or find fresh reasons to reiterate the old tropes they already owned. In Italy, all major political parties have chosen the second option.

Following a brief political truce not dissimilar to that seen elsewhere, harsh political competition has made a comeback in the country and parties have embraced the parts the script had assigned to them before this crisis struck.

These vary according to whether parties support the government or not, and how they need to position themselves vis à vis their political friends and foes.

The truce ended as the first details were made public of the agreement EU governments are reaching on how to respond to the crisis caused by the pandemic.

Most striking has been the competition between the populist radical right League (now in opposition after being ejected from the government in the summer), and the populist Five Star Movement, a party that is very difficult to place on the left-right scale due to its eclectic ideology.

Five Star is now the dominant party within the executive, and governs alongside the centre-left, and fervently pro-EU, Democratic Party.

What the League and Five Star have always had in common is that they are both EU-critical in theory (albeit EU-compliant in practice).

Given the difficulty of finding a solution to the present crisis acceptable to both northern and southern European governments, and with surveys suggesting roughly the same number of Italians now leaning towards Leave and Remain, the present crisis clearly provides a golden opportunity to attack the EU.

However, the two parties are now in a very different place when it comes to exploiting the situation.

Until recently, Matteo Salvini’s League has found it difficult to put forward a coherent narrative about how to deal with the pandemic.

For some weeks, the seriousness of the crisis and the high levels of public approval enjoyed by PM Giuseppe Conte meant that, very unusually, Salvini was struggling to get attention in the national media.

The fact Lombardy (a region run by the League) had been overwhelmed by the spread of the virus also militated against him raising his voice.

As the virus struck, Salvini switched from calls to tighten the borders to a premature request that normality should be restored and economic activities reopened while the virus was still spreading at speed. This was followed by calls for the country’s lockdown to be made stricter less than two weeks later.

But the League was rescued by the bickering between EU finance ministers and governments on how to deal with the crisis.

As soon as the idea was mooted that the European Stability Mechanism (ESM) – an institution long opposed by the party – could be used by countries badly hit by the virus to borrow funds with which to cover medical spending, Salvini ended the truce.

Reviving memories of Greece’s subjugation to its creditors from 2010 onwards, the League’s leader argued that “the ESM without conditionality does not exist”, and that accepting money via this route would inevitably lead to establishing “a dictatorship in the name of the virus”.

Hence the party has called for the Italian Treasury to issue bonds to finance the recovery instead, arguing these should be fully backed by the European Central Bank.

Although the League voted in favour of the Lisbon Treaty when its own government brought it to Parliament in 2008, and was ultimately eager to reach an agreement with the European Commission on Italy’s budget when it returned to government in 2018, it has nevertheless embraced EU-criticism and harsh anti-EU tones in every recent electoral campaign.

This situation presents the Five Star Movement, however, with an insoluble dilemma. The script dictates that it should act as an anti-establishment party. But it lacks the skills and political personnel to do this well, especially when dominating the government.

Having criticised the ESM just as often as the League before gaining power for the first time in 2018, Five Star has voted in the EU Parliament against activating this fund. Yet it is the largest partner in a coalition government that may well draw resources from it in a few weeks’ time.

If a credible argument can be made that the money is really being made available ‘without conditions’, as EU finance ministers have said, the Democratic Party will push for its utilisation.

Doing so is likely to receive backing from Berlusconi’s Forza Italia, a party keen to be seen as ‘responsible’ right now in order to differentiate itself from its more radical allies on the right. This would force Five Star to attack Conte, the man it picked as PM back in 2018, while some from the opposition cheer him on.

‘Performing crisis’ may well be one of the core features of populism.

When populists are in government, something that is becoming increasingly common in recent years, they can benefit from pitting ‘the people’ against various enemies, by advocating strong leadership to bring crises ‘under control’.

The dilemma for Five Star is that this obviously cannot be done at the same time as distancing itself from the decisions of the Prime Minister.

So, as the League keeps hammering Five Star with accusations of ‘betrayal’ of the national interest, expect the latter to try, but ultimately fail, to keep one foot in and one foot out of government in weeks to come.

By Dr Daniele Albertazzi, reader in Politics and Dr Mattia Zulianello, research fellow, both at the Department of Politics and International Studies, University of Birmingham.