Jeremy Corbyn is in unfathomable trouble over Brexit 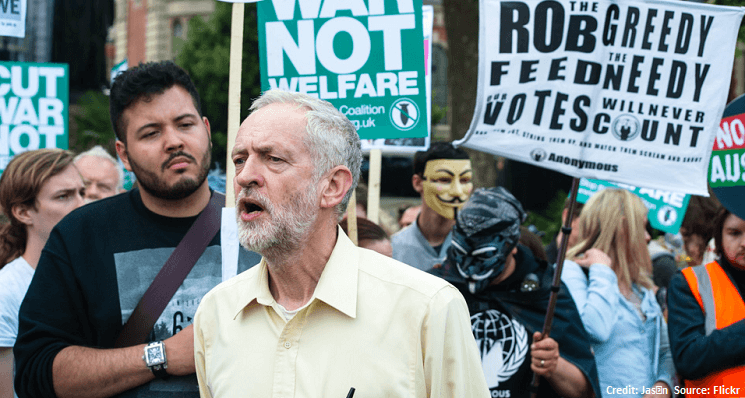 Jeremy Corbyn is in unfathomable trouble over Brexit. From once being on the verge of power, Corbyn’s handling of the issue looks like ending his hopes of ever becoming Prime Minister. How has it come to this? Perhaps the Labour leader’s own history is catching up with him?

The Labour party which Corbyn joined was often at loggerheads over Britain’s relationship with the rest of Europe. In 1975 the country held its first ever referendum on whether to remain in the European Economic Community (as was) because Labour could not decide.

The Remain leadership was opposed by a Leave membership, including Corbyn, already a councillor. The people’s overwhelming vote to Remain did not however end the dispute in Labour’s ranks: insurgent left activists among whom numbered Corbyn continued to see the EEC as a capitalist club and a barrier to socialism.

Thanks to the left, Labour’s 1983 general election manifesto contained the pledge to leave the EEC. Corbyn was elected an MP in 1983 but the party’s crushing defeat marginalised Benn and his allies. And, during the rest of the 1980s the party began to see EEC membership in a positive light, if only to contain Thatcherism.

For if the Conservatives undermined workers’ rights Brussels often sought to regulate working conditions. If some members had doubts about Tony Blair, few disagreed with his ambition in 1997 to put Britain at the heart of Europe.

Corbyn remained immune to this Europhilia, being one of a handful of MPs determined to keep the Bennite torch burning. He remained a constant critic of the EEC, opposing its transformation into the European Union in 1993. His hostility only increased when the EU imposed severe conditions on the Greeks following the banking crisis.

Unexpectedly elected leader in 2015 Corbyn’s victory reflected members’ frustration with moderation in the face of austerity: he promised to reflect their desire for socialism by creating a ‘member-led party’. If in that campaign refusing to say whether he would support Remain in the upcoming referendum, it did not concern those who made him leader, despite their keen desire to remain in the EU.

Corbyn ostensibly campaigned for Remain, in line with established Labour policy, but some believed his contribution was half-hearted. That hours after the decision to Leave was announced he called for the immediate invocation of Article 50 further inflamed matters. Such was their anger Labour MPs tried to unseat him. But Corbyn was re-elected by members who while supporting Remain believed ‘centrist’ MPs launched their coup not because of his attitude to Brexit but because he was a socialist.

Corbyn’s position was secured when Labour did unexpectedly well in the 2017 general election. By then he had committed the party to ‘respect the referendum’ and seek as soft a Brexit as possible, albeit one ending free movement and leaving the Single Market. This position was seemingly pragmatic – a significant number of Labour MPs represented Leave-voting constituencies – but also suited Corbyn’s preferences.

Despite now being a Leave party, faced with a Conservative party apparently intent on as hard a Brexit as possible Corbyn won over many younger Remain voters, because he promised to end austerity and they believed leaving the EU was inevitable. It was by maintaining this coalition and winning over more Leave voters Corbyn hoped to win office in the near future.

Theresa May’s failure to win backing for her Brexit deal has, however, upset Corbyn’s approach. For it opened up the possibility that Britain might not leave the EU while polarising opinion between Leave and Remain supporters. It has also exposed Corbyn’s differences with Remainers in his party and with the voters he attracted to the party in 2017, seeing Labour crash to 14 per cent in elections for the European Parliament and 41 per cent of members vote for another party.

Corbyn’s claim to want to unite Leave and Remain supporters and focus on more important issues, notably austerity and the inequalities it has engendered is now in tatters. He is faced with the need for clarity or see his party squeezed by the Brexit Party and those parties which enthusiastically support Remain.

The overwhelming majority of Labour voters and members want the UK to Remain in the EU and at the very least seek a referendum on any deal agreed by the Commons. In the European Parliament elections the party mostly lost support to Remain parties. There is, bluntly, no other electorally pragmatic course for Labour to take but to embrace Remain.

In the days following the announcement of Labour’s European Parliament election results, Corbyn remained reluctant to take that course. He appears to have grudgingly conceded that any Brexit deal should be put to a referendum, but expressed himself such opaque terms it is uncertain if that vote would have Remain as an option. His pained expression during interviews in which this apparent concession was announced is easy to interpret.

For Corbyn, history has come full circle: he is now part of a Leave Labour leadership faced with a Remain membership. If the Labour leader hopes to obfuscate his way out of this fix, unlike the wily Harold Wilson – whose pragmatism was infamous – Corbyn lacks the ability or desire to abandon one of his cherished ideological lodestars.

What was once seen by members as one of Corbyn’s most cherished characteristics – his stubborn adherence to principle – has now become a fatal weakness.

By Steven Fielding, Professor of Political History at the University of Nottingham.