Jeremy Corbyn’s referendums – which will he choose? 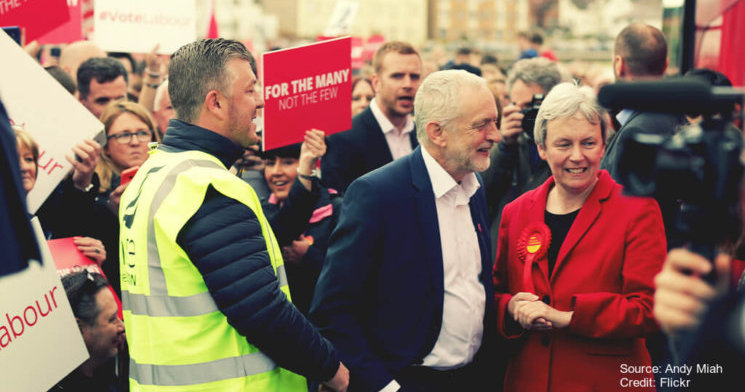 With an imminent general election, Labour’s Brexit policy for the coming years is about to come under the spotlight like never before.

It’s decision time about what a referendum is for: to provide democratic legitimation for a Brexit deal (having seen just how many versions of Brexit people think the last referendum justified); or to provide an opportunity to decide again on Britain leaving the European Union.

It has been possible, from both points of view, to coalesce and be in favour of ‘a referendum’, undefined, to ‘sort it out’. Until now.

Labour’s spokespeople, as with Shadow Cabinet members Richard Burgon and Emily Thornberry recently, experience uncomfortable interviews when questions move beyond referendums on leaving without a deal, or on a Conservative withdrawal agreement.

Referendum policy right now is clear for Labour: a Conservative deal, or no deal, should be put to a referendum and the party would campaign to reject either option and to remain in the EU. Yet if an election resulted in a Labour majority, or Labour-led coalition, what role does a referendum then play?

Labour’s 2017 manifesto sought ‘to unite the country around a Brexit deal that works for every community in Britain’.

This position has evolved since 2017. For example, Labour has voted in the House of Commons for the ‘Norway’ option of staying in the single market.

The continuity option for Labour in the forthcoming election would be to offer the latest iteration of the ‘Labour deal’. Here the referendum would provide the legitimation, potentially coming four years after the first referendum, and a choice for voters as to whether to accept the negotiated exit or to remain in the EU.

Putting aside the complexities of which options could be included in a referendum, the policy question remains as to what Labour’s Brexit position would be: should Britain leave or remain?

Recommending a vote for a negotiated exit, under this scenario, risks dismaying Labour’s members. As Tim Bale, Paul Webb and Monica Poletti show in their new book, Footsoldiers, Labour’s members overwhelmingly want to remain in the European Union.

When surveyed during the period of peak activity for Theresa May’s negotiations, half of Labour’s members said they’d have felt at least ‘relieved’ if the UK ended up leaving the EU, but remaining in the single market and customs union. Yet 82% wanted a referendum and a vote for Remain.

How members would feel with their government advocating for even the ‘softest’ of Brexits, rather than a Tory government, will be a significant factor for Corbyn to consider.

Electorally, the Liberal Democrats would leap upon this as Labour opening the door to Brexit, however reasonable that position was previously considered when faced with Theresa May’s ‘red lines’.

The alternatives would be remaining formally neutral, allowing Labour’s politicians and members to advocate for whatever they prefer, or wholeheartedly embracing Remain against the deal Labour had negotiated. Both give rise to questions.

Could a Labour prime minister remain neutral on what his own members consider to be not only the most important political issue, but also a matter connected to Labour’s internationalist identity? And on rejecting a new deal, would it be worth the time and effort to negotiate a deal which, from the very beginning, a government didn’t believe would be in the national interest?

Moving away from ‘Labour deal’ territory, there is a referendum where a government recommends taking a new decision, Leave or Remain, on the basis of the diplomatic and economic reality of negotiating Brexit.

This would be clearer, at least in the first instance, for Labour’s members and those voters who favour remaining in the EU. But again, it is not without complexity.

Such a policy would trigger strong opposition from some Labour MPs, who during the passage of the Benn bill amended the legislation – albeit in a peculiar way enabled by government whips – to push for parliamentary consideration of a deal, rather than debate a referendum.

Opposition to a referendum is based on concerns about the politics of seeking to overturn the 2016 result, and the electoral impact for Labour. And of course, referendum results sometimes surprise sitting governments and cause political chaos.

What if, in a future referendum, voters elected to leave? Could Labour pass a withdrawal agreement through the House of Commons? And if so, should that deal be put to a referendum too?

Those reading this hoping for a clear policy to emerge that seems very close to one of the above options could be disappointed. There is, as ever, room for vaguer formulations and for people to find what they want to find.

Labour could commit to a referendum which might be on a newly negotiated deal, depending on whether a far better agreement could be achieved quickly, leaving open the option for a different kind of referendum if it couldn’t.

And while the views of party members are important in Labour’s politics –Jeremy Corbyn campaigned on membership policy power in two Labour leadership contests – so too are the traditions of loyalty and holding together in the face of the Conservative opposition.

Corbyn’s Brexit strategy so far has been cautious. There are signs he and his team are being less so.

In seeking a higher profile in the efforts to block a no deal Brexit over the summer, the Labour leadership has shown a greater willingness than earlier this year to be actively promoting the motions and bills that have emerged from the backbenches.

Election timing and the next iteration of Labour’s Brexit policy will be the biggest decisions of his leadership to date.