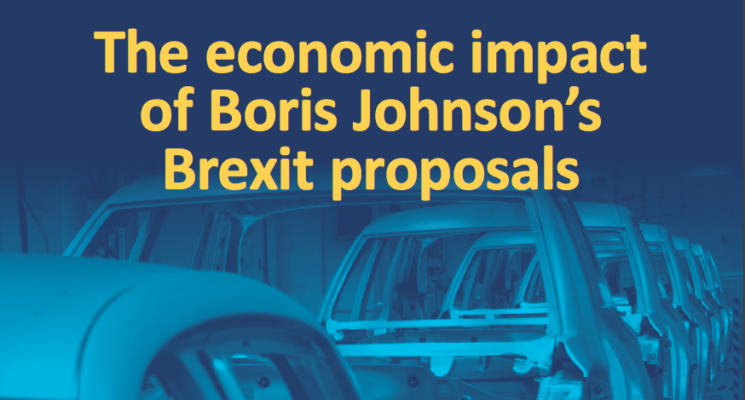 The reason for the significant economic difference between May’s deal and Johnson’s proposals is because Great Britain will have no customs union with the EU, no level playing field arrangements and a limited (or quite possibly no) free trade agreement.

The Brexit proposal by Boris Johnson could reduce UK GDP per capita ten years after Brexit by between 2.3% and 7%, compared to remaining in the EU.

The ranges reflect uncertainty regarding migration policy and the productivity impact.

The economic modelling in the report covers trade and migration. For trade, researchers at LSE’s Centre for Economic Performance used a state-of-the-art model of global trade.

The prime minister’s proposal means that the UK leaves the EU’s customs union and single market and so regulatory barriers to both goods and services trade will increase as a result.

Under a no deal scenario, such barriers would be considerably higher.

Mrs May and Mr Johnson said freedom of movement will end once the UK leaves the EU.

Early indications suggest the Johnson administration may take a more liberal approach to immigration than the May one.

The UK in a Changing Europe modelled a restrictive scenario and a more liberal one. 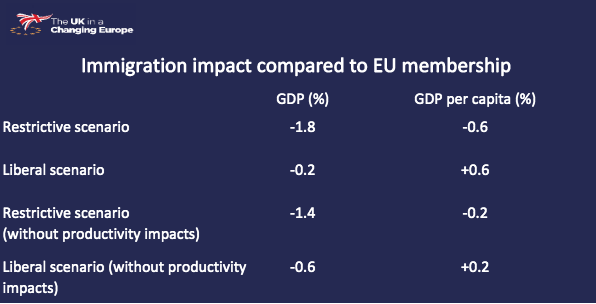 Such a large economic impact would also have major implications for the public finances. These would far outweigh any gains resulting from reduced EU contributions. 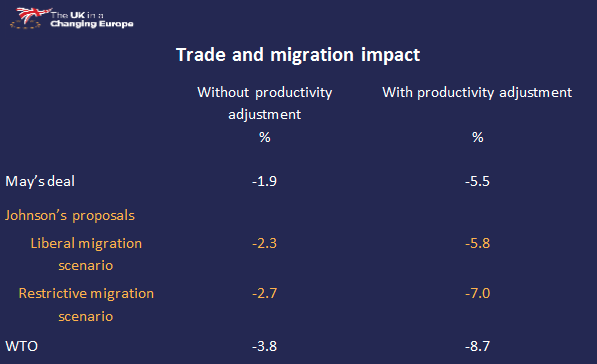 Professor Anand Menon, director of The UK in a Changing Europe, said: “In all the sound and fury over the politics of Brexit, the economic implications have been somewhat lost from sight. Obviously, this kind of economic modelling needs to be treated with appropriate caution. However, our estimates provide a clear indication of the broad scale of the impact of Boris Johnson’s proposal, which can be compared to May’s deal, as well as a no deal scenario.”

Professor Jonathan Portes, senior fellow at The UK in a Changing Europe, said: “Our modeling shows that the much more distant economic relationship with the EU envisaged by Boris Johnson will mean that the economic impacts of Brexit on trade and hence growth will be considerably more severe. The hit to the UK public finances could be up to about £49 billion a year. However, these could in part be mitigated by a more liberal immigration policy.”

These results are subject to a high degree of uncertainty, relating both to the inherent difficulties in economic modelling, and the fact Johnson’s proposals have not been approved by the EU yet.

The report makes a number of assumptions, some of them subjective, which are set out clearly and transparently.

It also analyses the impact of changes in trade and migration both holding productivity constant and allowing for productivity to adjust following Brexit.

The conclusions of the report are consistent with economic theory and the empirical literature.

The report does not model the short-term disruption resulting from no deal, which was the subject of an earlier UK in a Changing Europe report, No deal Brexit: issues, impacts and implications.

The UK in a Changing Europe, and the authors of this report, do not take any position of which of the four scenarios are preferable, recognising that there are many other considerations than simply economic ones.

Nevertheless, it is important that Parliament, and the country as a whole, take decisions on the basis of the best available evidence.

The 16-page report was written by Hanwei Huang, Jonathan Portes and Thomas Sampson, with contributions from Matt Bevington and Jill Rutter. You can download the full report here.