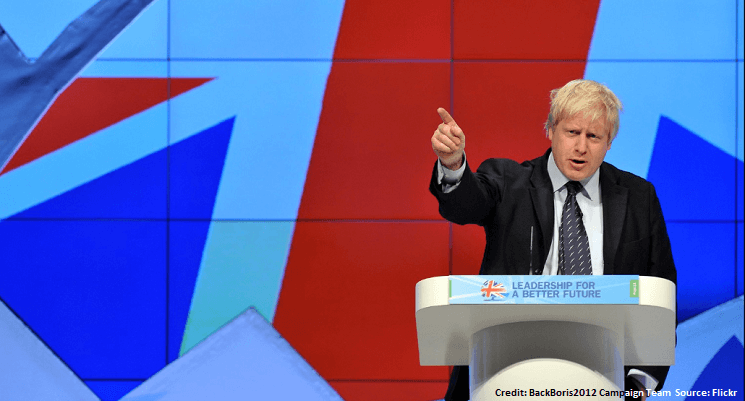 The Northern Ireland backstop is dead. Well most of it. In its place we have a proposal which consists of something old, something new, and something blue.

There are four key elements to the government’s new proposals

Yesterday Boris Johnson unveiled his plan to “solve” the issue of how the UK can leave the EU’s customs union and single market while avoiding a hard border in the island of Ireland.

We have seen a letter and an explanatory notes – but the legal text is for negotiators only.

First up, he is offering the possibility of “dynamic alignment” with EU goods regulations in Northern Ireland.

This covers the same areas of regulation as set out in the old Northern Ireland protocol negotiated by Theresa May. Those rules would be enforced by the European Court of Justice.

However, the EU cannot bank that offer.

The government has repeatedly denounced the backstop as “undemocratic”. So the Prime Minister is proposing to democratise the backstop.

The Northern Ireland executive and Assembly will have to agree that these arrangements remain in the place at the end of the transition – and then have to renew that agreement every four years. This is the so-called “Stormont lock”.

And the prime minister asks the EU to agree that if Northern Ireland decides against staying aligned with the EU, the EU will not introduce any checks at the border.

Third, he proposes to take NI out of the EU’s customs territory along with the rest of the UK at the end of the transition.

The EU originally proposed that Northern Ireland would stay in the EU’s customs territory when then rest of GB left.

Theresa May tried to pacify unionist opinion by negotiating for the UK to stay in a customs territory with the EU – regarded by the EU as a major concession.

That was a major reason why her backstop was regarded as trapping the UK permanently in a customs union – and why it was rejected by some many Brexiter MPs.

But the government admits that means customs checks – even if there is agreement on tariff and quota free trade in the new “best in class” free trade agreement.

The UK proposes those clearances are done away from the border, with no new physical infrastructure, but someone, somewhere will need to check.

And because the UK is leaving the customs territory, the government notes that all the so-called “level playing field” provisions – on state aids, competition, environmental and social protection the EU insisted on as a price for the UK staying in a customs territory are redundant and should not be in a new agreement.

Normally that means that VAT has to be collected at a border. The UK is suggesting that this can be collected away from the border, though details are vague.

The offer reflects the very different endpoint for the Johnson government

The most important line explaining the new approach is in Johnson’s letter to European Commission president Jean-Claude Juncker.

He points out that Theresa May saw the backstop as a bridge to the new relationship.

But he puts the EU on notice, that for this government the backstop would be “a bridge to nowhere” as “that proposed relationship is not the goal of the current UK government”.

They are looking for a loose free trade agreement – not the sort of close relationship to the customs union and the single market (in goods at least) that Theresa May proposed at Chequers.

The Commons arithmetic is tight – but might be deliverable

The EU – burnt by repeated failed assurances from Theresa May that her deal would pass – will only make its final moves for a deal that will command a parliamentary majority.

Strip away the take it or leave it rhetoric, Johnson does seem to be offering something to the EU that could command support in the Commons.

He would stitch back the coalition that backed the Brady amendment for “alternative arrangements” in January: the DUP, the ERG (who are making positive sounds) and the anti-no deal ex-Conservatives (minus those who want a second referendum).

The big challenge will be getting any Labour votes if he needs them to get over the line. Certainly, Kate Hoey seemed very comfortable at the Conservative party conference.

These number have evolved – some 17 Labour MPs backed two amendments in early September calling for a vote on May’s withdrawal agreement.

The position of these MPs appears to be evolving too, towards backing any deal at all struck between the UK and the EU.

However, some who might have been tempted to vote for Mrs May’s deal will see the Johnson equivalent as leading to a far looser, and hence less desirable, relationship with the EU.

Others may be more nervous about handing Boris Johnson a negotiating triumph – with an election imminent, and after his antagonistic approach in the Commons.

And others will see the Benn Act as removing the threat of no deal this side of an election – and therefore feel able (for now) to duck the choice for now.

And that majority needs to hold not just for one meaningful vote, but for the passage of the withdrawal agreement bill.

That contains a lot of commitments (on money, aligning with EU rules during the transition with no say and continuing ECJ jurisdiction) which many MPs won’t like.

The agreement is worth nothing until that bill passes intact.

This offer falls well short of the EU’s objectives

But this deal only gets to the Commons if the EU says yes. There are some attractions for the EU.

It guarantees the other elements of the Withdrawal Agreement, on the financial settlement and citizens’ rights (at least until MPs start amending the withdrawal agreement bill).

It brings phase one of Brexit to an end and allows the conversation to move to phase two.

It allows a transition. It takes the immediate risk of no deal off the table and also removes the prospect of a disgruntled UK government, forced to stay in the EU against its will, hanging on in the EU’s decision-making institutions.

But it falls massively short of the EU’s objectives for the backstop.

The UK has stepped miles back from the commitments it signed up to in the December 2017 joint report to avoid not just physical infrastructure at the border but “associated checks and controls”.

There would be a customs border for sure. And there might well be a regulatory border as well.

The UK’s proposal hands that decision to two institutions that have not functioned for nearly 1,000 days: the Northern Ireland executive and Assembly.

It’s unclear what happens if those institutions are still inactive when the decision point – some time next year – approaches.

Moreover, provisions in the Good Friday Agreement designed to protect the rights of minorities, effectively hand either community a veto over changes.

That means that even if the executive and a majority in the Assembly voted to stay aligned with the EU rather than a divergent GB, the unionists could stop that happening.

It may be that pressure from the business and farming community in NI stops that veto – but the issue would come up every four years – so its hardly the sort of watertight guarantee the EU wanted.

Weighing too on the mind of the EU will be the impact on UK politics.

Agreeing this sort of deal would give Johnson a platform for an election of “having got Brexit done” (and a big personal boost).

It would take the option of a referendum with Remain on the ballot off the table, which a few may still hanker after.

The proposal may be designed to do little more than allow the government to blame the EU for failure to deliver a deal.

But the EU is now on notice of the type of future relationship a Johnson government wants.

If a Johnson government is returned after the EU rejects these proposals it may find that the current offer of “no deal” with money and citizens’ rights guarantees turns into a straight no deal.