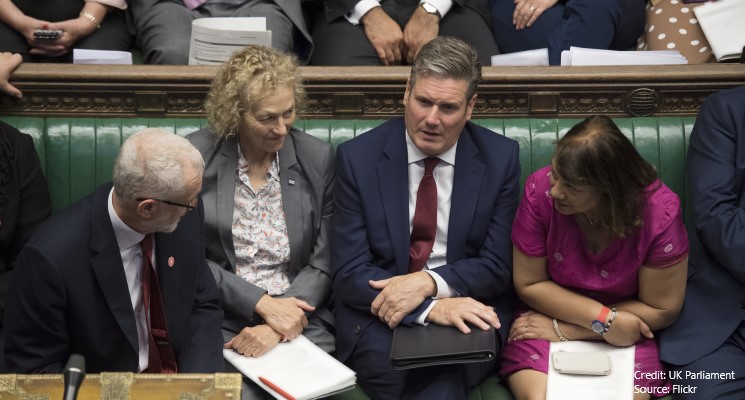 If – and, in spite of our ESRC-funded Party Members Project survey last week suggesting he was some way ahead of his rivals, it remains a big if – Keir Starmer succeeds Jeremy Corbyn as Labour Party leader, then one could well trace his success back to 25 September 2018.

That was the day when, at the Party’s Annual Conference in Liverpool, Starmer, speaking in his capacity as Labour’s Shadow Brexit Policy, earned a standing ovation from members when, in a departure from his agreed text, he not only declared that ‘We must keep all options on the table’ but added ‘And no one is ruling out the option to Remain.’

The leadership was, to put it mildly, none too pleased.

Corbyn and co., having bowed to internal pressure to concede the possibility of a second referendum were still at that stage suggesting it could only be on the terms of any deal rather than offering the public a chance to reverse the result of the vote in 2016.

The vast majority of delegates, however, wanted more. True, many of them had spent a fair bit of their time on the conference floor waving Palestinian rather than EU flags.

But like the party membership more generally, they were overwhelmingly pro-European, pro-People’s Vote, and pro-Remain.

In short, and to borrow from a phrase that emblazoned many a free t-shirt given away in Liverpool that year, they still loved Corbyn but they really hated Brexit.

Starmer, by staying in the Shadow Cabinet rather than flouncing out of it, by patiently working from the inside to pull Labour towards a stance that offered at least a chance of preventing what many in the party regarded (indeed still regard) as the calamity of the UK leaving the European Union, had already won their respect.

But that day he won their hearts, too.

And he carried on winning them by doing what virtually no other Labour politician could do without being condemned as a centrist ‘melt’ or told to ‘join the Tories’ – namely openly defying ‘the absolute boy’.

A couple of months later, Labour’s leader told Der Spiegel that Brexit couldn’t be stopped. Up popped Starmer on SkyNews almost straight afterwards to say that, yes, it could be.

True, Starmer wasn’t ultimately able to push his leader off the fence completely.

And it is hard to believe that the position Labour adopted in its manifesto – that, if elected, it would negotiate its own deal and then put it to a referendum against the option of remaining in the EU without its leader coming down on one side or the other – was one that, in his heart of hearts, he truly supported.

However, Starmer had, most members probably felt, done as much as was humanly possible – especially given how many of those with huge influence over the leadership seemed perfectly happy to see the UK leave either because they were Lexiteers or because they believed that any attempt to stop it happening would cost Labour the election (a belief that Labour’s catastrophic defeat last month appears only to have strengthened).

Whether Starmer has any genuine sympathy with that analysis is surely doubtful.

But nor is he likely to go out of his way to offend anyone who does. He is after all in the Labour leadership contest to win it, not simply to ‘broaden the debate’.

And he knows that there is a significant difference (64% compared to 40% in the final simulated round of voting, to be precise) between his support among Labour members who voted Remain and those who voted to Leave.

True, this is hardly a huge disadvantage given that at least eight out of ten Labour members wanted to stay in the EU. But why risk alienating the minority that didn’t?

He also has to think about the others who will take part in the contest – ‘registered supporters’ and affiliates, be they members of socialist societies or opted-in trade unionists – whose views on Brexit we know less about.

To do that would be to hand the votes of Labour’s leavers to Rebecca Long Bailey, whose support already splits, if we take the final simulated round of voting, 36% to 60% in favour of those members who plumped for Brexit at the 2016 Referendum.

The same concerns, of course, apply to Labour’s other leadership hopefuls.

For instance, Jess Philips, although her support among members seems fairly evenly split (proportionately speaking) between Leavers and Remainers, felt obliged to clarify her position after a television interview with Andrew Marr that was seized upon to claim she was committing Labour to campaign to rejoin the EU.

Just as importantly, anyone who has the faintest chance of emerging as Labour leader in April also needs to think not just about the ‘selectorate’ but the electorate – the millions of voters for whom the leadership contest is little more than a sideshow but often have views on Brexit that contrast sharply with those of Labour’s membership.

Starmer was surely right, as well as shrewd, then, to acknowledge to Marr that ‘We are going to leave the EU in the next few weeks and it is important for all of us, including myself, to recognise that the argument about leave and remain goes with it’ so ‘We have to adjust to that situation; the argument has to move on.’

And whoever the party chooses as its leader is going to need to handle the issue a whole lot better than did Jeremy Corbyn.

By Professor Tim Bale, deputy director at The UK in a Changing Europe.