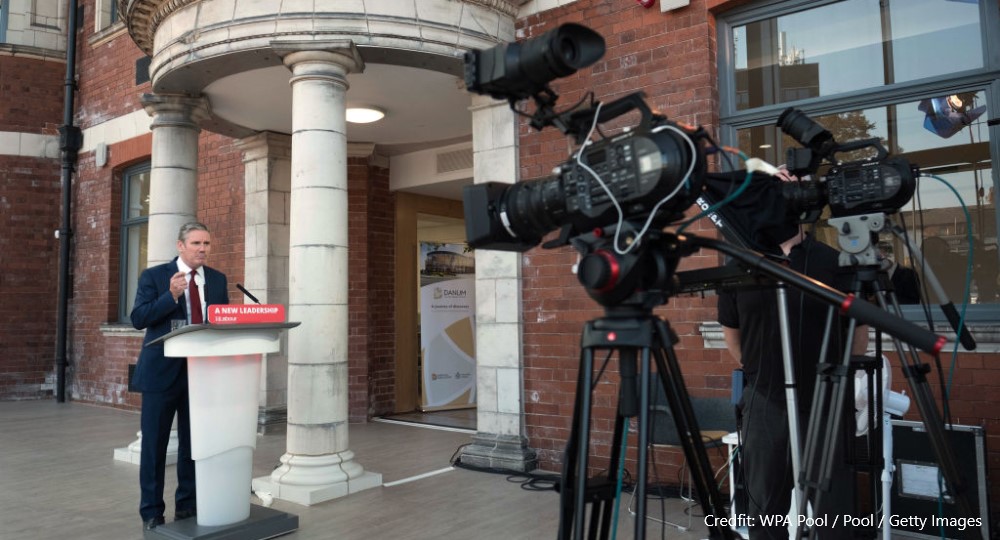 The leader’s speech at any party conference is always a big moment, and to some extent party conferences are merely a scaffold for that event (for some parties more than others). Everything is different this year, and keynote speeches are no exception.

Speaking to a screen is a very different discipline than to a crowded hall (as pretty much every university academic in the country is learning at the moment!). Less of a response from the audience to ride on, but also less risk in the form of protesters, sleeping audience members or an underwhelming applause (all risks shared by politicians and academics alike).

So, because of the very different setting, the delivery of Keir Starmer’s first conference speech as party leader was much less important than content. There was the usual ‘our opponents are useless, we will be (much) better’, and Starmer tried, not entirely convincingly, to burnish some Northern credentials. However, in addition to this there were four themes that stood out.

The first was the near complete absence of Europe or Brexit. In fact, ‘Brexit’ was mentioned only twice, and ‘Europe’ only once. All three of these were concentrated in a short paragraph, whose main purpose was to try to bury Leave/Remain as a political flash point. No hint of ‘Rejoin’ to be found.

This makes perfect sense for Starmer: it avoids giving the Conservatives the opportunity to label Starmer as a ‘will-of-the-people thwarting remoaner’ (not that the Conservative Party press team didn’t try). It also makes sense because there is very little the Labour Party can do about Brexit at the moment.

Facing an 80 seat Conservative majority, the opportunity for influence that Labour had during the May minority government is well and truly gone. This point also leads on to the second and third themes of his speech, namely being policy light and having a heavy focus on the need for victory.

Starmer’s speech had a near complete absence of specific policy proposals. As there is little Labour can do to implement much of anything there is arguably little point in saying what you might want to implement.

In addition, we are four years out from the next scheduled election, so the context in which that election will be fought is entirely unknowable, something Starmer expressly stated: “The challenges we now face mean that even the questions of 2019 already seem like ancient history. What we say at the next general election isn’t written yet.”

Starmer will no doubt be criticised for this, but there really is little point in laying out anything specific when having the power to do anything is absent, at least at the national level, and the future is so uncertain.

Indeed, depending on what happens with next year’s Scottish Parliament elections, and in Northern Ireland, the 2024 election may be fought with up to 90 fewer constituencies than now (quite apart from any boundary changes).

The absence of power was the third theme of Starmer’s speech. Some of the most memorable phrases of his speech came from his argument for the need for power.

The call for the party to ‘come out of the shadows’ (aimed at the Shadow Front Bench) was both evocative and a powerful reminder to a party that has a tendency towards ideological purity over the pursuit of power, that without power, nothing gets done.

The final theme of Starmer’s speech was the other shadow he wanted to get out from under: that of the former leadership.

From the main slogan of this year’s party conference (‘A New Leadership’), to being introduced by the Jewish former Labour MP Ruth Smeeth, Starmer was at pains to move on from the damage to the party’s image caused by the previous leadership, especially over its handling of anti-Semitism.

Indeed, one of the main attack lines by the Conservatives has been to associate Starmer with his profoundly unpopular predecessor. Starmer has certainly, and wisely, been at pains to move on from that period of Labour’s history.

So, as Starmer himself said, a single speech is unlikely to make much of a difference, especially when it was delivered in the somewhat sterile environment of social distancing.

However, the key themes of being policy light, moving on from both the Leave/Remain divide and the previous leadership, and the laser-like focus on the need to win power will likely continue to dominate the Starmer leadership.

Policy will eventually need to be fleshed out, but for the moment Starmer’s approach makes a lot of sense, and in terms of opinion polls seems to be slowly working.