EU migrant citizens in the UK

In the earlier years of the European Union, the number of citizens of EU Member States exercising their right to work and live in another Member State remained low. However, in the last couple of decades an improved legal framework for EU migrant citizens, improved access to higher education, educational mobility programmes, and starkly uneven economic and employment opportunities have facilitated an increase in intra-EU migration. Overall numbers of EU citizens moving from their country of origin to another Member State nonetheless remain relatively small. 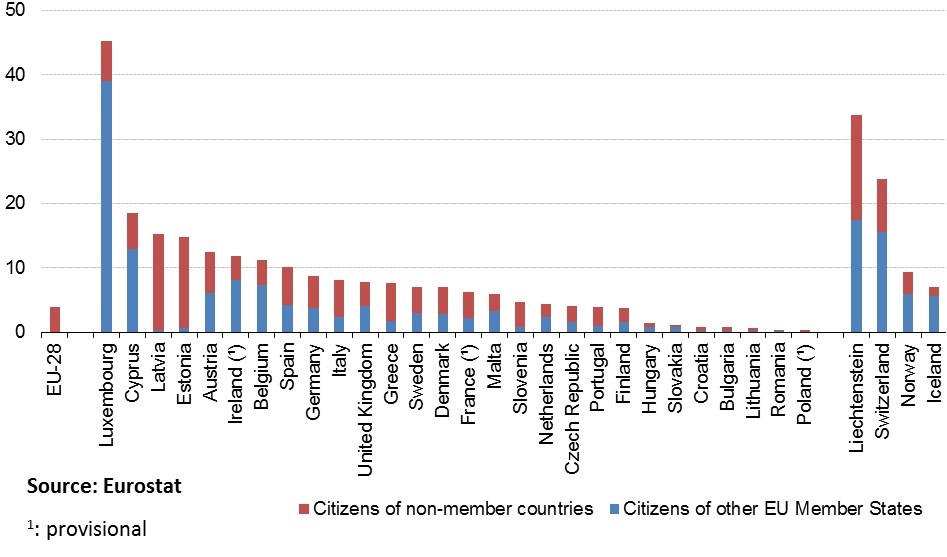 Figures produced by the UK’s Office for National Statistics (ONS) estimate that by the end of 2014 there were just over 3 million EU migrant citizens living in the UK, of which just over 50 % originate from the ‘new’ EU Member States, with the remainder coming from those states which were part of the EU prior to its 2004 expansion. In 2014, the largest nationality groups of EU migrant citizens in the UK were (in descending order) Polish, Irish, Romanian, Portuguese and Italian citizens.

Age of EU citizens in the UK

EU migrant citizens have higher employment rates than the national UK population (ONS). The Labour Force Survey statistics published in August 2015 show that 79.4 % of the 16-64 year old EU migrant citizens in the UK are in employment (rising to 84.6 % of those from the new EU Member States), compared to 73.5 % of British citizens. 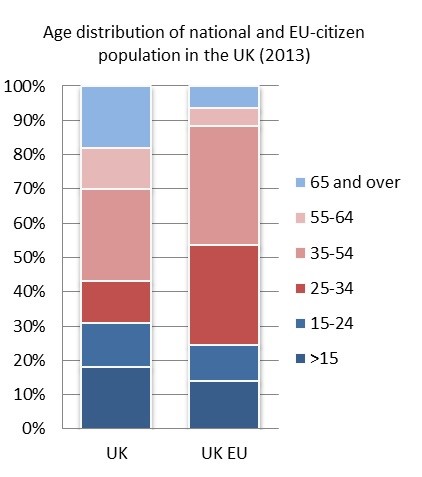 According to the British Labour Force Survey, EU migrant citizens in Britain are employed across all sectors of the economy, but with significant differences by country of origin. EU migrant citizens from Old Europe work predominantly in high-skilled service sectors, such as financial industries, education and health care (48 %), whereas those from Central and Eastern European countries primarily work in the distribution and hospitality sector (34 %) and in manufacturing (22.7 %), with a small but significant proportion working in agriculture (3.3 %). Bulgarians and Romanians predominantly work in construction (29.3 %), but also in banking and financial services (20.7 %). The UK government also actively recruits high-skilled workers (e.g. healthcare professionals) from other EU Member States.