Labour mobility in the EU: a brief history

The European Union was founded on four basic principles: free movement of labour, capital, goods and services: these “four freedoms” were set out in the original Treaty of Rome.

The point was to promote economic integration, in the widest sense, within the European area, which now covers 28 countries with a population of over half a billion people.

While the primary driver may have been a desire to promote European integration for its own sake, the founders of the EU also believed that there were large economic benefits.

In fact, economic theory is ambiguous on whether factor mobility (in this context, the free movement of labour and capital) is a complement or a substitute to free trade (the free movement of goods and services), but the general consensus among economists is that labour mobility, like trade, is welfare-enhancing, although there may be significant distributional effects.

However, while the economic case may be strong in principle, other free trade areas do not typically involve free movement of people. Labour mobility was seen as complementary not just to the economic aspects of European integration but to its wider political objectives.

The period from the late 1950s to the early 1970s saw strong economic growth in most of the EU. However, intra-EU labour mobility remained quite low; labour demand was therefore largely met by immigration from outside the EU.

The accession to the Union of Spain and Portugal in 1986 did not change this. The 1980s and early 1990s did see a renewed push for greater market integration, launched under the umbrella of the “Single Market”, however, the focus was very much on product markets.

So by 2000, although increasingly economically integrated in terms of trade, only slightly over 1% of EU citizens lived in a country other than their country of birth.

The potential downsides of this lack of mobility, despite the formal right to free movement, became more salient as the EU moved towards monetary union. In response to these concerns, the EU undertook a number of initiatives designed to turn “free movement of workers” from a formal right to one that appeared a realistic prospect to EU citizens.

The accession, in May 2004, of 10 new member states, including a number of members of the former Soviet bloc radically changed the dynamic of intra-EU labour mobility; it had not been seen as operating in an area where there were very large, persistent, structural differences in wage levels.

Given these disparities, there was clearly a possibility of much larger intra-EU flows than had previously been the case. Indeed, the impact of accession on intra-EU migration flows was large and sustained, with substantial increases in migration to all the major economies of the existing EU, in particular the UK and Ireland.

The main drivers were economic, the vast majority of migrants moved to work, attracted by either higher wages or greater job opportunities.  In 2007, Bulgaria and Romania joined the EU; this too led to a significant increase in flows, although this time Spain and Italy were major destination countries.

Most recently, the Great Recession and the ensuing economic difficulties in some eurozone countries have also resulted in further changes in intra-EU migration flows. In particular, out-migration has increased substantially from a number of countries where unemployment and/or youth unemployment is high: in particular Spain, Italy and Greece.

As a result, the proportion of EU nationals living in a member state other than their birth country rose to about 3%. In a number of major countries, including Germany, the UK and Spain, it is now about 5%; in Ireland – traditionally a country of emigration rather than immigration – close to 15%.  There has clearly been a step change in intra-EU mobility. 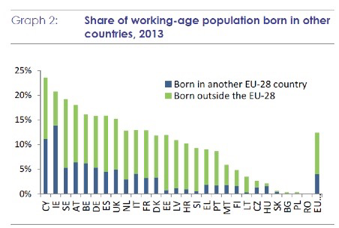 The primary motivation for migration was work, and most new migrants are in employment, with employment rates for intra-EU migrants well above rates for natives in most EU countries. Given this, the overall macroeconomic impact would be expected to be positive, and the evidence to date suggests it has been for most countries.

One notable feature of migrants from the new member states was that, although they were not necessarily low skilled, they primarily moved into low skilled employment in destination countries, and were concentrated in certain sectors.  Public and policy concern has therefore focused on the distributional impacts – in particular on employment and wages for native low-skilled workers.  There is now a considerable empirical literature on this topic, and the conclusions are surprisingly positive. A UK government review found  “To date there has been little evidence in the literature of a statistically significant impact from EU migration on native employment outcomes”.

Meanwhile, while evidence is patchy, other impacts on resource allocation (prices, productivity, etc) appear to have been broadly positive.

What about the sending countries? Out-migration has reduced unemployment and raised wages in sending countries, which also benefited from remittances. However, there are concerns about skill shortages. In Latvia and Lithuania, while emigration has clearly proved an invaluable safety valve during the crisis, there is cause for concern about the longer term demographic impact of emigration on an already ageing population with low fertility rates.

Despite the considerable evidence that migration flows were driven primarily by labour market factors, there is significant public concern that immigrants are attracted by the prospect of generous welfare benefits and are likely to become dependent on the state.   However, that while there may be individuals who do indeed move between member states to take advantage of the availability of social benefits, such a phenomenon is not quantitatively significant.

More broadly, the short-term impact of intra-EU migration appears to be positive for receiving countries.  It is hardly surprising given that young migrants in employment make an initial positive fiscal contribution; proper assessment of fiscal impacts requires a lifecyle perspective. In this context, there are various reasons to expect the impact to still be positive (in particular, migrants tend to arrive after they have left compulsory, publicly financed education).

Many analysts thought that an initial surge of migrants from the new member states was likely, but that net migration was then likely to fall, as economies converged and return migration increased.  However, intra-EU migration, particularly to the UK and Germany, remains significant.  For the first time, intra-EU labour mobility is becoming as important a driver, political and economic, of European integration as trade and capital flows.

While concerns about the impact of free movement (as well as immigration from outside the EU) in some countries have made it a major political issue, the economic impacts have been largely benign. There have been some, albeit relatively small, macroeconomic and fiscal benefits for destination countries, while most sending countries (with the possible exception of the Baltic states, over the longer term) have also benefited. Negative labour market impacts have been surprisingly small.

This blog, from the National Institute of Economic and Social Research, summarises Jonathan Portes’ review article, “Labour Mobility in the European Union”, published June 15, 2015 in the Palgrave Dictionary of Economics. The full article, which includes detailed references for all the research summarised here, is available free to read for a limited period on the Dictionary website.