Over the last thirty years, Labour leaders of different stripes have taken a wide variety of positions on changing the voting system for general elections.

Tony Blair also opposed electoral reform, but at various points pretended to the Liberal Democrats that he really supported it – including in 1997 when Labour’s manifesto promised a referendum on electoral reform that never happened.

Gordon Brown was in favour of electoral reform, and included a commitment to a referendum on moving to the Alternative Vote (AV) system in 2010, but nobody paid any attention.

Ed Miliband also supported electoral reform, though when a referendum on AV was held in 2011 as one of the conditions of the Conservative-Liberal Democrat coalition he chose not to explain why.

The ‘Yes’ to AV side was thoroughly defeated by 67.9% to 32.1%. The resounding rejection of AV in 2011 has cast a long shadow, and has since been pointed to as proof of the public’s lack of appetite for changing the electoral system. Given this, Jeremy Corbyn had little cause to come up with a position on the matter at all.

The row over whether Labour should back a move to a more proportional voting system is rumbling on at this year’s party conference in Liverpool. Keir Starmer has now been faced with the decision of what to do about an issue that excites the passions of enthusiastic campaigners, but has largely been seen as an esoteric issue for those who are not political anoraks.

He is making that decision in a very different context to his predecessors. The latest gold standard British Social Attitudes (BSA) survey finds that, for the first time since they began asking about electoral reform in the 1980s, a majority of the public support changing the voting system. This is largely because, also for the first time, a majority of Labour Party supporters back reform. In 2011, less than 30% of Labour supports told the BSA they were in favour of changing the electoral system. In their new survey, that figure is 61%.

Equally, the internal Labour politics of electoral reform appears to have transformed. The issue used to be seen as an exclusive preoccupation of the social democratic (or middle class) wing of the Labour Party. As Dennis Skinner once put it, socialists see elections as a class battle and ‘To the victor, the spoils!’. Now, a victory for proportional representation (PR) will be, in part, a victory for the left, and two of the three largest unions (Unison and Unite) support reform.

Yet, in one important sense the context remains the same: there remains significant opposition to electoral reform among Labour Members of Parliament. It is not just Angela Rayner who backs the current system, recently declaring herself ‘a first-past-the-post girl’. In fact, the Parliamentary Labour Party (PLP) appear to be split in two on whether they support or oppose the existing system.

In the summer of 2021, we worked with the pollster Ipsos to present MPs with a question on electoral reform designed by the British Election Study, and which was also asked of the British public. A representative sample of MPs and the public were presented with a binary choice between two statements – one on the key benefits of first-past-the-post, and the other proportional representation – and were asked to choose which they thought was most important.

(1) Is it more important that one party gets more than half of the seats in the House of Commons, so that it can govern alone (the key benefit of ‘First Past the Post’); or

(2) Is it more important that a party’s share of seats reflects the percentage of votes it receives? (the key benefit of proportional representation).

We find (unsurprisingly) Conservative MPs and Conservative voters in agreement: a large majority of both favour the majoritarian (First Past the Post) position. Yet, for Labour, there is a clear internal divide: while Labour voters favour PR by a margin of three to one, our survey of the Parliamentary Labour Party found MPs split effectively in half: in this binary choice 52% support the First Past the Post option, 48% the proportional representation proposition. 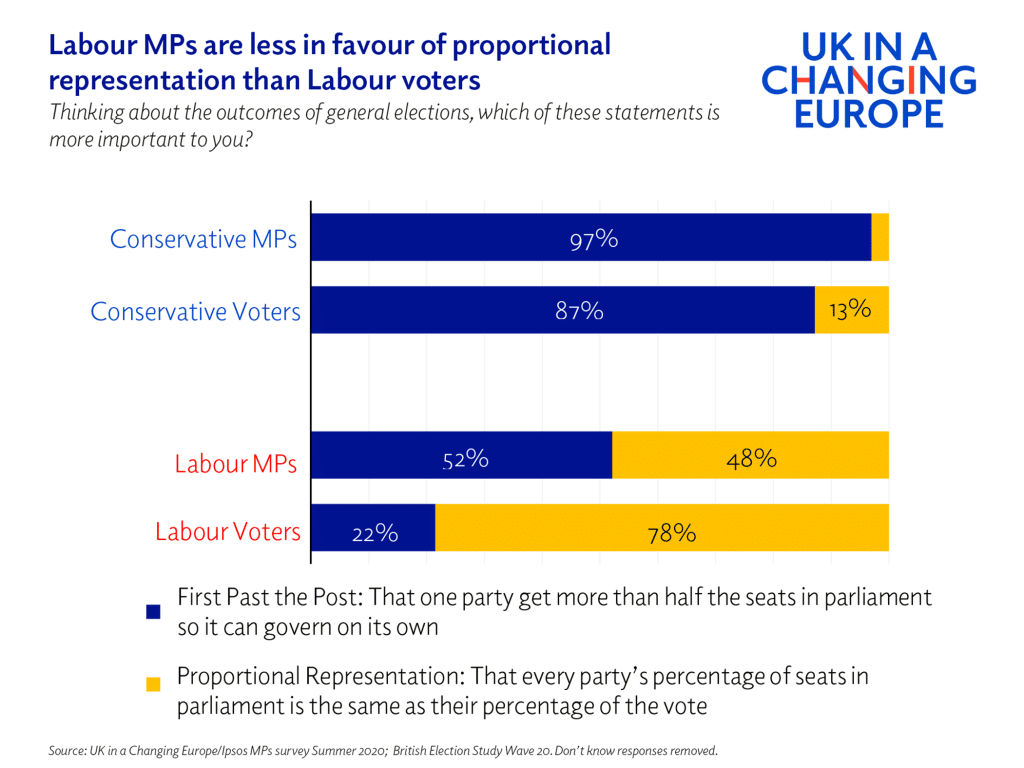 For the mainstream of the Parliamentary Labour Party, a different set of considerations to that of the unions or the left of the party have meant that support for electoral reform has always been something of a minority pursuit. It is perhaps natural that many see the system they were elected under as, broadly speaking, a jolly good thing – not least as it is far from guaranteed that their job would survive under a different process for electing MPs.

Less cynically, many Labour MPs – who conduct weekly surgeries with their constituents, and who (mostly) live and breath the area they represent – value the direct constituency link and see it as a vital part of their work.

These results are significant. The support of the PLP does not just matter when it comes to whether this year’s conference motion on backing PR makes it into any manifesto (though that will likely be the key determining factor). It will also make a difference if (big if) any referendum and/or legislation on electoral reform were to be brought forward after the next election in inter-party negotiations.

After all, one key lesson from the doomed campaign for the Alternative Vote in 2011 was that without the full-throated support of the Labour Party, any movement for change to the voting system could come unstuck in a national campaign. Any attempt to push through reform absent a referendum will have to reckon with the fact that Labour MPs might not vote for it – and opposition might be even greater once the party is in government (albeit, potentially, a minority government). One of the eternal hurdles for supporters of electoral reform is that as the current beneficiaries of the existing system, those with the power to change it – the governing party – have little or no pragmatic incentive to do so.

The campaign for electoral reform is in the strongest position it has been for quite some time. Yet the evidence suggests that – despite the support of Labour party members – the group that maybe matters most to their cause remains hardest to persuade.