Labour, voters and the Brexit conundrum 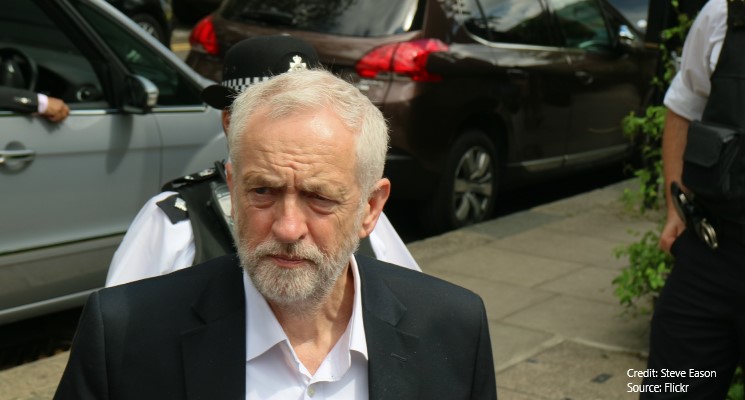 Throughout the election campaign, Labour has struggled to strike a balance between keeping both its Remain and Leave supporters happy.

And it is a genuine conundrum: nearly two thirds of Labour MPs elected in 2017 represented seats that had a Leave majority in the 2016 referendum. On the other hand 68% of 2017 Labour voters had voted Leave in the referendum.

In a previous blog I showed how it was a mistake to make inferences about individual voters from constituency data: at the time of the European Parliament elections earlier this year more than two thirds of potential Labour voters in Leave constituencies said they would vote to remain in another referendum.

But is that still the case going into the general election? And more importantly who are the potential Labour voters who still need to be won over?

I use data from wave 17 of the British Election Study internet panel collected between 1 November and 11 November to find out.

I define a potential Labour voter as someone who scores Labour five or more on the question “How much do you like or dislike each of the following parties?”

This gives Labour a total potential support of 50%. Overall, 71% of these said they would vote to remain in the EU in another referendum compared to 20% who would vote to leave (the rest saying they would not vote or did not know).

Although we wouldn’t expect Labour to convert all these sympathisers to actual votes, they would need to win a large proportion of them to win the election.

In fact at the start of the campaign less than half of them (43%) intended to vote Labour. Nearly one third said they didn’t know how they would vote or that they would not vote.

The rest were intending to vote for the Liberal Democrats (30%), the Conservatives (20%), or for one of the other parties (approximately 21% combined).

Looking at things in a little more detail, we can define untapped  potential Labour voters as those who scored the party at five or  more on the like scale, but who said they did not intend to vote for them at the start of November.

Who are these untapped potential Labour voters? 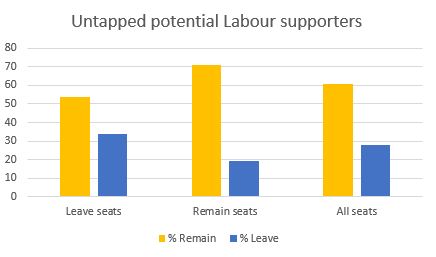 When we break this down by type of seat the chart shows that, even in seats that voted Remain in 2016, Remainers (54%) outnumber Leavers (34%) amongst these untapped potential Labour voters.

This is despite the fact that they are already converting a much larger proportion of Remain supporters than Leave supporters.

Not surprisingly the difference is greater in Remain seats than in Leave seats, but even in Leave seats there is still a clear majority of Remainers.

Even if we restrict our analysis to seats with a Leave vote of over 60% in 2016 we see a Remain majority (50:39) in this reservoir of potential Labour support.

Of course it is not just Brexit that separates these untapped potential voters from actual Labour voters. They are also less sympathetic towards Labour in other ways.

For example, they are less left-wing than Labour voters and less in favour of redistribution. Perhaps most notably they are a lot less keen on Jeremy Corbyn, giving him an average score of 3.9 out of 10 compared to 6.9 among Labour voters (see chart below).

While it is not surprising that untapped potential voters are less sympathetic to Labour in many ways, what is important is how that varies by Brexit preferences.

He is still unpopular, but much less unpopular than among Labour untapped Leave supporters. 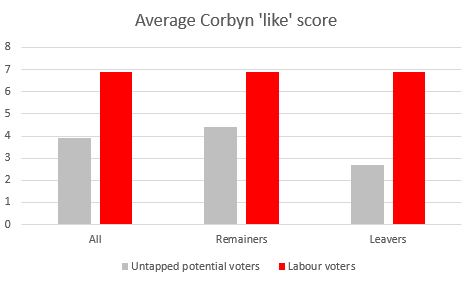 This is not only true of the leader. If we look at the same breakdown of support for pro-Labour positions on the left-right scale and on redistribution we see the same picture.

Perhaps most crucially those untapped Remain voters are more likely to consider voting Labour in the future.

We ask every respondent “How likely is it that you would ever vote for each of the following parties?” The average score on a 0-10 scale for untapped Remainers was 5.6 compared to 4.5 for Leavers.

In other words not only are there fewer potential Labour Leave voters, but they would be more difficult to convert.

Of course these differences reflect Labour’s strategy so far and had they chosen a different strategy on Brexit these patterns might have been different. Nevertheless, the evidence is quite overwhelming.

As we show in our book Electoral Shocks, there has been a fundamental shift in the main drivers of electoral support, and Labour’s relative unpopularity amongst Leave voters is unlikely to be reversed overnight.

The implication is clear: if Labour is to close the gap between themselves and the Conservatives they have to win over a much larger proportion of Remain voters – even in Leave constituencies.

By Professor Edward Fieldhouse, Professor of Social and Political Science at the University of Manchester. He is principal investigator of the Scientific Leadership Team of the British Election Study.