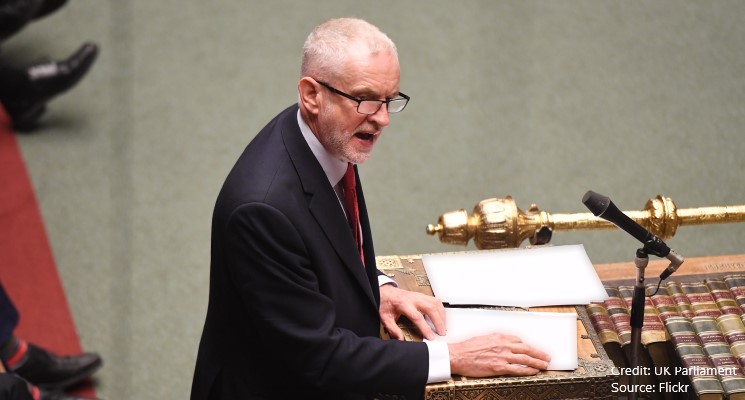 In the heat and noise of a general election, it helps to have clearly framed, compelling and popular policies and arguments which cut through to voters. Labour’s Brexit message seems to fail this simple test.

Polls suggest that voters are much less likely to understand the party’s Brexit policy than those of its rivals.

But is Labour’s Brexit policy inevitably a campaign liability in the upcoming election, or can the party, even at this late stage, find a way of presenting it more effectively?

The dilemma facing Labour over Brexit is easily stated. The 2016 Brexit referendum presented the party with a serious challenge.

Almost inevitably, therefore, to avoid alienating either wing of its electoral coalition the party developed a policy of ‘constructive ambiguity’.

Its going into the election reflects this. Labour propose that once elected they will ‘immediately’ legislate for a second referendum.

Following this, and within three months of forming a government they will renegotiate a ‘sensible’ deal, and within six months a referendum will be held – in which voters will have a choice between endorsing this newly-agreed deal, or remaining in the EU.

Contrast that with the unambiguous clarity of its main rivals’ Brexit policies.

On one side, the Conservatives and the Brexit Party are campaigning to deliver Brexit, whether in a softer or a harder form.

On the other, the Liberal Democrats, Greens and Scottish and Welsh nationalists will, if elected, revoke Article 50 and remain in the EU.

In part, the party’s strategy for this election will be to try to divert the national conversation away from Brexit and all the challenges that presents for Labour, and move it towards other policy areas such as the NHS, public services and putting an end to austerity, where it enjoys a clearer position and some degree of public support.

So much was evident from Labour’s campaign launch in Battersea on 31 October.

But the upcoming election is not likely to be normal: political parties face the uphill task of motivating a weary electorate to support them at the polls, and the issue of most importance to citizens at the moment is Brexit.

However much Labour wants to change the terms of the debate, the dominance of this issue means it is likely that the campaign conversation will keep returning, stubbornly, to Britain’s future relationship with the EU.

This, in turn, poses a challenge: as much as Labour might hope to dominate the terrain on non-Brexit policy areas, it still needs to have a plan for when Brexit comes up in the conversation.

Given that, Labour will probably need to take a strategic approach and find a way to sell their existing ‘somewhere-in-between’ policy.

In an election campaign, Labour might look to shore up its Brexit flank by establishing a clear, simple statement of its policy early on in the campaign, and then by mobilising networks of Labour supporters to share the message across a wide array of traditional and new social media platforms.

Particularly on social media, the party could make constructive use of the possibilities of ‘controlled interactivity’ to develop a new conversation on its Brexit policy.

For this strategy to be successful, the party’s leadership and the Prospective Parliamentary Candidates would need to promote a clear message, and supporters should also be directed to share the information across their personal social networks.

This trend for controlling the direction of online supporters’ activism has grown and evolved in UK and US elections since around 2004.

Evidence shows that under the right circumstances, networks on social media can play an important role in the agenda-setting process.

Directing supporters to share their Brexit policy is one vital way to expand the reach of these key messages.

Mobilising online networks to engage in debate, and to challenge the Conservative Party’s likely accusation that Labour are fence-sitters when it comes to Brexit, is also likely to play an important role, as academic scholarship has demonstrated that such challenge is more effective when received from someone personally known to you.

Labour’s supporters therefore have a crucial role to play in communicating the party’s Brexit policy not just on the doorstep, but online too.

Given the last three years there can be no doubt that a large part of the agenda for this election is already set, as the issue of Brexit continues to dominate.

Even if Labour’s policy on Brexit is complicated and its positioning incredibly delicate, it still needs to find a way of articulating that policy clearly and simply, and then – in order to be able to meet the Conservatives on this playing field – to use engaged supporters who are mobilised and effectively directed.

None of this is to say that this will be easy, or that success is guaranteed. However, Labour stands to gain little, and to lose a great deal, if it allows other parties to frame its Brexit position for it.

It needs, even at this late stage, to take the initiative and to do so in ways that offer at least the possibility of circumventing the powerful framing of the debate provided in the mainstream media.

Starting viral conversations via targeted campaigning on new social media might be one such approach.

Labour has a large membership, many of whom are new social media-savvy and well-connected.

Viral on-line conversations helped power Corbynmania in 2017, and they could they also help sell Labour’s Brexit position in 2019.

By Dr Amy P Smith, University Teacher in British Politics/Public Policy at the University of Sheffield.