Labour’s message to the electorate on Brexit 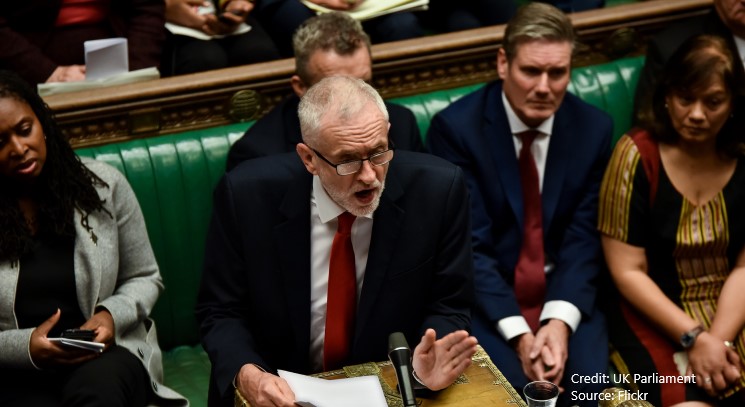 The long anticipated general election is now on the horizon as the EU looks set to agree an extension to Article 50 until 31 January 2020.

At this election, voters may have the opportunity to fundamentally change the direction of Brexit.

What is Jeremy Corbyn, and Labour, planning to do about Brexit if they win?

Labour has promised to immediately legislate for a second referendum, arguing that it has faith in the people to overcome the current stalemate.

The suggestion is that the ballot papers will have two choices: to remain in the EU or to leave the EU with a deal – but crucially, one which differs radically from what is currently on offer.

The new deal will be negotiated afresh by the newly-elected Labour government.

The new deal would almost certainly be softer than the current agreement, but Labour still wants to provide voters with the opportunity to leave the EU. It does not want to be seen as an exclusively Remain party.

A second referendum poses two challenges for the Labour frontbench.

First, many senior Labour politicians have stated, or strongly suggested, they would campaign for Remain during the second referendum – and so would have to campaign against their party’s new deal.

This includes the shadow Brexit Secretary, Sir Keir Starmer, who told the Labour conference in September “Conference, you know where I stand on the question of Remain: I’ve said many times that I will campaign for it”.

So if Starmer became the Brexit Secretary in a newly-elected Labour government, it would be hard for him, and for that government, to defend a deal when he himself would prefer to remain in the EU.

Secondly, in this future referendum, the Labour Party would have to officially stay neutral. Labour would be the government and would be expected to back their negotiated deal to leave the EU.

Most Labour MPs are likely to take a different stance to the government, especially if they are representative of the Labour membership, which overwhelmingly wish to remain.

Divisions between Labour MPs who believe in enacting the result of the first referendum and those who want to remain would intensify.

Labour only has to look across the Commons to see the internal problems that stem from taking a neutral position in a referendum.

Meanwhile, negotiating a new withdrawal deal requires cooperation from the EU. Reopening negotiations with the UK for a third time is not out of the question but the EU’s patience must be wearing thin.

In Labour’s favour is proposals a softer Brexit, which are likely to be welcomed by EU negotiators.

Another added complexity is the time frame for agreeing a new deal.

The earliest possible dates for the next election are 5 or 12 December 2019.

Labour have previously pledged to renegotiate within three months of being elected to office, and to hold a referendum no later than six months after gaining office.

That makes the window in which to negotiate a deal very brief indeed – and it may be that the talks would go beyond the current extension of 31 January – meaning yet another extension.

The referendum on Labour’s deal would also have to be held within this timeframe.

The period of official campaigning was 69 days in the 2016 EU referendum.

Renegotiating the withdrawal deal and holding a second referendum is unfeasible by the end of January. Labour would be unable to provide a clear end date to the UK’s Brexit misery.

All this means that Labour cannot really promise a swift end to the Brexit process, which has lingered since the 23 June 2016.

Voters looking for a swift end to Brexit and a party with a clear policy stance can vote numerous rival parties: the Liberal Democrats, the Brexit Party and the Conservatives are all promising to deal with it quickly and decisively.

Labour occupies a unique position of being unable to be strictly pro-Remain party or pro-Brexit party.

This has resulted in the caveated Labour policies, and the attempt to try and please its membership, core voters and the traditional Labour heartlands.

What do voters think about Labour’s position on Brexit?

It seems that the second most senior shadow cabinet member, John McDonell, agrees with them.

In a recent interview with Alistair Campbell for GQ, McDonell conceded Labour’s Brexit policies were difficult to explain to the public.

In addition, both sides of the debate are unimpressed with Jeremy Corbyn as Labour leader.

Both sides have their reservations with Corbyn: Remainers for his history of anti-EU comments and lack of enthusiasm for during the last referendum campaign, and Leavers feel that the type of Brexit Labour wants to negotiate isn’t really Brexit at all.

The challenge that faces Labour is to convince enough voters that holding a second referendum will bring about an end the parliamentary deadlock that has caused previous withdrawal bills to fail.

Labour will emphasise putting the decision in the hands of the electorate and not politicians in the House of Commons.

In many people’s eyes the campaign has already begun. Labour’s compromise message to the electorate is about to be tested.

By Peter Andersen, PhD Candidate in Politics at the University of Liverpool.