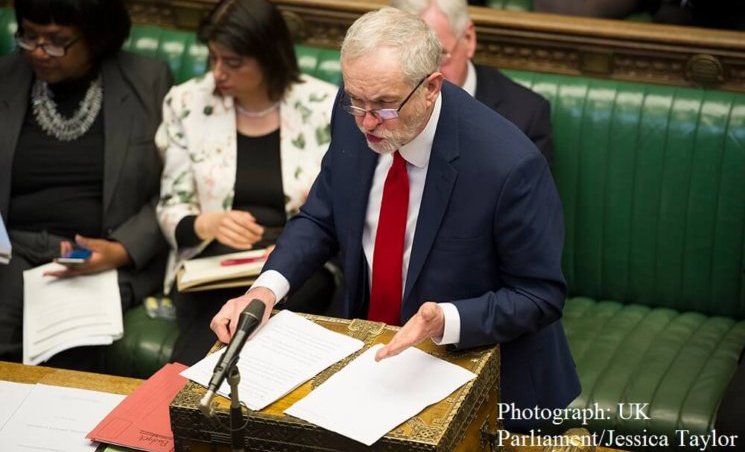 Europe or no Europe, the UK’s main opposition, the Labour Party, would be in a mess at the moment. The party has been losing vote share ever since its landslide General Election victory in 1997; it was plunged into a state of shock by its unexpected election defeat in 2015; Labour’s Parliamentary Party is dismissive or contemptuous of their unpopular leader, Jeremy Corbyn; Mr Corbyn’s inner circles gives little impression that they have a positive plan or overall direction for Labour, other than resistance to ‘the cuts’ at home and war abroad – laudable sentiments for a socialist party, to be sure, but hardly a roadmap back to government.

It is, however, the great issue of Britain’s exit from the European Union that has done most in recent days to show off Labour’s deep divisions and uncertainty. 52 Labour MPs rebelled against the party’s compulsory instruction to vote for triggering Britain’s exit process under Article 50, as against 162 who voted with the leadership and for Article 50.

The rebels’ ranks included three whips, supposedly in charge of party discipline, and eleven other shadow ministers: all of them were allowed to keep their jobs, in a further weakening of Labour’s coherence and unity. Four members of the actual shadow cabinet, and one more junior minister outside the shadow cabinet, resigned rather than vote for the legislation.

Labour looked shambolic – bereft of any strategy, divided, unmanageable. It is a great paradox of the current situation that the Conservatives, who suffered a much smaller and more muted rebellion, seem to have avoided giving such an impression – at least for now. The Conservative Government elected in 2015 under David Cameron has entirely collapsed under the strain of the Brexit vote, a referendum which they called and for the consequences of which they are responsible.

During the tragi-comic and chaotic period of political bloodletting that followed, the party, at its highest levels, threatened to dissolve into warring factions. And yet it is Labour that is apparently suffering all the damage from the public’s decision to leave the EU. What explains this apparent contradiction?

One reason for Labour’s agony over Brexit is just how divided its electorate are. The academic Chris Hanretty, of the University of East Anglia, has estimated that 71 Labour-held constituencies voted Remain, and 160 voted Leave. That is about a 70%-30% split towards Leave, at least in terms of constituencies.

This look at the raw seat-by-seat figures does not, however, quite explain why Labour seem so much more divided than the Conservatives, since Conservative-held seats split about 76%-24% towards Leave while the majority of Conservative MPs backed Remain. One reason for these different impressions is that, of course, Theresa May, as Prime Minister, has been able to bind together her MPs with their voters by simply saying that the Conservatives accept the result of the referendum.

Since most of them sit for Leave-leaning seats, simple acquiescence will put them in line with their voters: more than enough reason to explain why only seven Conservative MPs voted to give Parliament a meaningful say in the final vote on any deal Mrs May can reach with the EU.

The extent and fervour of Labour’s divisions provide more parts useful in solving this puzzle. Labour MPs sit both for some of the most Euro-enthusiast, and Euro-sceptical, seats in the country. The top four Remain-voting constituencies (Hornsey and Wood Green, Streatham, Bristol West and Hackney North and Stoke Newington) were all won by Labour in 2015, while there of the areas where Leave won its largest victories (Kingston upon Hull East, Stoke-on-Trent North and Doncaster North) also have Labour MPs. Some of the shadow front bench members voting against Mr Corbyn’s instructions were facing huge pro-Remain majorities back in their constituencies: enough, given Labour’s parlous position in the polls, to lose them their seats.

Although the majority of Labour seats were for Leave, a large majority of Labour voters chose Remain on the ballot paper. They were heavily concentrated in cities with Labour MPs. Thangam Debbonaire, who remained as a whip despite defying her leader, sits for Bristol West: a huge 80% of her constituents probably voted Remain. Jo Stevens, the MP for Cardiff Central who resigned from her position as Shadow Welsh Secretary, sits for a seat where 70% of the voters opted for Remain.

That dividing line is also about much more than Europe, in a way that it is not for the Conservatives. The Labour Party now sits astride a potentially explosive division in the country as a whole, between liberal and cosmopolitan big cities and university towns, broadly happy with economic globalisation and high levels of immigration, and small and medium-sized towns across Northern England and Wales which often voted overwhelmingly for Leave in June 2016.

It is hard to see the party bridging that divide, as personally and culturally both the present leadership and most of Labour’s MPs share much more with the former outlook than the latter, no matter how many calls they issue to ‘listen to’ and ‘understand’ the sense of alienation from active politics that is clearly taking hold outside large, densely populated urban areas and campus towns.

Brexit has hit Labour at a time when it was already tottering, suffering from long-term decline in its blue-collar and working-class vote, divided between left-wing activists and a more pragmatic party machinery, and deeply uncertain as to its next moves. Its Brexit spokesman, Sir Keir Starmer, is articulate, able and forensic in Parliament: but he will find it very difficult to find any point of overall agreement on his side of the House. On the domestic front, at least, the Government will probably be able to do just as it wishes while negotiations on a final exit deal last.

Glen O’Hara is Professor of Modern and Contemporary History at Oxford Brookes University. He is the author of a series of books about modern Britain, including The Paradoxes of Progress: Governing Post-War Britain, 1951-1973 (2011). He is currently working on A History of Water in Modern Britain (forthcoming, 2017). Read more of his blog posts here.