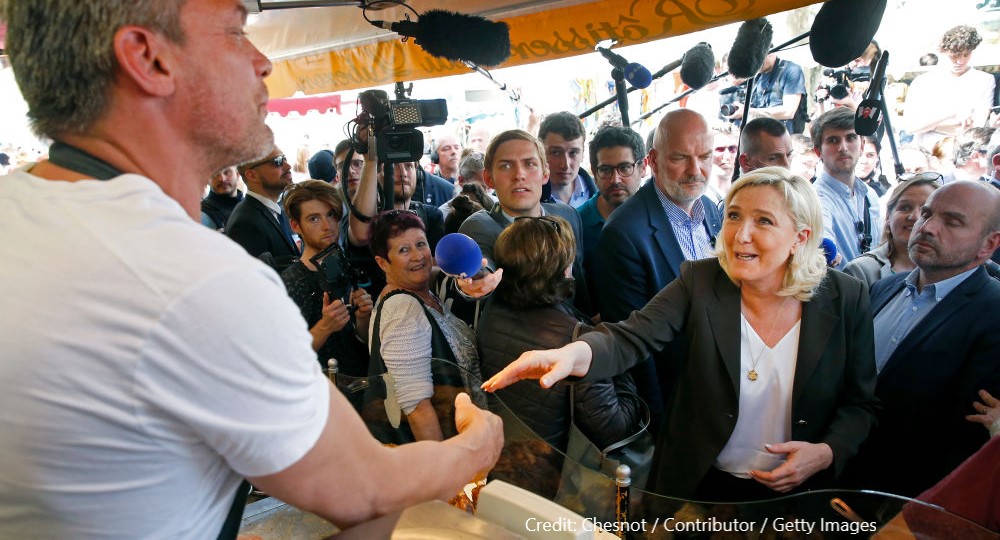 The French presidential election showdown between Emmanuel Macron and Marine Le Pen puts the country at a crossroads on foreign policy. As in 2017 and now, Le Pen’s campaign focus has mainly centered on domestic concerns.

Yet it is in her foreign policy positions where Le Pen is at her most ambiguous. Le Pen has toned down her rhetoric on the EU, NATO and Russia, but this approach barely veils her extreme stance. Will it be enough though to lure French voters into supporting her over Macron?

Le Pen has made no secret of her admiration for Vladimir Putin, Donald Trump and Boris Johnson. She repeats what most French presidential candidates say – that France has a special role in the world, and that it should become once again a great independent nation and influence world events.

Her idea of a European Alliance of Nations that would ‘aim to gradually replace’ the EU, implies in fact a parallel organization, without timeframe and no clear membership. This sounds like a gradual withdrawal plan from the EU.

Le Pen wants to change France’s status in the EU by reintroducing permanent border controls between Schengen members. She would advocate breaking EU law to limit access to social security to anyone without at least one French parent; unilateral reductions in EU budget contributions; French priority access to housing; ‘buy French’ requirements on government; and additional state aid to farmers.

These policies would lead to the opening of infringement proceedings in the ECJ for any one of the measures, and would ultimately lead to France no longer able to maintain their membership of the EU.

In terms of security policy, Le Pen pursues a strategy of ‘free hands’, including withdrawal from the NATO integrated military structure; an end to the defence industrial cooperation with Germany; and more defence cooperation with the UK. This would lead to major political tension over compromising of security   architecture in Europe, especially if her ambiguous position on Russia remains in place.

These planned actions would cause very deep problems for France’s place in the EU. French disengagement on this scale would raise fundamental questions about the EU’s operation, without any clear alternative in place.

Le Pen takes issue with the primacy of EU law, arguing that the French constitution should come first. Her views on border controls would come in direct confrontation with the EU’s freedom of movement principles, as would her support for protectionist policies in support of French workers.

On NATO, Le Pen’s view is that France would be better off without the treaty alliance, so that France would ‘be no longer caught up in conflicts that are not ours.’ A Le Pen presidency would likely see France become a spoiler, along with Hungary, when it comes to Europe’s largely unified response to the war in Ukraine.

Like Hungary’s newly re-elected prime minister Viktor Orbán, Le Pen has been outspoken on European weapons transfers, saying that sending weapons into Ukraine risked turning France into a co-belligerent in the war.

Le Pen’s well-publicized proximity to Putin does not seem to have affected her performance in the first round of France’s presidential elections. But that could change in the second-round vote on 24 April 2022. Putin welcomed her in the Kremlin in 2017, a few weeks ahead of France’s last presidential election. The photo of their handshake appears in one of Le Pen’s current campaign flyers, printed before the war and later scrapped.

In her manifesto, she pleads for an ‘alliance’ with Russia, for example regarding European security policy. For her last presidential election campaign in 2017, the far-right leader received a €9 million ($9.8 million) loan from a Russian bank.

In February 2022, Le Pen said she did not believe ‘at all’ that Russia would invade Ukraine and condemned ‘a misunderstanding of the issues and thinking’ in Russia.

Since the beginning of the war, Le Pen has backtracked, calling the massacres of civilians in Bucha ‘war crimes’ and calling for a UN-led investigation. Le Pen said once the Russian-Ukrainian war has ended and settled by a peace treaty, she would call for a ‘strategic rapprochement between NATO and Russia’.

Le Pen’s 2022 campaign has seen her dropping her past unpopular proposals to ditch the euro or leave the EU. ‘Nobody is against Europe,’ she said. ‘I would not stop paying France’s contribution to the EU, I want to diminish it.’ On the one hand, she made clear that any ‘Frexit’, along the lines of Britain’s exit from the EU. was not on her agenda.

On the other hand, Le Pen has argued that French predictions that Brexit would prove ‘a cataclysm for the English’ had not come true. ‘The British got rid of the Brussels bureaucracy, which they could never bear, to move to an ambitious project of global Britain,’ she said. But she added: ‘This is not our project. We want to reform the EU from the inside.’

However, her proposed economic, social and migration programme would mean breaking EU laws and would be incompatible with EU membership. A Le Pen victory on 24 April would have disastrous implications for France and the EU. She would rely on the lack of knowledge among a large group of French voters who do not know how the EU works.

Much could depend on the TV debate between Le Pen and Macron on 20 April 2022. Five years ago, Le Pen was widely judged to have failed badly in a damaging televised clash with Macron. This time around, she will probably perform better, although her knowledge and substance on policies rather than campaign slogans is expected to get tested by Macron.

Le Pen’s campaign presents policies which are a great threat to the EU, NATO and the global anti-authoritarian coalition. How Le Pen describes her foreign policy positions on the campaign trail is clearly disingenuous.

She wants to leave the EU; she is against the NATO alliance, and she holds close ties to the Kremlin. Like any populist, Le Pen is adapting her rhetoric to fulfil her political ambition. The danger will be in her deeds, if elected.