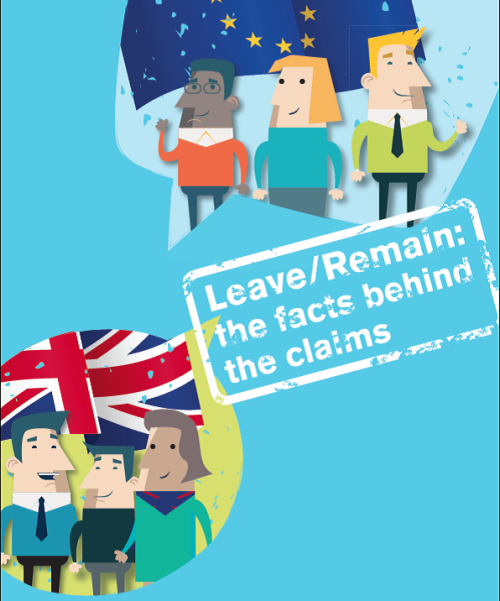 The Leave and Remain campaigns in the EU referendum have been putting out misleading and inaccurate information leading academics and a fact checking organisation have found.

Academics from The UK in a Changing Europe, together with fact-checking organisation, Full Fact, investigated 24 claims from the both sides in the referendum, many of which have been reported as fact, and found them wanting.

Twelve themes were analysed and subjected to rigorous analysis to ensure information about the EU is as accurate as possible. Themes include economic costs and benefits of EU membership, EU regulation, democracy, immigration and security.

Full Fact and The UK in a Changing Europe contrast the facts with the claims, highlighting inaccuracies, omissions and misleading information as well as where they are accurate.

The claim the UK sends £350 million per week to the EU is wrong. This is what we would send to the EU if it wasn’t for the UK’s budget rebate. The rebate is an instant discount on what we would otherwise pay.

The CBI figure of £3,000 quoted by Remain campaigners is not a credible estimate. It is based on a selection of studies produced at different times (some date back well over a decade), with different methodologies, and designed to answer different questions.

Outside the EU, the UK would be free to decide on which issues and with which countries it would wish to pursue cooperation. The UK already collaborates bilaterally with other countries outside the EU, such as the US, on these issues.

Discussions about democracy are essentially about yardsticks. Depending on what you look at, and compare against, you will get different answers.

Leaving the EU would not automatically lead to a large reduction in immigration. If we wanted to continue to participate in the EU single market then one way to do so would be for us to join the European Economic Area. But free movement applies to EEA members.

Exports to other EU countries make up about half of goods exports, and about 44% of total exports. But it is correct, as Leave campaigners argue, the share of all exports that go to the EU has been falling, down from 55% in 2002.

Professor Anand Menon, UK in a Changing Europe director, said: “The public is being bombarded with conflicting claims about the costs and benefits of EU membership. Many of these are at best unsupported by evidence, and at worse simply untrue. Unsurprisingly, many people do not know what to believe or who to trust.

“This analyses provide some clarity for those confused by the competing claims and unsure which ‘facts’ to trust. With such a large decision to make, the British people deserve to be properly informed.”

Full Fact director, Will Moy, said: “Our mission is to cut through the rhetoric and arm people with the facts, by providing impartial, independent analysis. Whichever side they end up on, it is very important that they are able to access reliable information from an impartial source.”

The UK in a Changing Europe and Full Fact are keen for politicians, journalists and campaigners to present accurate information and facts concerning the UK’s relationship with the EU so voters can make an informed decision as possible when they cast their vote on Thursday 23 June.

Click on the link to read Leave/Remain: the facts behind the claims