Lessons for Andrew Bailey from previous Bank of England Governors 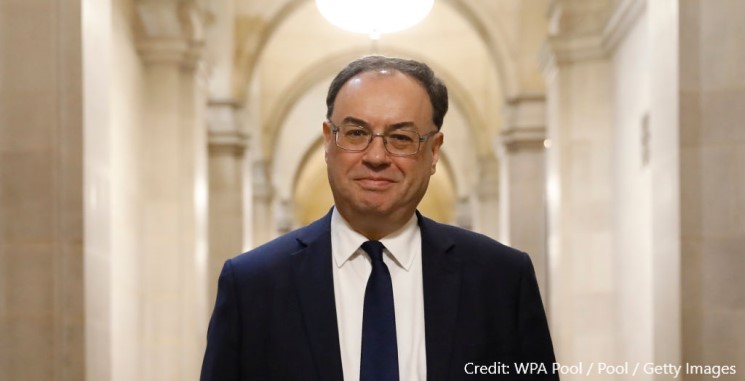 On 16 March 2020 a very important handover took place obscured amid the coronavirus coverage: Mark Carney came to the end of his term as Governor of the Bank of England, and was replaced by Andrew Bailey, a former Deputy Governor at the Bank and Chief Executive of the Financial Conduct Authority.

Carney got the job in July 2013, after navigating the Canadian economy through the 2007-8 financial crisis. Although he was the first foreigner to hold the position, this was not the first time that the Bank has been led by a self-identified City outsider: the Governor between 1973 and 1983 was Gordon Richardson, a former barrister who was almost 40 when he moved into finance.

The parallels between Carney and Richardson’s terms signal how the relationship between the Governor, the government and Europe will remain important during Bailey’s tenure. These have long shaped the development of financial markets in London.

Both Richardson and Carney grappled with the management of the money supply. Richardson was in charge when currency exchange controls were abolished by the Thatcher government in 1979. These were first implemented in 1939, and limited the amount of sterling British citizens could take out of the UK. The aim was to prevent a sudden outflow of capital in response to a decline in confidence in sterling.

Meanwhile, Carney faced important questions of how to manage money supply following the financial crisis, which triggered concerns about liquidity in the UK economy. In addition to reducing interest rates to then historic lows (these have subsequently been eclipsed by the 0.1% interest rate announced in March 2020), the Bank of England, in common with other central banks launched a programme of quantitative easing.

Under this scheme, the Bank purchased government bonds with the aim of stimulating the economy by increasing the money supply. However, concerns have been raised regarding the extent to which this money left banks and circulated within the ‘real’ economy as well as the uneven impacts on different groups of society

Beyond the management of the money supply, both Carney and Richardson were in post during the two referendums held in the UK concerning membership of the European Union (or Community, as it was in Richardson’s time) – although the outcomes were clearly different.

It is these two threads – the role of the Governor in macroeconomic policy making, and the question of Europe – which characterise Carney’s legacy, and so shape the tenure of his successor.

In 1997, Gordon Brown gave the Bank of England the ability to set interest rates independently, where previously the Governor had taken direction from the Chancellor. This was an important piece of optics, intended to signal New Labour’s economic credibility by de-politicising a key macroeconomic tool – but it was also noisily opposed by elements of the Conservative Party.

Following this reform, rates were set by the nine person Monetary Policy Committee (MPC), chaired by the Governor. For around 15 years this was how it worked: monthly announcements would be issued along with technical analyses of the state of the economy.

However, in 2013, under Carney’s leadership, the MPC began to take a slightly different approach, adopting a rhetorical style that would – in the eyes of his critics – start to undermine his credibility. The announcements came with indications that rate rises would not be considered until unemployment fell to 7%.

This ‘forward guidance’ was intended to reassure the economy that borrowing costs would not rise unless some certain conditions were met, in turn enabling the recovery to take hold.

Sensible as this sounds, it caused consternation at the time since the Bank of England was not meant to be in the business of giving contingent, subjective information – it was meant to play a technocratic role, and stick to objective facts.

Carney soon ran into trouble when unemployment fell but rates did not duly rise – and he had to clarify that the guidance was “not a promise.” Indeed, the Bank was likened to an ‘unreliable boyfriend’ in 2014 when MPs argued that it had provided mixed messages regarding the timing of possible future interest rate rises.

The events around the EU referendum further revealed how despite independence, financial and monetary policy remains closely entwined with politics.

Carney experienced this first hand. In May 2016, one month before the referendum, he warned that a vote to leave the EU “could have material economic effects – on the exchange rate, on demand and on the economy’s supply potential”.

His comments were greeted critically by supporters of the leave vote who argued that he shouldn’t make what were interpreted as politicised statements about the (arguably unknowable) economic impacts of leaving the EU. Carney countered that the Bank had a duty to explain ‘major risks’ contained within its economic forecasts.

And criticisms of his apparently hawkish stance on Brexit continued after the referendum result. Whilst the initial forecast in August 2016 was unduly pessimistic – as the chart below shows – cumulatively, the Bank’s forecasts under Carney have not been widely dissimilar to the experience of the economy in terms of longer term trends. 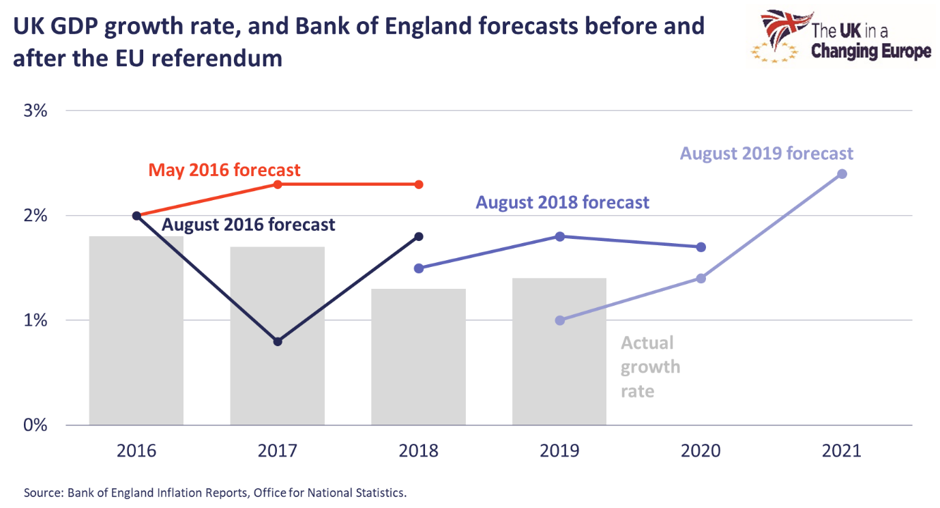 As Carney left the bank, the economic fallout from coronavirus was beginning to pose the largest challenge to the UK economy since at least the 2007-8 financial crisis. Clearly the forecasts for economic growth in 2020 and 2021 shown above now look inaccurate.

But the themes that characterised both Carney’s and Richardson’s terms as Governor remain prescient for the incoming Governor. Managing the money supply and, in particular, ensuring that finance flows from the banking sector to the ‘real economy’ is a prime concern.

This is reflected in a letter authored by Rishi Sunak, Bailey, and the interim CEO of the Financial Conduct Authority Chris Woolard, that urged banks and building societies to ensure that the potential benefits of emergency policies aimed at protecting small businesses in particular ‘are passed through to businesses and consumers’.

And the coronavirus economic contraction now forms the backdrop against which the UK’s new trading relationship with the EU needs to be negotiated before the end of the transition period, currently scheduled for the end of 2020. In this context, Bailey will have to navigate a tricky balance.

On the one hand, continuing with his predecessor’s approach, of providing both narrative and numbers in Bank forecasting, does not appear to sit easily alongside the Johnson government’s seeming desire to centralise economic policy around Number 10 (as suggested by the circumstances of Sajid Javid’s resignation).

However, if Bailey follows a more technocratic and pliant approach to the role, questions may be asked about the extent to which the Bank of England is independent from the government at a time when close scrutiny of macroeconomic policy making will be more important than ever.