Let us face the future: a brief history of Labour’s ideological warfare 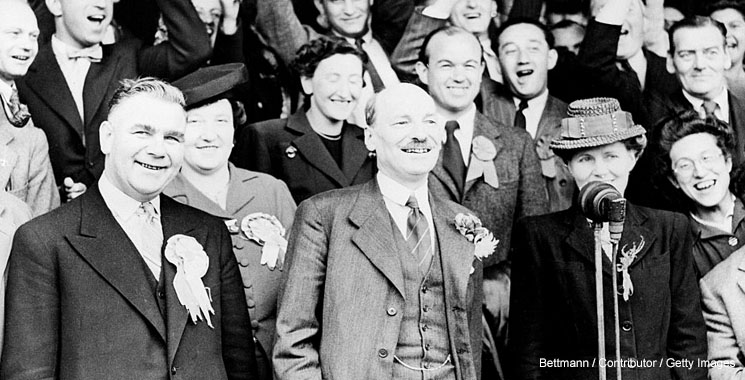 It may not seem like a time for celebration, but Labour Party members might be raising a glass because July 2020 marks the 75th anniversary of Clement Attlee’s landslide election victory, and the heralding of the welfare state.

The 1945 election was won on a banner of nationalisation aimed at tackling the post-war public’s ‘five giants’ − disease, want, squalor, ignorance and idleness − articulated in Labour’s manifesto, Let us face the future.

The challenges Labour took on show remarkable parallels with the crisis Britain currently faces − a need for solidarity, collective action, and state intervention.

Yet the ability of today’s Labour Party to offer solutions to the eerily similar circumstances Britain faces and win a landslide akin to Attlee’s rests on resolving its ideological tension, always extant but front and centre since Brexit, between nationalism and internationalism.

Labour’s staggering win in 1945 came as a surprise to both sides of the House. Churchill, the beloved war hero, and his Conservative Party were hugely popular, but his combative and assertive character, while good for wartime appeared ill-suited for peacetime politics.

Labour’s first majority government came to be the pinnacle government for many on the Left. Attlee’s win in 1945 ushered in a new way of life in British society with the creation of the welfare state. It was without doubt the most radical, reforming Labour government ever.

Delivering on the influential and highly popular Beveridge report, Labour’s reforms were designed to tackle the five giants, and to take care of the British people ‘from the cradle to the grave’.

A new protectionist governance was formed and with it the infamous post-war consensus which underpinned British politics for over 20 years.

The NHS and the welfare state were at the heart of the reforms becoming a symbol of national pride, and one that continues to resonate today; would Brits partake in a weekly clap for anything else?

The extensive welfare created by the post-war Labour government remains with us today.

Enacted over six years, the crowning point was the founding of the NHS in 1948, but it was more ambitious and included unemployment benefits, a nationwide housing programme, major reforms to education and nationalisation of services.

For many in the Labour Party it remains the most triumphant government in Britain’s history.

But the peacetime government was never a peaceful party. Labour was and remains a party rife with infighting, ideologically caught between the two prisms of nationalism and internationalism.

Following the Attlee administration’s demise in 1951, the post-war consensus emerged. Labour were successful again under Harold Wilson and James Callaghan in the 1960s and ‘70s, but conflict over key issues was brewing, a conflict which has never been resolved.

Post-war Labour was grounded in ideas of redistribution, nationalisation of services and industry and trade unionism; the party was configured as a mass party, representing the working class people of Britain and economically committed to Keynesian ideas.

Branded the ‘loony left’ by some, Labour was, at the very least, sympathetic of socialism. Factions of the Party, especially on the Left were deeply eurosceptic and opposed Britain’s membership of the European Community. And fundamental divisions within the Party emerged over key issues of state intervention, fiscal policy and welfare.

Later, during the wilderness years in opposition, the Party’s infighting on these key issues came to the forefront with the socialist, protectionist and nationalist bent – which after all won the landslide victory – winning out in the Party’s leadership and in turn ideological vision.

Yet this did not pay off in the voting booth in 1983, with Michael Foot’s so-called ‘longest suicide note in history’ cementing an end to the commitment to nationalisation, and some would say an end to the socialist tenets of the Party.

The second landslide for Labour came in 1997 and changed everything. But the party that came to power was a very different beast from previous Labour governments.

Abandoning a protectionist vision of nationalisation, Labour accommodated, many would say embraced, Thatcherite ideas of privatisation, deregulation, a minimal state and internationalism.

Cue ‘New’ Labour and the third way, described by guru Anthony Giddens as ‘a political approach that sought to reconcile economic competitiveness with social protection’. Britain’s out-dated and insular approach was, according to Blair, untenable.

Obsessed with globalisation in all its guises, Blair contended there is no alternative to globalisation, ‘you might as well debate whether autumn should follow summer’. For Blair, Britain was to be liberal economically and therefore open internationally.

The 2010 defeat and opposition years since has bared witness to a painful soul-searching process. As Roy Hattersley put it ‘the party not only failed to set out a clear and coherent idea of what it proposed to do. It was not even sure about the purpose of its existence’.

Then came what was to be a paradigm shifting moment in 2016 when Britain voted to leave the European Union. Labour’s leader Corbyn, elected on a banner of kinder, socialist politics walked the tightrope on the thorny question of Brexit; protectionist by instinct but aware of his Party’s split electoral base.

But Corbyn’s halfway between internationalism and nationalism never hit the mark with voters en masse.

Labour’s soul-searching continues, then, but Labour’s newest leader Starmer is very different from his predecessor and the world has fundamentally changed amidst the global pandemic. New cleavages have emerged, new challenges abound.

But plus ça change: the Covid-19 crisis has again pushed the question of the role of the state and indeed Attlee’s welfare state back to the fore.

And Brexit and a potential crash out in December force the question of where Britain sees itself on the geopolitical stage.

Labour will need to have answers to these calls for both nationalisation and internationalism respectively, a dilemma and ideological contradiction at the heart of the Party which has never been resolved.