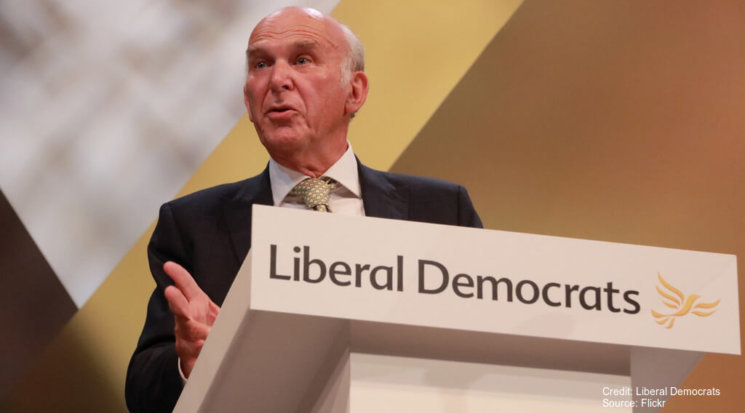 It reads like a classified ad: “We are a centre-ground, pro-European, liberal and social democratic party, welcoming like-minded supporters.” This was the Liberal Democrat leader Vince Cable’s recent pitch for supporters, and it reveals something telling about the Lib Dems.

They are not a party of the ‘moderate centre’, as many believe. The inclusion ‘social democratic’ in Cable’s description – not surprising given his Labour origins – points to a party undoubtedly leaning left.

Research by the Mile End Institute emphasises this point structurally: both Lib Dem members and voters place themselves and the party to the left of centre. It is, therefore, more accurate to think of the party as being ‘soft Labour’ rather than equidistant between the two main parties.

Take austerity, the defining issue before Brexit spoiled the party. According to the same research, 98% of Labour members think it has gone too far, compared with just 11% of Conservatives. For the Lib Dems, the figure is 75%—much closer to the Labour tally.

There are also clues to the Lib Dems’ DNA in the party membership numbers. The party leadership have made much of a recent surge in membership as being part of a resistance to Brexit, the party’s flagship policy.

But this surge actually coincided with the rise of Jeremy Corbyn and preceded Brexit. It is likely that part of this surge was attracting Labour defectors put off by Corbyn—­centre-left churn, in other words, not a Brexit call-to-arms.

The trouble is, the centre-left is crowded electoral territory. There’s not just Labour, but the Greens, the SNP in Scotland and Plaid Cymru in Wales. And, collectively, they would seem to have an electoral advantage.

At the last general election, they polled 16.9 million votes. The right, on the other hand, is a more barren landscape in which the Conservatives are now the only show in town. But even with UKIP votes included, they got just 14.2 million.

There were 48 seats at the last election where Labour and the Lib Dems potentially cannibalised each other’s vote, and the Conservatives won 36 of these.

In Scotland, centre-left votes – SNP, Lib Dem and Labour – would overcome all but one of the Conservatives’ 13 seats.

Given the tight results of recent elections, this overcrowding has become decisive.

There ought, in theory, to be space in the centre for a party that can pick off voters on both the left and right. The crucial question is how strongly voters are attached to their party allegiances to make this feasible.

British Social Attitudes survey data suggest this attachment is increasing, which is bad news for the Lib Dems, a party with whom just 6% of the population identifies. By contrast, some 39% identify with Labour and 30% with the Conservatives. The Lib Dems need political adulterers at a time when voters are becoming ever more faithful.

A new political party would suffer from precisely the same problems. There is probably more space for a right-leaning centrist party, akin to Ciudadanos in Spain, which takes a hard line on rule of law issues but has a prominent social justice agenda.

Theresa May’s pre-election popularity, espousing precisely this kind of agenda, is evidence of the gains available on this political territory.

The problem is that the prominent cast of characters that seem to be involved in talks around a new party are predominantly centre-left—Labour defectors and Lib Dem figures—just as with the SDP in the ‘80s.

Such a party would simply increase the competition among centre-left parties, dispersing the vote more thinly—a fatal move in a first-past-the-post system.

This leaves the Lib Dems with a few options. They could go ahead and merge with defectors from elsewhere to form a new party; this might increase their support a bit above 10%, but it would not lead to a majority-winning party.

As others have argued, a new party wouldn’t have to win a majority to have a big impact – UKIP after all didn’t get anywhere near and shifted its priority issue to the top of the political agenda by influencing the two main parties.

But this is much easier with a single issue, and took the best part of two decades.

Another alternative is to reform from within. It remains true that the party doesn’t need to win a majority to have influence, particularly if it can gain enough support to play a decisive role in government formation. To maximise these opportunities, though, there is much more space available towards the centre-right.

Of course, a move in that direction could alienate some supporters, and the party’s chastening coalition experience has been read by many as an example of the errors of leaning right. But a rebalancing that took them away from Labour’s shadow would certainly help.

Perhaps the most important thing, though, is to have a distinct political message. If Labour’s focus under Corbyn is going to be social justice and economic regeneration, and the Conservatives’ is—unavoidably—enacting Brexit, then the Lib Dems have to find virgin territory.

But their message can be radical even if their policies are ‘moderate’, and it was precisely this kind of ‘change’ message that helped Justin Trudeau to victory in Canada.

They need to offer not just a change of policy but a change of culture, just as Corbyn does and as Barack Obama did in the US before him.

As Obama said: “We are looking for more than just a change of party in the White House. We’re looking to fundamentally change the status quo in Washington.”

What both the Trudeau and Obama—and arguably Corbyn—examples show, though, is that the party needs a rebrand under a new, charismatic leader to deliver this message.