This blog looks at the question of whether Keir Starmer is managing to keep the left united, with the focus on the City of Bristol.

Why did we choose Bristol?

We chose the City of Bristol because its demographics and past voting behaviour made it a prime target for both the Greens and Lib Dems to win votes from the Labour Party.

Bristol’s electorate is significantly more liberal than average, voted by a ratio of almost 2:1 for Remain in 2016, and made up of a large number of students and graduates (concentrated in certain parts of the city).

Under Jeremy Corbyn, Labour had significant success with such voters, reflected in the substantial boost to Labour’s vote share across the Bristol’s four parliamentary constituencies in 2017 and largely upheld in 2019.

The local authority is thus an interesting test case of whether – in trying appealing to voters who abandoned Labour in recent years – Keir Starmer is at risk of losing votes on his ‘left flank’ to the Greens and Lib Dems, especially as both those parties have historically performed strongly in parts of the city. 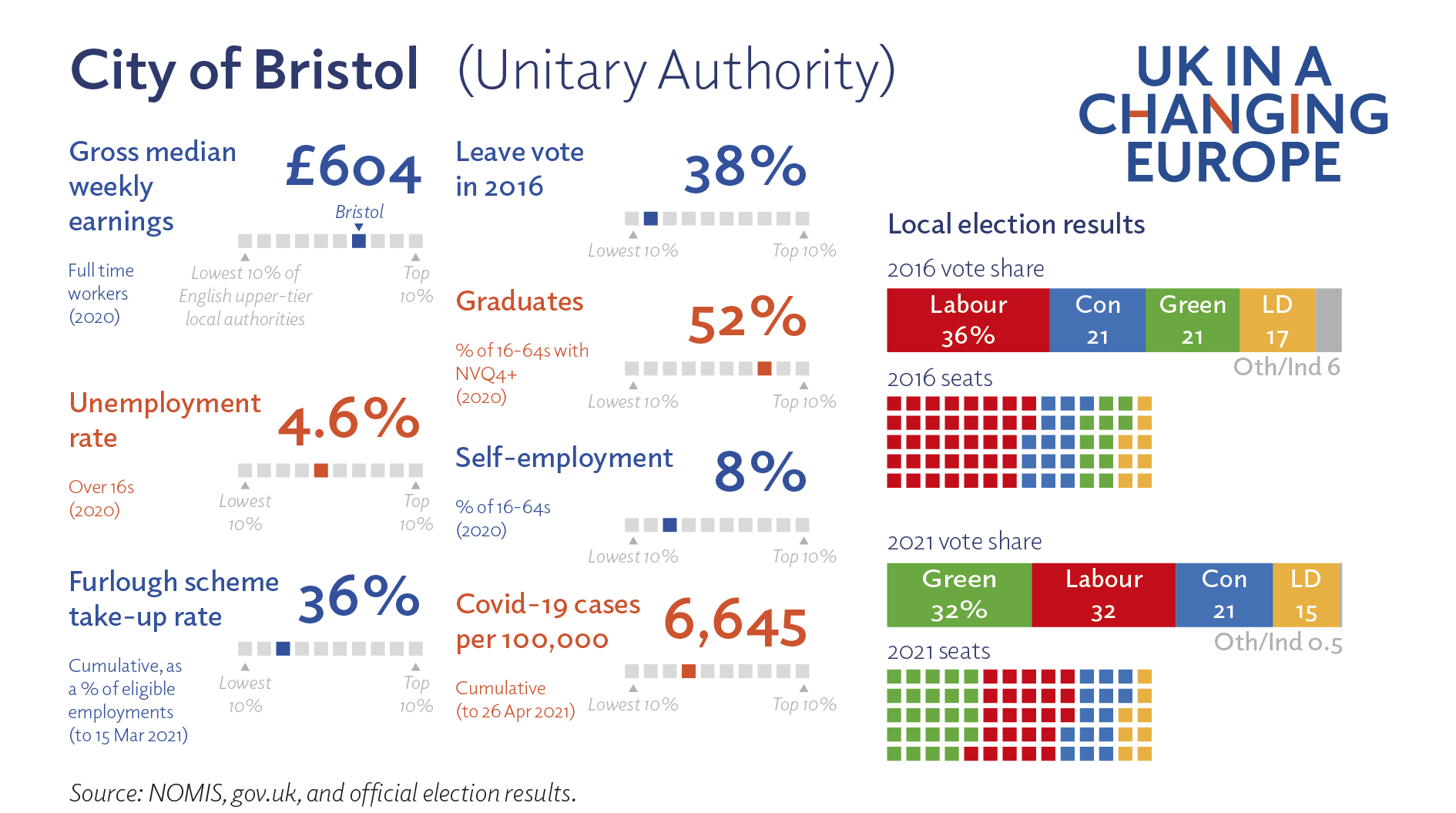 The Green surge materialised. When Bristol City council elections were last held in 2016, Labour won 37 of the 70 available seats, with the Conservatives on 14, the Greens on 11 and the Lib Dems on 8.

The Greens have now gained 13 seats from Labour, leaving them as the joint-largest parties on the council, with 24 seats each.

The core of Green gains came across the city’s relatively affluent central belt, and what is notable is that this is not a simple story of systematic shifts in vote from red to green.

The ward of Lockleaze, where the Greens’ vote share rose by 24 points, did see the transfer come almost entirely from Labour, whose vote fell by 21 points.

Yet in the affluent ward of Clifton, the Greens’ 18-point increase came largely at the expense of the Conservatives, who fell 15 points. And in the Central ward, the Lib Dems fell 10 points and the Conservatives 6, as the Greens rose by 19.

Labour’s stronghold remains in the west of the City. And the party also enjoyed a better performance in the contest for the Mayor of Bristol, where its candidate Marvin Rees was re-elected, beating his Green opponent by 56% to 44% in the run-off.

A close second was in itself a coup for the Greens, who took 7% of first round votes in 2016, while Rees saw a slight dent in his total of 63% of second round votes in 2016. However, the Bristol Mayoral race was significantly changed this year by the absence of independent candidate George Ferguson (Mayor of Bristol from 2012-16, and runner up 2016), which makes it much harder to contextualise within the national political picture.

The Lib Dems were more successful than the Greens in eating into Labour and Conservative votes in the south of city, where they have traditionally enjoyed the most success. But they failed to make inroads elsewhere.

While Bristol saw the most prominent ‘green surge’, the party enjoyed similar, if slightly less explosive, success in other parts of the country with significant student populations.

In Sheffield, Labour lost control of the city council, thanks in no small part to gains for the Greens. 29 seats were in play – a third of the council total – and overall Labour lost eight seats, while the Greens gained five and the Lib Dems three.

The Greens’ gains came in the centre of the City, taking five wards from Labour, often with very strong shifts (up over 25 points in Hillsborough and Gleadless Valley). As with Bristol, votes were not taken from Labour alone – in three of the five constituencies gained by the Greens, it was the Lib Dems who saw the biggest fall in vote share.

This translated into a very good set of elections for the Greens, as they made significant gains nationwide, almost doubling their number of councillors from 88 to 151 across the 143 councils in play.

And notably, these were not all in the urban, student-dominated heartlands of Corbyn’s Labour party. A glance at this map shows dashes of Green council spotted across the country, often in rural wards gained at the Conservatives’ expense. Consider the 39-point increase in Halesworth in Suffolk, which saw the Greens snatch the council from the Conservatives, or the 40-point surge in Tonbridge in Kent.

Oxfordshire, Suffolk, East Sussex and Gloucestershire – all areas where the Lib Dems typically expect to make gains – stand out as regions where the Greens did particularly well.

Given the myriad other items on his list of concerns, the performance of the Green Party last week is not likely to be causing Keir Starmer too much distress just now. Yet the Green surge is significant, and could cause a real headache for Labour at the next general election.

This is not, however, because of the risk of the Greens gaining seats at Labour’s expense.

The Greens’ success in Bristol came in a very localised set of elections, where one to two thousand votes was enough to secure a council seat. In the Bristol Mayoral race and London Assembly elections, the Greens still saw big surges in support, but these were diluted by the larger and more diverse electorates they were competing in, ultimately translating into just one single extra London Assembly member.

Gains at a general election will be even harder, given the increased prominence given to national considerations, and the first past the post system which makes a vote for a smaller party much less attractive. At this point in time, we could perhaps expect a serious, direct Green challenge to Labour in only a handful of constituencies.

But the Greens could cause Labour serious problems if they start taking votes away from them in key target seats.

The Green surge is not simply caused by Labour haemorrhaging voters on its left flank. The shift in dynamic in Bristol clearly comes from the Greens sweeping up a mixture of (presumably quite liberally-minded) Labour, Lib Dem and Conservative voters across the city’s more affluent neighbourhoods.

Keir Starmer knows he needs to win seats in what has been called ‘affluent Remainia’ (think Surrey, Hertfordshire, Cambridgeshire) if Labour is to do well at the next General Election.

The evidence from Bristol and elsewhere suggests the Greens are becoming a serious proposition for the type of socially liberally, economically moderate voter who inhabits these areas, and we know that climate and environment concerns rank increasingly highly among Britons. The more these voters are attracted to the Greens, the harder it is for Labour to win such seats from the Conservatives.

For the Greens themselves, however, the local election results show they are making significant progress. Sustained momentum – and an ability to harness the narratives of post-pandemic politics, targeted at the types of voters they are winning over now – could see them supplant the Lib Dems as England’s third-biggest party.