This blog looks at the question of whether there are signs the Liberal Democrats could recover in their old ‘heartlands’, with the focus on Cornwall.

Why did we choose Cornwall?

A key tension for the Liberal Democrats is the extent to which their focus should be on winning over ‘affluent remain’ voters, or trying to rebuild in the places in which they had electoral strength in 2005 and 2010. The key challenge being that the latter areas are often more leave-leaning, and places where the party previously won because of their local appeal.

Cornwall is a prime example, where the party’s success has been linked to its ability to tap into the relative nonconformist ethos of the county and its long-held penchant for backing independent council candidates.

The party had previously performed well in Cornwall at general elections, yet in recent years this support has collapsed, with every Cornish seat returning a Conservative MP at the three general elections since 2015.

However, the Lib Dems’ performance at the 2017 local elections offered some hope. The party came second to the Conservatives with 30% of the vote, suggesting all might not be lost for them in the region.

The 2021 elections where thus a test of whether the Liberal Democrat identity in the region could be further reanimated, and how voters – in an area with a major fishing industry where 57% voted to leave the EU – would respond to the government’s Brexit deal and its implications for fishing. 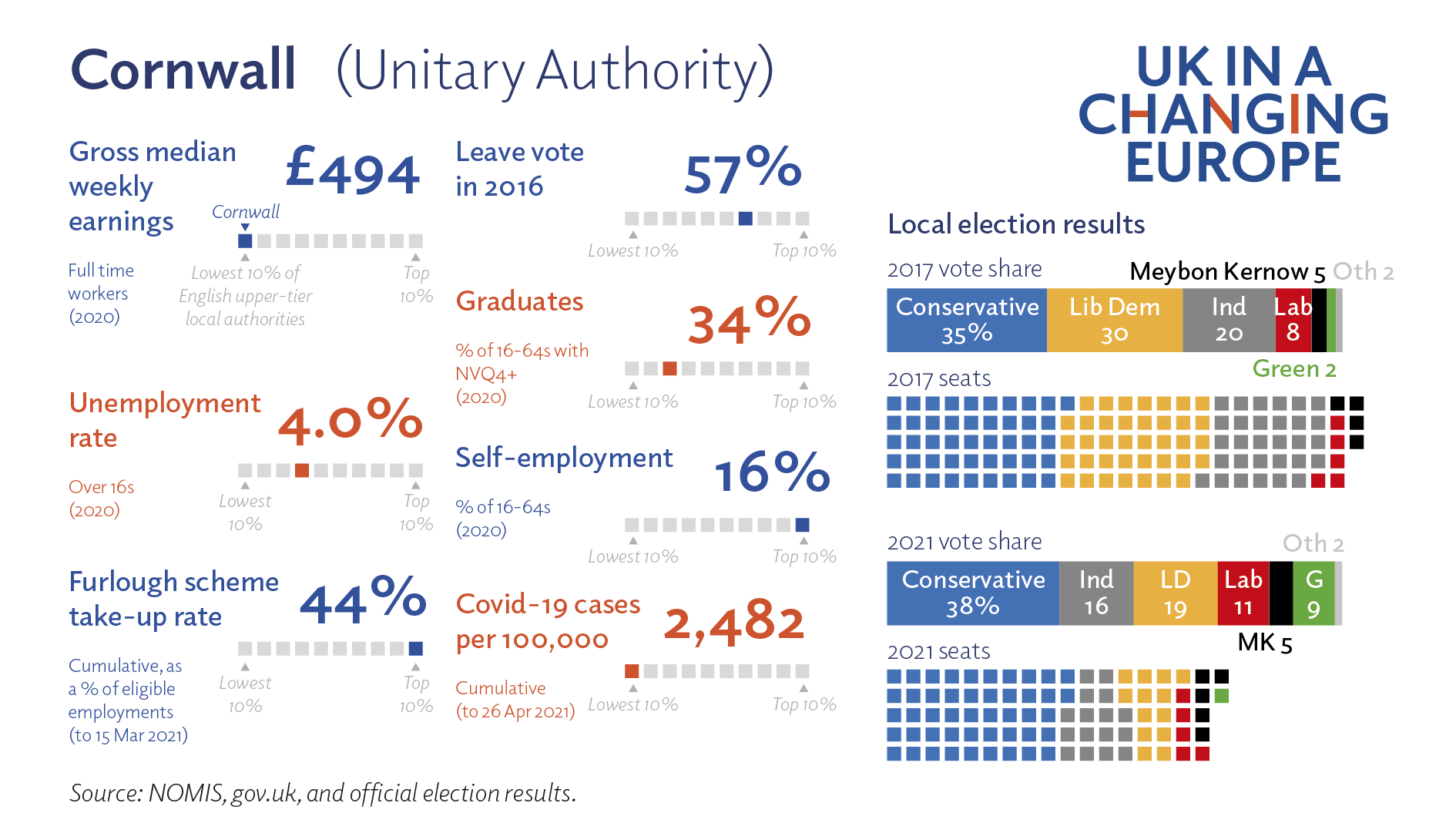 Boundary changes and a reduction in the number of seats mean we can’t directly compare seats won between 2017 and 2021, but the Lib Dems’ share of Council seats fell even more sharply than their overall vote: from 30% of seats after the 2017 election, to 15% after Thursday.

The Conservatives, by contrast, consolidated their position, increasing their vote share slightly from 35% to 37%. A very effective distribution of their vote across seats also means they now have a majority on the council with 54% of seats, compared to 37% in 2017. This is the first time the council has ever been under Conservative control.

The results also suggest that the Conservatives could make further gains in the future. They were the closest opposition in 12 of the 13 seats which the Lib Dems won. In two of the seats they were within 2-3 percentage points of victory, and in another five seats the margin of victory was between 9 and 12 points.

The Lib Dems do not look poised to win back too many seats. Although they were second in 22 councils – all but two of which were won by the Conservatives – the average gap to first place was 20 points. There were three very marginal seats (lost by 3, 7 and 54 votes), but only one other was lost by less than 11 points.

We should not, however, read this as a simple story of voters leaving the Lib Dems for the Conservatives. After all, the Conservatives only increased their vote share by 2 points. Rather, the Lib Dem vote seems to have splintered into other parties.

The Greens appear the notable beneficiaries, seeing their share of the vote more than quadruple from 2% to 9%, also winning their first seat on the Council. This replicates trends seen across England of the Greens picking up a selection of rural seats and growing their vote share overall. Labour also did reasonably well, increasing their vote share from 7% to 10% – while independents’ vote share fell back slightly, from 19% to 17%.

The South West of England has long been sui generis, with relatively strong Lib Dem support a historic artefact. Yet the region is not a homogenous bloc. While the Lib Dem result in Cornwall was a significant setback, in Devon the party – while nowhere near returning to their previous strength – at the very least held their own and made gains in Barnstable South, Dawlish, Teignmouth and South Brent to become the official opposition.

The difference between Devon and Cornwall in part lies in the relative strength of feeling around Brexit. It is also worth noting that the Lib Dems’ success lay largely in suburbs around Exeter. This is a version of the success of the party’s ‘orange halo’ effect in other areas across England experiencing overspill of younger graduates from London.

All of which is to say that the South West’s politics ­– driven by demographics and geography – are beginning to behave a lot more like the rest of England.

The results in Cornwall throw into question the very idea of a Lib Dem heartland. Notions of winning back traditional seats by tapping into an essential nonconformism, baked into the earth of certain English regions, appear nothing but misty-eyed nostalgia.

Instead, last week’s results suggest that the Lib Dems have a better chance of winning back some previous areas of strength than others, with the key factor being demographic trends rather than historic ties.

The Lib Dems thus look further away from Cornwall than ever. If they are to win back ‘heartlands’, these are to be the ones found in more affluent parts of the country, with higher levels of qualifications and support for EU membership.

This poses longer term challenges for the party, as a surging Green Party – whose vote share increased by more than the Lib Dems, even in many councils the Lib Dems gained – threatens to pick away at their vote here. Likewise, Keir Starmer will have his eyes on those voters abandoning the Conservatives, and in the longer term a future Conservative leader could even pivot back onto this terrain.

The space in the political landscape for Liberal Democrat votes is looking thinner, and increasingly heavily contested.