Here, we analyse Hertfordshire – an area of ‘affluent Remainia’ which elected Conservatives in 10 out of is 11 constituencies at the last election, despite some heavy swings away from the party. Was the challenge faced by the Conservative Party in these areas in December 2019 a high tide for ‘pro-Remain’ parties, or the makings of a long-term problem for Boris Johnson?

Why did we choose Hertfordshire? 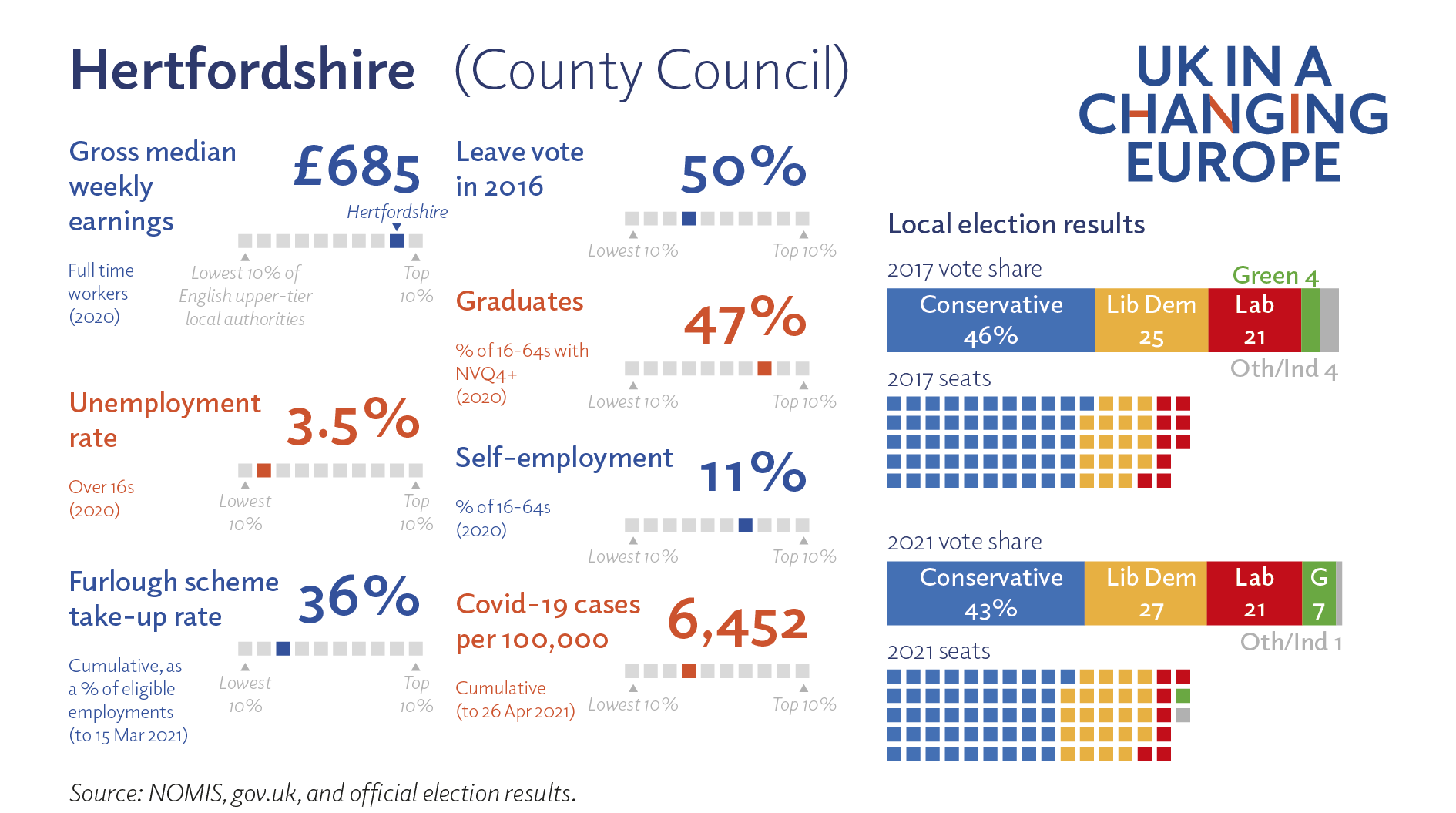 Hertfordshire is a classic part of ‘affluent Remainia’: pro-Remain, relatively affluent areas which Boris Johnson largely successfully defended from the Liberal Democrats in December 2019 (with the exception of St Albans). This was achieved while making gains in different parts of the country where the Conservatives have traditionally done less well. Yet these types of areas are where Boris Johnson’s Conservatives are now most vulnerable – particularly to the Liberal Democrats, but also Labour if it can coral the social liberal vote.

The Conservatives retained control of Hertfordshire County Council, but lost five seats, leaving them with 46 out of 78 seats. The Lib Dems made moderate gains, up four seats to 23, to entrench their position as Hertfordshire’s second party. The Greens gained a seat on the Council, while Labour fell back one to 7 seats.

Looking deeper at the results and the seats that did change hands, it is clear that the Liberal Democrats are advancing in areas of Hertfordshire where they are strongest. In places such as Hitchin and Harpenden, strong showings in the 2019 general election have been built on in these local contests, indicating the way in which the party’s voter base has changed in the post-Brexit period. A 13.5% swing in Harpenden North East saw defeat for the Conservatives’ leader on the council by 41 votes, from a 1,000 deficit in 2017.

While Hertfordshire did not change hands, these warning signs for the Conservative Party turned into the reality of losing control: in Oxfordshire, Cambridgeshire and Tunbridge Wells, the Conservative Party lost their overall council majorities despite the generally buoyant national picture, due mainly to Liberal Democrat gains.

The story of last Thursday was Labour stasis rather than advance in marginal places where the demographics – a higher number of under 40s, graduates and social liberal voters – are broadly on their side. However, there were some key exceptions in places like Falmouth in the South West and Shoreham and Worthing – where Labour gains demonstrated that the Conservatives are losing relative ground.

The success on Saturday evening in the Cambridgeshire and Peterborough mayoral election, with Labour winning 75% of Liberal Democrat transfers, both demonstrated the problem and the opportunity for Labour and the Liberal Democrats: in many places they are able to absorb second preferences from each other. This will not be helpful in future mayoral contests conducted under first past the post or, perhaps more pertinently, in Westminster elections.

The results demonstrated that the demographic problem we identified for the Conservative Party is real.

It is likely we will continue to hear more about the ‘blue wall’ – the structural, defensive problem faced by a Conservative Party that deemphasises economic investment in the south, and advocates authoritarianism while being in power in relatively liberal places.

However, the rising tide of government popularity sunk most progressive boats in this election, and the long-term shifts in demographics in places like Hertfordshire are important but glacial.

Whether a ten-point lead – and a divided opposition – is something the Conservative can continue to rely on will determine whether these results have significant implications for the future of politics in England. If the government’s lead falls, and opposition parties can find a route to, then a significant chunk of Hertfordshire’s 10 Conservative MPs could start to feel the pressure.