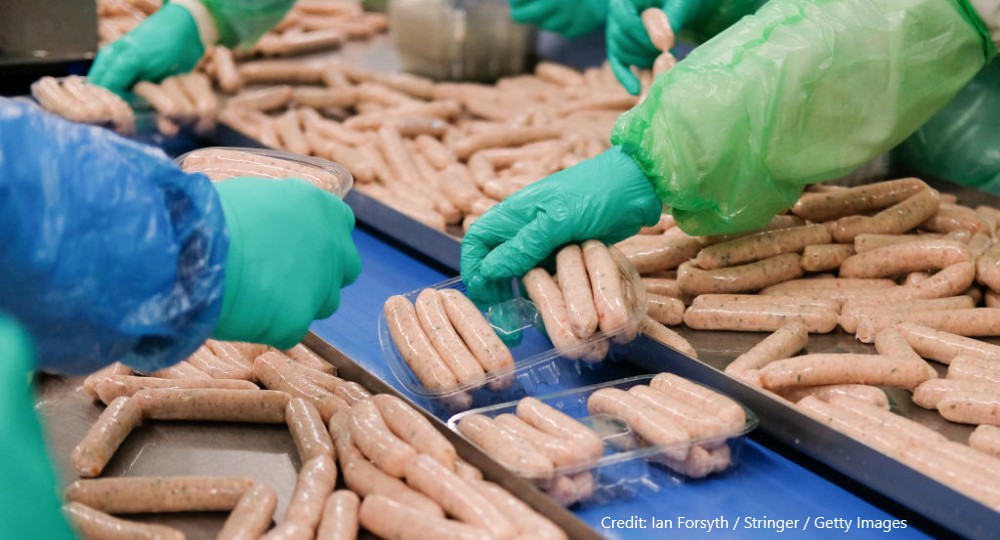 Recent outbreaks of Covid 19 in different food processing factories in the East of England – Bernard Matthews, Cranswick Foods and Banham Poultry – have shone a light on the conditions of those working in these factories.

The reality of this work is long working hours and shift patterns. Many of the factories operate shift work outside of ‘normal’ working hours (e.g. 6am-2pm or 2pm-10pm), and many of their workers are EU nationals.

Across the UK, about a quarter of EU-born workers have jobs involving some kind of shift work, compared to 17% of the UK born. These employment opportunities are largely located in mostly rural, more isolated areas.

Banham Poultry which saw a Covid-19 outbreak in August this year, is based on the outskirts of the market town of Attleborough in Norfolk.

Many workers live in the nearby towns such as Great Yarmouth and Thetford where accommodation is cheaper, many in houses of multiple occupancy (HMOs), renting a room to keep costs down.

The rural location of the factory means for workers living in Great Yarmouth, for example, there’s a one-hour trip each way to travel to work. Some factories lay on buses for staff on these shifts and charge the workers £7 per day as travel expenses.

If this is not an option, some staff will car-share or try to find other ways to travel to work – as public transport is often not an option because of the rural locations of these factories and the timings of the shifts.

For those working in farms the problems are different. Farm workers we visited in Cornwall last year lived in disused holiday caravans on the farm site, and there are sometimes as many as 50-60 caravans in one space. Each worker was placed in a shared room in a caravan: three rooms per caravan means six people living in each.

Workers on some farms were not allowed to have their own transport, as farmers said there simply wasn’t space to allow workers to park cars due to the sheer number of people living in caravans on site, sometimes into the hundreds.

Some farms arranged transport once per week for workers to visit the local town to purchase their essentials. The isolation of this work is intense.

Some families we met with last year had lived in caravans on site for 14 years already. One farm had small children living in the caravan, children whom the parents had to walk to the nearest school some distance away.

Many workers also work through an agency and many work on zero-hour contracts. The ONS Labour Force Survey estimated that there will be up to 1 million agency workers in the UK by 2020. We know that migrant workers are also more likely to be in these non-permanent jobs (8%) than the UK born (5%).

The TUC consider all agency workers vulnerable in the UK labour market due to their employment status and their lack of tenure or notice rights. During the first national Covid-19 lockdown we spoke to EU national agency workers in factories who told us they were unable to say no to shifts – despite any health risks – as to do so would mean they would not be offered any further hours.

Yes, I have been asked to work on weekends and managers really insist that we do. There are more orders and we are expected to work at a faster pace than usual. As I work for work agency our work coordinators do insist we need to come to work. People are worried to say no as this might mean that there will be no more hours offered (Lithuanian national, poultry factory).

Covid-19 has exposed the working conditions and employment models in factories and farms around the country. Those who are already here will be allowed to apply for settled or pre-settled status and continue to work, but as and when they leave, the UK will no longer have a migration route for those in low paid labour.

This is because January 2020 will see the end of EU free movement to the UK and the new Immigration Bill will introduce a points-based immigration system whereby individuals will need a job offer at an appropriate skill level, meeting a £25,600 salary threshold, and knowledge of English to move to the UK.

These new requirements will rule out many of the migrant workers working in low paid jobs around the country to future migration to the UK.

In fact, a recent report by the IPPR found in total around 69 per cent of EU migrants currently working in the UK would be ineligible for a skilled work visa if the future immigration rules were to apply to them. This is because, based on their occupation and earnings, they would not have enough points to secure a skilled work visa.

The full time equivalent (FTE) of the national minimum wage is approximately £17,000 per year, so a total of £8,600 per year less than the new threshold. In fact, outside of London and other major cities, a working FTE salary of £25,600 plus would equate, in reality, to many jobs falling outside the applicable skilled worker visa threshold.

So will British people step in and fill the gap? The experience of last summer’s call for a ‘land army’ to help on farms during the summer was not promising. Many British workers reported that the employment model of, for example, living on a farm, just wasn’t a realistic option for them.

This raises the question as to why current working conditions are acceptable for migrant workers but not for ‘local’ people? And what will it mean for employers when the now usual workforce flow of employees from across the EU is closed at the end of this year and replaced only by an out of reach highly skilled visa instead?

By Professor Catherine Barnard, senior fellow at UK in a Changing Europe and Fiona Costello, research associate, University of Cambridge.