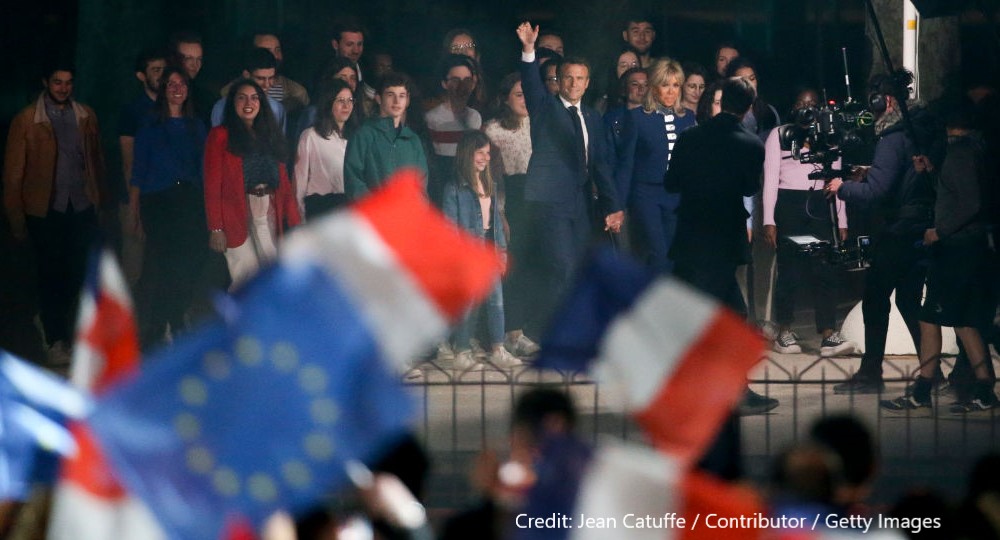 On Sunday 24 April, the French voted for Emmanuel Macron’s re-election as President for another five-year term. Macron won this re-election with a much larger margin than predicted, receiving 58.55% of the ballots, while his opponent Marine Le Pen received 41.46%. He is the first sitting president to win a re-election in 20 years, but with the election strongly marked by apparent disenchantment with politics, what do the results tell us about the state of French politics?

This election marks the continued and vertiginous decline of the two traditional dominant parties, the left wing Parti Socialiste (PS) and the centre-right Les Républicains (LR) (and its various previous incarnations), which had tended to dominate the second round since the 1960s. This decline was already noticeable in the 2017 elections, which saw the PS and LR receive 6.36% and 20.01% respectively in the first round, behind Le Pen’s Front National (FN) (21.30%) and Macron’s La République en Marche! (LREM) (24.01%).

The 2022 election suggests even more radical voter-dealignment, with neither the PS nor LR achieving the 5% vote share necessary to claim back election expenses (1.8% and 4.8% respectively) coupled with an increasingly squeezed centre, with voters choosing from a growing number of options on the far-right and far-left.

The high level of abstentions and spoiled ballots suggest a mix of electoral discontentment with politics and strong electoral polarisation. As in 2017, one of the reasons why Emmanuel Macron succeeded in being elected was that a majority of French voters still deem Marine Le Pen to be beyond the pale and a significant number therefore voted to block her from power.

Interestingly, the same phenomenon also seems to have aided Le Pen herself this time as she became the figurehead for an anti-Macron vote (most spectacularly demonstrated by the results in the French overseas territories).

The discussion between the two rounds of voting focused on who could win over the 22% of the electorate that had supported left-wing candidate Jean-Luc Mélenchon in the first round.

Voting intention polls reveal the extent to which this key demographic was split in the run-off, with responses indicating that only 33% of Mélenchon supporters were intending to transfer their vote to Macron, compared to 66% opting instead to abstain or cast a null ballot – suggesting that for the latter voters, Marine Le Pen and her far right Rassemblement National (RN) party were deemed no more unpalatable or a threat than the possibility of Macron being re-elected.

Overall, turnout was low. At just under 72%, this figure represents the lowest in a presidential run-off since 1969 and the second lowest since presidents became directly elected in 1965. Macron’s share of the vote in terms of those registered to do so was actually just 38.52%.

Indeed, the number of voters who showed up at the polling station but opted to vote for neither option was also considerable, with over 8.6% of the electorate opting to return blank or spoiled ballots compared to an average of 4.3% in elections between 1965 and 2012.

Nevertheless, this remains three percentage points lower than in the previous election, perhaps suggesting a slightly stronger tendency for those who had supported other parties in the first round to use their ballot to keep the far-right out of office.

Solidifying support for the far right

The results also show considerable support for the far-right. Where previous elections had seen this vote dominated by the RN (previously the FN), the 2022 contest also featured Reconquête, a new far-right party created to support the candidacy of pundit and relative political outsider Éric Zemmour who received 7% in the first round.

Together, the RN and Reconquête received 30% of the vote (just over 10.6 million ballots) representing 22% of registered voters. Despite losing out on the presidency, Marine Le Pen celebrated her results as a ‘sensational victory’ for her party, having received a total of 13.2 million votes on Sunday, up from 10.6 million in the second round in 2017.

The increased support for Marine Le Pen and her party may be owed to the decade of work she has put in to making the party more respectable (and electable) after taking over from her father in 2011.

Moreover, the party and she as a candidate appear to have learned from the 2017 election, which had also pitted Le Pen against Macron in the second round, in which there was a general consensus that Le Pen had come across as more vitriolic and less solid in her policy positions than her adversary.

This year the RN ran visibly different campaigns for the first and the second round. Le Pen lurched noticeably rightward in her discourse as she headed into the run-off, to court the nearly 2.5 million voters who had supported Zemmour.

Zemmour had acted as a ‘lightning rod’ in the first round, occupying traditional far-right platforms on issues such as nationality and immigration, allowing Le Pen to campaign on less strongly politically branded issues, chiefly the rising cost of living.

She was then required to pivot ahead of the second round to recapture this far-right electorate, for example reaffirming her desire to ban headscarves in public places for Muslim women during the televised debate – an issue she had avoided discussing frontally in the first round.

The ‘Third Round’: looking forward to the June legislative elections

The Presidential election has determined who will lead France for the next five years – with the announcement of the next Prime Minister imminent – but only the upcoming legislative elections in June will establish the make-up of the National Assembly with which the Executive will have to work. Work on campaigns and coalition negotiations has already started ahead of this crucial vote which is being treated by all parties as a ‘third round’.

Macron’s previous presidency has demonstrated his and LREM’s ability to bring together a broad coalition of political actors and he has declared himself committed to ‘reuniting’ France’s politically fractured society post-re-election.

By Emily St. Denny and Timothy Peace. Emily is Assistant Professor in Public Policy at the University of Copenhagen and convenor of the Political Studies Association French Politics Network. Timothy is Lecturer in Politics at the University of Glasgow and is currently working on the Rassemblement National in power in French local government.