In his keynote address at a conference on Brexit and public opinion 2019, Sir John Curtice quite rightly underlined the point that Remainers and Leavers are strongly polarised on issues concerning the future relationship between the UK and the EU.

In this context he also suggested that there was little or no support for any one solution to this problem as, like Parliament, there was no clear majority of the British public in favour of one solution or another.

The facts from the various public opinion surveys Sir John cited suggest that he was right, and in the following discussion he pointed out that even in Northern Ireland more than 50 per cent of Unionists voted ‘yes’ for the Belfast Agreement back in 1998.

True again: and this gives us a route to a solution to the Brexit conundrum which starts by recognising that both Northern Ireland and Brexit UK are both deeply divided societies.

Back in the ‘90s, I worked on the negotiations which led to the Belfast Agreement, and we were searching for a compromise to which Unionists, Nationalists, Protestants and Catholics could all agree.

We had to get all these groups to the compromise point from a position where support for that compromise in their respective communities was not 50 per cent, but closer to 10 per cent. Critically, if we had used Sir John’s methods for analysing public opinion in Northern Ireland we would never have got to peace!

Sir John cited the results of a poll commissioned by the Change Britain campaign and completed by BMG. In this study eight options were tested, ranging from leaving the EU on a Canada-style deal, to a Norway-style deal, the government’s withdrawal agreement, to a second referendum, with informants being asked to select their most preferred option.

With so many options on offer it is difficult to get above 50 per cent for any one option and, most importantly, we do not know what informants’ second and third choices might be. This means we can’t tell where a compromise could be found between Leavers and Remainers, or between Conservative and Labour party supporters.

As a tool for conflict resolution analysis this blunt survey methodology is seriously flawed, as it highlights differences without identifying common ground.

When we did a similar exercise in Northern Ireland, and tested eight options for the resolution of the conflict against public opinion, only 11 per cent of Protestants and 10 per cent of Catholics accepted the power sharing idea that would eventually become the Belfast Agreement.

For Protestants, remaining in the UK without sharing power with Catholics was their number one choice at 49 per cent, but it was also the last/eighth choice for Catholics at 57 per cent (see table). So power sharing was the way forward. 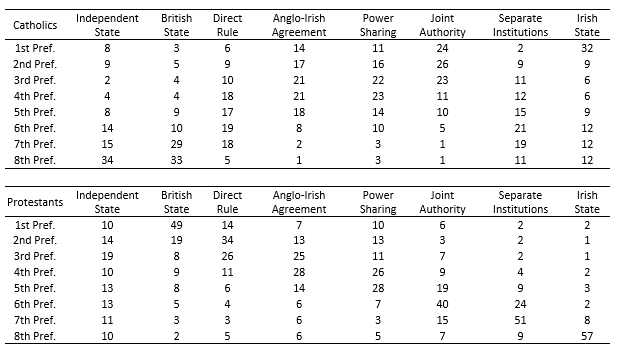 But in the real negotiations of the Belfast Agreement we had to deal with literally hundreds of issues and test them against public opinion to help the negotiators come to a compromise, and it simply is not possible to rank order hundreds of options.

So we came up with a qualitative scale that would achieve the same result for each and every item. The negotiators wanted to know what their publics considered to be ‘essential’, ‘desirable’, ‘acceptable’, ‘tolerable’ or ‘definitely unacceptable’, and when we used this five point scale the politicians could see exactly what each side needed in an agreement and what they would never agree to.

A settlement of the Northern Ireland problem was the result, with more than 50 per cent of Protestants voting ‘Yes’ for power sharing and the Belfast Agreement.

And here is my point: we can do exactly the same for Brexit to find out what Remainers and Leavers, as well as Conservative and Labour supporters, can compromise on to mend the divisions in the UK body politic. Click here to view a draft question and questionnaire to do just that.

The UK is taking on many of the characteristics of deeply divided societies found around the world.

This fact needs to be recognised and acted on by the political leadership. This recognition is not easy, indeed it is very difficult; but the research community can help by providing that leadership, and the public, with facts and analysis from conflict resolution best practice.

In this regard the polling methods used in Northern Ireland are best practice and should be used to analyse and resolve Brexit.

By Colin Irwin, senior honorary research fellow at the University of Liverpool.