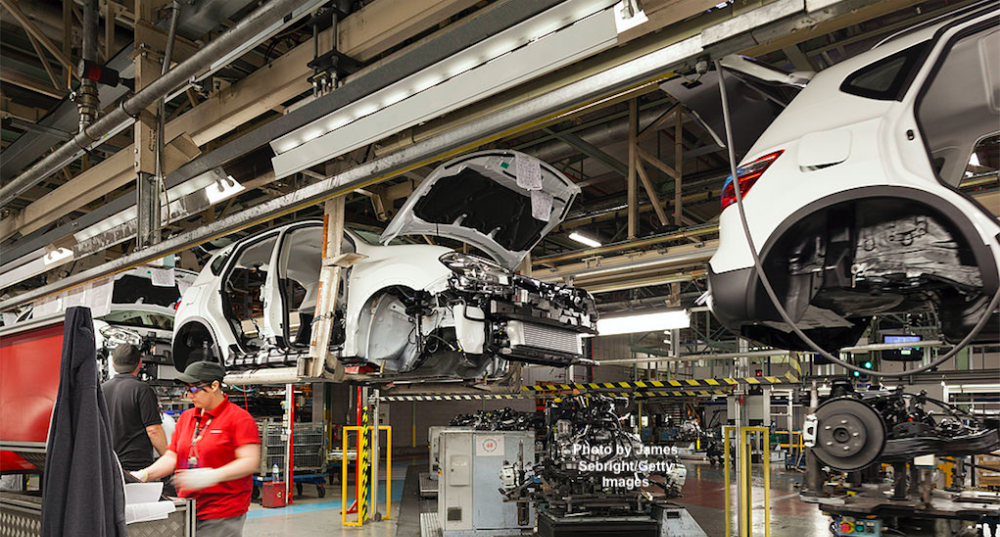 It has been a turbulent few years for UK manufacturing. Investment stalled in the wake of the 2016 referendum as major multinationals held off investing in the UK given uncertainty over the future trade relationship with the EU.

Taking automotive as an example, the last two years have been a rollercoaster, with firms like Jaguar Land Rover shedding thousands of jobs on the back a ‘triple whammy’ of declining sales in China, a massive shift away from diesels across Europe and Brexit uncertainty slowing the UK market and investment.

Similarly, Honda confirmed it would shut its Swindon plant and Ford its Bridgend plant. Meanwhile Nissan reversed its decisions to build models at Sunderland and Tesla invested in Germany rather than the UK, citing Brexit uncertainty. That was even before Covid-19.

When Covid-19 hit, manufacturers in sectors like automotive and aerospace pretty much shut down given a collapse in demand, supply chain disruption, and to keep workers safe. The aerospace maker Rolls Royce announced major job cuts as aerospace orders and servicing dried up.

As assemblers shut down, orders for component manufacturers dwindled and there was a cascade effect on the supply chain. The Government’s furlough scheme helped keep many workers in place, but gaps in financial support meant that many medium sized manufacturing firms struggled to access funding.

While larger manufacturers were able to build stocks and make plans to cushion themselves against possible post-Brexit disruption, many small and medium sized enterprises have not been able to do so and are now cash strapped.

Yet UK manufacturing growth picked up towards the end of 2020, partly boosted by economies reopening following lockdowns earlier in the year, along with a Brexit stockpiling effort. This was concentrated in manufacturing firms supplying other firms and in investment goods.

At the same time, consumer goods production remained weak owing to low levels of confidence and rising unemployment. And it’s not clear whether the sector’s upturn can be continued into 2021, once the temporary boost from Brexit stockpiling wares off.

The end of 2020 saw lorries snarled up in traffic jams at ports, in part because of efforts to stockpile goods and parts ahead of the end of year. The port of Calais and Eurotunnel struggled to cope with the flow of traffic and car-maker Honda had to suspend car production at its Swindon plant as its finely grained ‘just-in-time’ supply chain became stuck in the jam.

Where are we headed?

Manufacturing has welcomed the trade deal as it has avoided tariffs and quotas, subject to complying with Rules of Origin. It is hoped that the deal now gives a green light to major investments in the UK that had been stalled amidst Brexit uncertainty.

But — and this is a big but — this is still a thin deal with major implications and costs for UK manufacturing. There are many ways in which UK manufacturing is deeply intertwined with the EU through complex supply chains.

Customs checks, for example, are likely to introduce delays at the UK-EU border, adding to costs and disrupting tightly interwoven supply chains. Aerospace, pharmaceuticals and automotive will be especially affected, with aero and auto still recovering from the impact of Covid-19.

And despite Boris Johnson claiming that the deal ensures “no non-tariff barriers”, this is clearly not the case. Such barriers will be quite substantial. For instance, estimates of the additional costs for UK businesses of filling out import and export declarations range from £7.5 billion to £15 billion per year. And that’s before we get to complying with rules of origin rules.

And even with the trade deal, manufacturers will want clarity on a range of areas going forward. Think of data protection after Brexit, data sharing within the chemicals sector, and whether various UK regulatory agencies will be set up on time to take over work from their EU counterparts.

While the UK Government highlights possible regulatory divergence as a benefit of Brexit, industry sees it very much as a cost given that it has invested heavily in the complying with the current framework.

A specific chemicals Annex to the deal was short and failed to secure access for British firms and authorities to the REACH database, in turn suggesting duplication of work and a big bill (in the hundreds of millions of euros at least) in setting up the new UK regime.

Overall, UK manufacturing will welcome the deal in as far as it goes — after all a thin deal really is better than no deal for the sector. Nevertheless, the UK will still need to consider various industrial policy measures to both mitigate the negative impacts of Brexit and to support UK manufacturing.

This could include more collaborative working between government and industry; better integrating policies on skills, innovation and finance; bringing together support for specific technologies, sectors and places — in so doing transferring more power to the UK’s regions and devolved institutions; and in particular helping firms take advantage of new technologies that are part of what is termed ‘Industry 4.0’.

The latter highlights the need for much better training and retraining to reskill workers as manufacturing and the wider economy changes.

This would require something of a ‘policy reset’ moment by the UK Government, with a need to invest more into an industrial policy.

The bottom line is that the deal will still make trade with the EU more difficult, impacting negatively on UK manufacturing. A more supportive policy for manufacturing is likely to be needed going forward to help compensate manufacturing for some of the extra costs it will face.