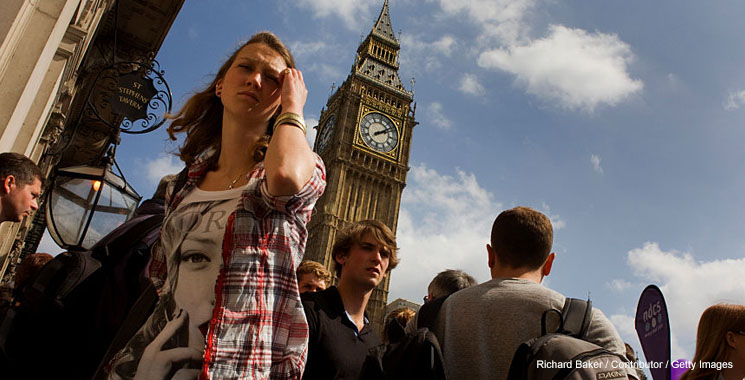 EU migrants usually arrive in the UK when young, to work or study. When we speak about ‘young Europeans’ in London, we imagine an Italian barista, a Romanian student, a French intern, or perhaps a Spanish nurse.

We tend to see young Europeans as a digitally literate group, speaking good English and quickly accessing information. We expect the vast majority to have an easy time applying for their new immigration status through the EU Settlement Scheme.

On the ground, young Europeans’ experiences are as diverse as any other group of migrants. A recent research report from the3million, the largest organisation representing EU migrants in the UK, showed that many young Europeans are, in fact, missing out on their rights.

Overall, young Europeans considered themselves unrepresented or underrepresented in UK politics. They felt they lacked adequate information about their rights in the UK.

Most young Europeans involved in the research were yet to apply to the EU Settlement Scheme – a few found out during the focus group that they must apply. While some were planning to apply soon, others wrongly thought they do not have to apply.

Some thought their worker or student status exempts them for applying, while others mislabelled the EU Settlement Scheme as only for those who are confident to stay in the UK long term.

I didn’t go too much onto this subject [EU Settlement Scheme] because it does not affect me. Yeah, I think is just going to affect people with benefits and they are going to make it a bit stricter. (Romanian Focus Group)

Others knew they must apply, but they were waiting to collect the necessary evidence; for example, a few were struggling to renew their expired ID documents. The application process became even more difficult with Covid-19, as many services, such as document renewals, have been closed for several weeks.

These findings on young Europeans’ patchy knowledge about the EU Settlement Scheme call for more outreach, even to communities that are not normally categorised as ‘vulnerable’. With application numbers at their lowest during Covid-19, the government should carefully think about those who will not be reached on time before the June 2021 application deadline.

Covid-19 also brings new complications for the over a third of EU citizens so far who have ‘pre-settled status’, or limited leave to remain for five years. Many EU citizens are currently supporting their families in other European countries.

They worry that these absences in the time of Covid-19, especially if longer than six months, will affect their right to ‘upgrade’ to settled status.

The research findings published by the3million on citizenship are more positive. Most young people consulted would consider naturalising as British citizens in the future, with some already in the process.

However, as in the case of the EU Settlement Scheme, there is confusion on this topic – both in terms of the process and the rights citizenship brings.

What is interesting and perhaps different from other migrant groups is that young Europeans almost exclusively consider becoming British for pragmatic reasons.

Identity plays a very small or inexistent role in the discussion. Some do not feel secure with settled status, while others mention the perceived practical benefits of British citizenship in the job market or in education.

The barriers to becoming British are also pragmatic – the most commonly discussed are the £1,330 application, fee and some countries’ restrictions on dual nationality.

I wouldn’t apply for a British passport because the Dutch one gives more rights, and you can travel to more countries. (Dutch Focus Group)

The positive attitudes of young Europeans towards British citizenship, even if motivated by pragmatic reasons, represent an opportunity for the UK government to rethink citizenship policies.

Reducing the citizenship fee to reflect the actual cost of processing an application (about a third of the current fee) and aligning settled status criteria to citizenship are just two ways to facilitate access to citizenship.

Appointments for the ‘Life in the UK’ test, English tests, biometrics appointments and document scanning centres have been inaccessible for months. Absences due to travel restrictions could make some fail the strict absence requirement for citizenship.

In addition to settlement and citizenship, the3million’s Rights and Representation research report made recommendations on political engagement.

Most young Europeans felt underrepresented, but also did not exercise their current political rights, such as voting in local elections. Most referred to not having the time and resources to be politically engaged or thinking their voice would not be taken seriously.

I had an opportunity to vote in the local elections, but I chose not to. I do not want to be voting for something I do not really know or care about. (Latvian Focus Group)

There was little awareness of the role of local governments and scepticism on whether their voices could have a meaningful impact locally.

They felt that the national Westminster elections or referendums, in which they cannot vote, are the elections that matter. With EU migrants’ existing local voting rights currently being negotiated bilaterally, an unequal situation where some EU migrants can vote, but not others, is about to happen.

The picture from this research report is very different from the positive EU Settlement Scheme press releases. It shows the complicated context behind the large application numbers from EU citizens.

The research took place before Covid-19. The impact of the pandemic is making it even more difficult for young Europeans to secure their status and feel safe in their homes.

But it is not too late to reflect on the stories behind the numbers. There is still time for those in power to make the policy changes needed to ensure migrants’ rights are protected.

By Alexandra Bulat, PhD researcher at University College London and the Young Europeans Project Manager at the3million. She is the author of the Rights and Representation the3million report, which you can read in full here (with an accompanying briefing paper here).