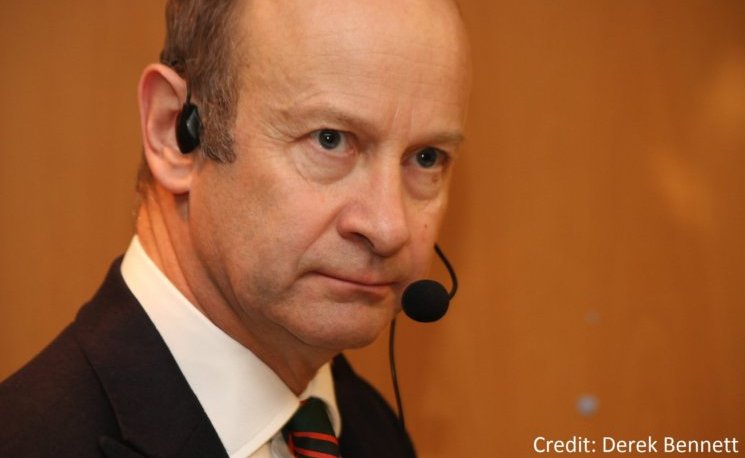 While now seen by some as a ‘political honey bee’ ­– that is to say, dying from its own sting – Ukip’s emergence from the fringes to the political mainstream has been undeniably transformative for the shape of British politics.

One particularly notable aspect of their ascension was the party’s ability to challenge Labour in the industrial towns of northern England –  a looming spectre in what were once Labour’s heartlands.

In both academic and wider political spheres, this has largely been attributed to Ukip’s appeal to the ‘left-behind’ voters, a substantial constituency of poorer socioeconomic groups and those who espouse traditional values who had been all but abandoned by the liberal consensus in domestic and international politics.

Put simply, Labour’s apparent need to compete for middle-class professionals sparked a trade-off with their traditional support bases, leaving a vacuum assumed by the anti-elite rhetoric of the Paul Nuttall wing of Ukip.

According to this theory, success for Ukip in the north lay in areas with a substantial population of white, lower class, less educated voters with manual occupations: the key characteristics of the ‘left-behind’.

Whilst this argument, rightly, has a great number of proponents, it still needs to be challenged. Mapping Ukip’s vote share in the 2015 local elections in the north west and south Yorkshire against class, education and occupation – shown below – demonstrates its imperfections.

Though all three show that the pattern holds a great deal of truth, the large degree of variance in Ukip votes at high levels of the three variables begs a question left unanswered by current theories: why had some of those ‘left-behind’ embarked on this great Ukip rebellion while others remained loyal to Labour? 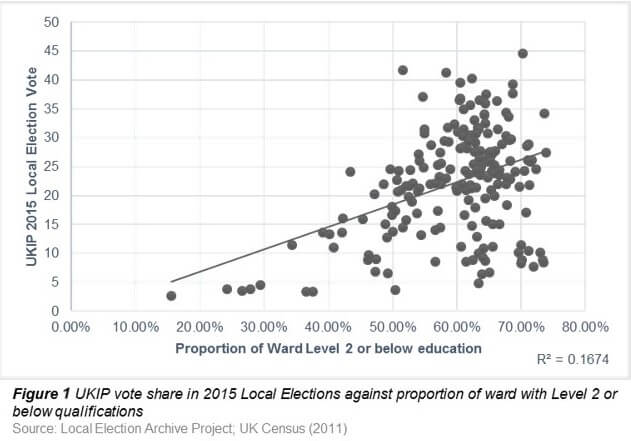 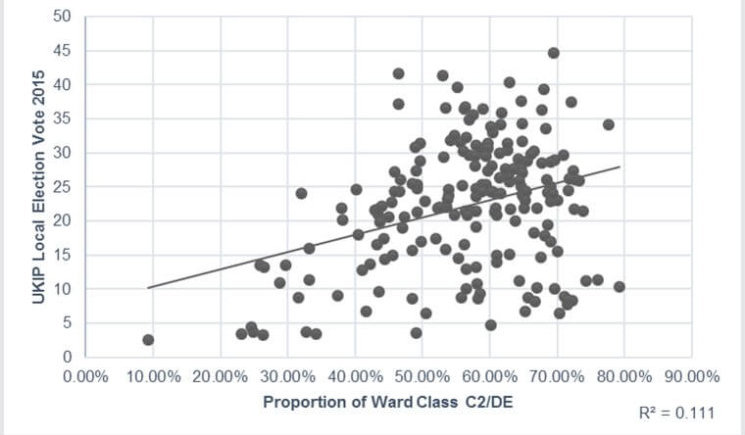 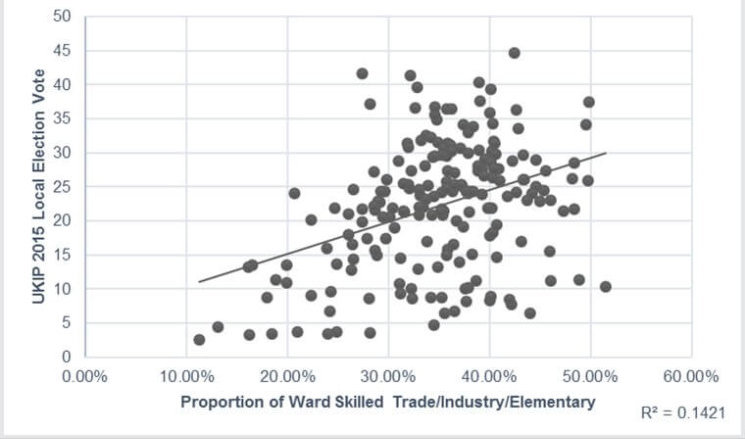 One way to approach this gap in our knowledge would be to include a consideration of geography in these theories.  Such an emphasis on the role of place is particularly valuable as council wards with the strongest levels of the three variables – class, education and occupation – tended to coalesce at a similar level of vote share to others in that council, as shown in the figure below.

This suggests there is value in investigating whether there is something particular about Oldham, for instance, which gives the ‘left-behind’ hypothesis more weight than in Liverpool.

The first striking result of bringing place into the debate is the clear cleavage between towns and cities in the region. The major cities in the regions of interest, namely Manchester and Liverpool, holding for class, ethnicity, education and occupation, were far less likely to have defected to Ukip than in the periphery towns surrounding them.

This divergence in political cultures between city and town is one which is being found repeatedly across recent elections. In the EU referendum, Manchester, Liverpool and their wealthier suburbs, were the only voting areas in the region to opt for Remain, whilst a report by the New Economics Forums found that swings to Labour from the Conservatives in last June’s General Election were twice as large in cities than in large towns. 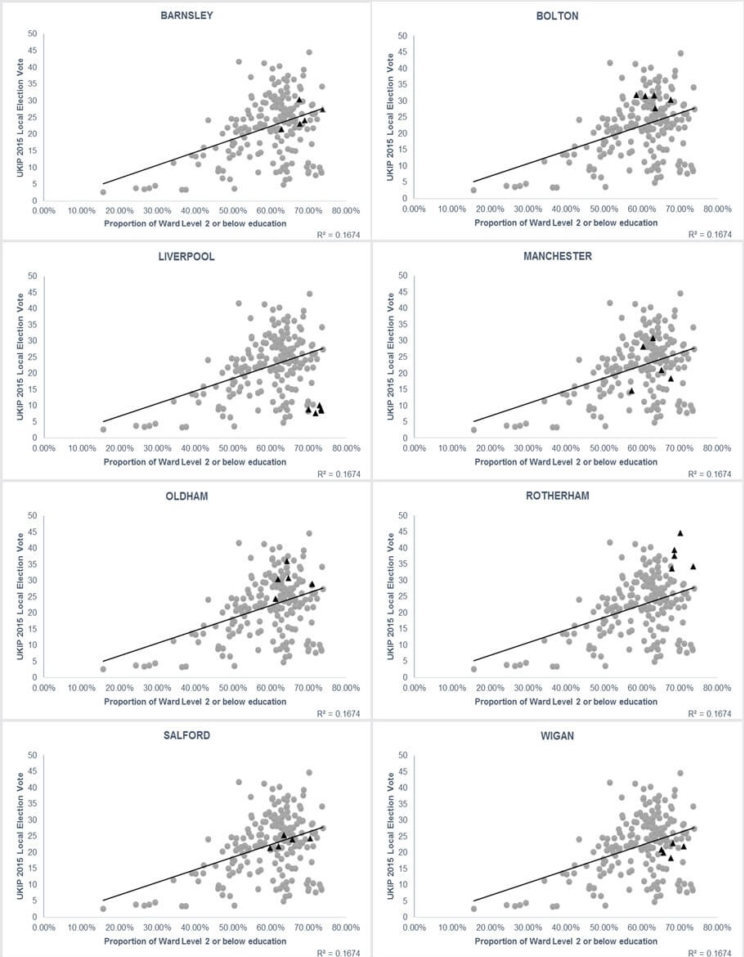 Interviews with local activists helped to elucidate how the local factors are driving this divide, with many pointing to the stark difference in economic investment between the two cities and their peripheries, as well as the differing histories of immigration between the two.

However, geography and local contexts can be seen to tell us more about the varying levels of Ukip/Labour contestation than just the city/town divide. For one, an intra-city split can be observed within Manchester, where wards with high levels of ‘left-behind’ structural characteristics in the south voted for Ukip in significantly lower numbers than those in the north of the city.

Once again, economic geography was repeatedly mentioned in interviews, with participants explaining how investment was not only concentrated in the city to the detriment of the periphery towns, it has also been concentrated in the south of Manchester. By being proximate to economic growth, wards in the south were less vulnerable to populist appeals.

As well as this potential intra-city dynamic, local context can be placed at the centre of explanations of variance between towns in the region. While some of these contextual factors were extremely specific – the child sexual exploitation scandal in Rotherham, for instance, obviously had a profound impact on Ukip’s successes in the town in a way that is not the case beyond the town’s boundaries ­– others were found to be important across multiple councils, including the degree of competition the local Labour party had faced in recent years.

In towns with exceedingly high levels of Ukip support, local Labour activists pointed to their recent monopoly breeding complacency and inaction in the local machinery making them ill-equipped to deal with the Ukip threat.

While the full picture of these local contexts is not drawn out from this preliminary study, the examples given here show the strong potential contextual factors can have in helping to explain the variance found in the earlier models.

These findings, then, suggest that improvements in the ‘left-behind’ theory lie partially in an engagement with place and context. While Ukip in 2018 are not the electoral threat they were in 2015, the clear value in considering geography here suggests a similar approach may improve how we model public opinion elsewhere.

A broader, albeit more tentative, conclusion from these findings, is that the need to consider local geographies indicates that we are witnessing the localisation of political competition in the UK, where public opinion is driven increasingly by the local than by national campaigns or structural characteristics.

While further research is required, exploring other aspects of party competition in Britain, to properly support this suggestion, it is at least clear that our current approach to electoral geography is outdated and insufficient. We can no longer rely on certain regions, such as the north west, and their constituent towns and cities, to vote in a uniform manner.

Local contexts now play a much more authoritative role, meaning that each town responds to the same pressures and phenomenon, such as the rise of Ukip, in a very un-uniform manner.

By Jack Glynn, Researcher at The UK in a Changing Europe.