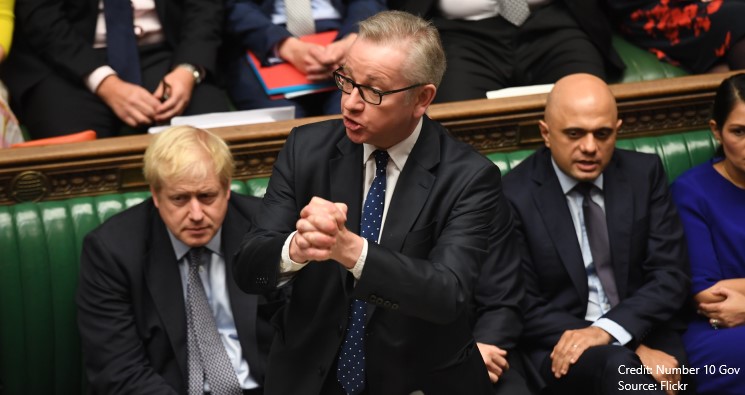 On 24th January 2017, then Brexit secretary David Davis was on his feet in the Commons explaining the government’s ambition for trade after Brexit: what it wanted was “a comprehensive free trade agreement and a comprehensive customs agreement that will deliver the exact same benefits as we have, but also enable my right hon. friend the secretary of state for international trade to go and form trade deals with the rest of the world, which is the real upside of leaving the European Union.”

Three years later, a speech by Chancellor of the Duchy of Lancaster Michael Gove has shown the government has given up on half that ambition. Yes, it is keen on a raft of free trade deals with non-EU countries. But the government now accepts that comes at a price—of massive bureaucracy at the border.

At a public event organised by its Border Delivery Group, Gove warned businesses that they have ten and a half months to be ready for paperwork, checks and controls on both sides of the border. “The UK will be outside the single market and outside the customs union, so we will have to be ready for the customs procedures and regulatory checks that will inevitably follow.”

In fact, all he was doing was making clear what has been evident ever since Boris Johnson took the helm in the summer—that a “Canada-style” free trade agreement would come with “Canada-style” border checks.

Only one problem: whereas Canada is over 3,000 miles away from mainland Europe and does not rely on cross-border supply chains to fill supermarket shelves, or load car or airplane parts onto roll-on-roll-off ferries, UK businesses do.

When Theresa May was confronted with the consequences of seeking a distant deal with the EU, she chose alignment through her Chequers proposal. Johnson has opted instead for autonomy.

We have, of course, been part of the way here before.

Last year, the government repeatedly warned of the need to get ready for Brexit—then a no-deal Brexit. What yesterday finally made clear is that from the point of view of border processes, the Johnson deal may deliver zero tariffs, but otherwise looks very like no deal—but for life, not just for Halloween.

In fact, that understates how much extra work and potential delays business will face. The government’s no-deal plans were based on the principle of prioritising flow over revenue. There would have been minimal checks at the UK border—as far as possible, EU certificates would have been accepted and goods waved through.

That risked an asymmetric border: there was little evidence that EU officials would have been similarly accommodating. And it was clearly an unsustainable solution. The big news from Gove was that the UK intends to apply the full range of controls coming into the UK too.

That may just be a negotiating tactic to give the EU an incentive to agree as many “facilitations” as possible—but business cannot rely on that. It means an urgent search for (non-existent) wannabe customs agents to help businesses comply on both sides of the border.

Of course, this will mean costs, force some firms to adapt their processes, and may simply force others out of business. It is, at a stroke, the biggest imposition of red tape a government has ever inflicted on business (and nothing in Sajid Javid’s reported Red Tape Challenge will be able to offset the costs).

Down the line, technology may smooth the flow at the border—but it is nowhere near ready yet to be deployed. And despite last year’s warnings, the National Audit Office found in October that only 150,000 of the potentially 250,000 businesses affected had registered for new customs processes.

It is this friction that led UK in a Changing Europe to conclude that Johnson’s deal would have a much more severe impact on the economy than the May approach—reducing GDP growth by up to 7 per cent per capita after 10 years.

Of course, there is one border where none of this will apply. The land border between Northern Ireland and the Republic is protected by the now legally-binding protocol.

But the effect of the government’s approach is to deepen the border it has to put down the Irish Sea, in order to allow Great Britain to diverge from European rules. Any remaining idea the prime minister had that his future deal would remove the need for checks between GB and NI can—as he might put it—be thrown in the bin.

By Jill Rutter, senior fellow at The UK in a Changing Europe. This piece was originally published by Prospect Magazine.