Migrants, benefits and the UK’s renegotiation: questions and answers 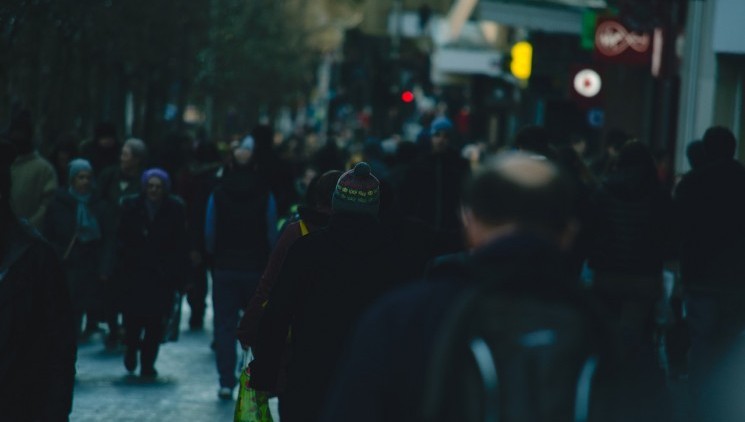 Today (November 10), for the first time, the Prime Minister set out in writing, in a letter to Donald Tusk, the President of the European Council,  his proposals for EU “reform”. He said:

But we need to go further to reduce the numbers coming here.  As I have said previously, we can reduce the flow of people from within the EU by reducing the draw that our welfare system can exert across Europe.  So we have proposed that people coming to Britain from within Europe must live here and contribute for four years before they qualify for in-work benefits or social housing. And that we should end the practice of sending child benefit overseas.

Is our welfare system a “draw”? What are the facts? Are his proposals realistic? And what impact would they have?

What benefits can migrants claim?

Most non-EU migrants can’t claim benefits until they are permanently settled here, which takes some years, because the conditions under which they’re given entry (as workers, students, or family) don’t permit them (there are special rules for asylum seekers and refugees). But migrants from the EU can mostly claim benefits on the same basis as a UK citizen, except that if they are not in work they can normally not claim Jobseeker’s Allowance (JSA) or child benefits in the first three months they are in the country.  They have the same rights to in-work benefits, like tax credits, as UK citizens. And, like UK citizens, if they are resident here but their children are resident abroad, they can, in certain circumstances, claim child benefit.

And what benefits do they actually claim?

Looking at benefits for people out of work, migrants from both within and outside the EU are less likely to claim benefits than UK nationals. DWP statistics show that as of February 2015, just over 5 million people were claiming welfare benefits; of those, about 370,000 (7.2 per cent) were non-UK nationals (at the time that they registered for a National Insurance number; and of those, only 114,000 (2.2 percent of the total) were EU nationals.  Since those born abroad make up 16 percent of the working age population, and those born in the EU make up about 6 percent, it can be seen that migrants of both types are considerably less likely to claim out-of-work benefits.

This is hardly surprising. As noted above, non-EU migrants mostly can’t claim benefits, and in any case have come here to work or study: those who do settle, and acquire the right to claim, probably claim in roughly similar proportions to natives. EU migrants come here overwhelmingly to work – in fact their employment rates are considerably higher than for either natives or non-EU migrants. When they do claim, they generally claim JSA, which suggests that they’ve either been in work, are looking for work, or both.

So what’s the problem?

Tax credits (and housing benefits for those in work).  Here the numbers look very different. Migrants make up 16 percent of the tax credit caseload, so roughly proportional to their representation in the population, with EU migrants accounting for 7 percent. Moreover, if we look at only EU migrants claiming in-work tax credits and child tax credits – probably the most “expensive” group – this proportion goes up to about 1 in 10 (and, since EU migrants frequently live in the private rented sector, many will also be claiming housing benefit.). This is why the Prime Minister is focusing on in-work benefits. 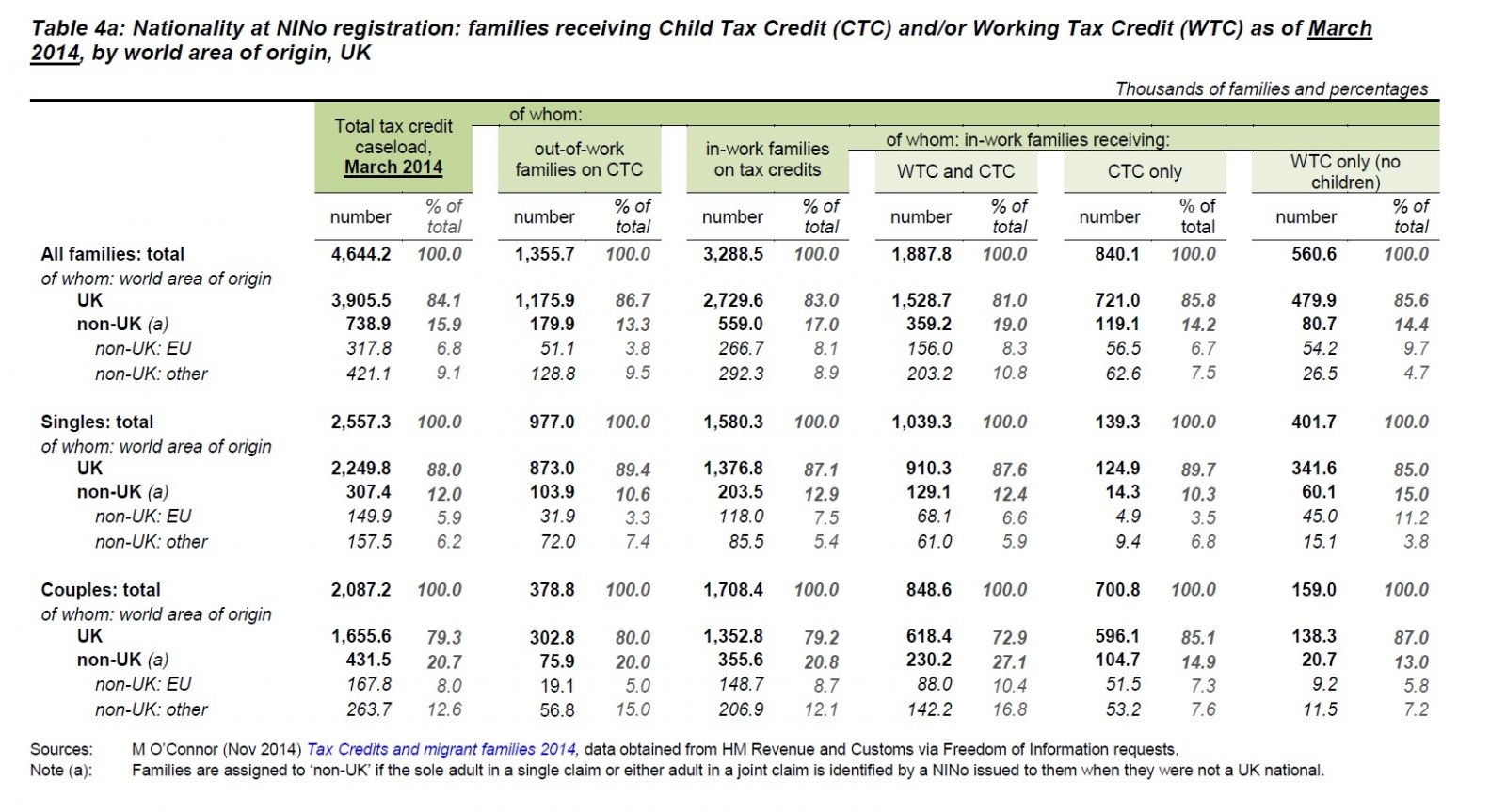 Is this a problem? Is it unfair?

From an economic point of view, it is not obvious that this is a major problem. People who are in work, even in low-paid jobs, are after all contributing to the economy in a variety of ways; most analysis suggests that EU migrants, overall, improve the fiscal position, both in the short and (more importantly) in the long run.

But “fairness” is a more difficult, and more subjective, question, to which there can be no definitive answer. On the one hand, it is the case that an EU migrant can arrive here, start a job, and immediately begin to receive public money in the form of tax credits, having made absolutely no prior contribution, economic or otherwise, to the UK.  On the other, in principle the position is no different for a British citizen – there are no contribution conditions for tax credits, and indeed nothing to require you to have been a productive or even law-abiding citizen in the past. Indeed, from a purely economic or fiscal point of view, the main difference between a UK and an EU citizen starting their first job in this country is that UK taxpayers have paid to educate the first but not the second.

Similar considerations, it should be noted, apply to another issue, the fact that EU citizens working here can claim child benefit for their children even if the children are living abroad. On the one hand, child benefit was certainly never intended to pay for children being brought up in other countries, where costs may be lower. On the other hand, the parent(s) are working and paying tax here (by no means true of all UK parents) and the children are certainly overall less of a cost to UK taxpayers than if they were actually living here!

So what does the Prime Minister want to do about it?

But we also need to do more now to reduce migration from current member states, and that means reducing the incentives for lower paid, lower skilled EU workers to come here in the first place.. These tax credits and other welfare payments are a big financial incentive, and we know that over 400,000 EU migrants take advantage of them. This has got to change.  I will insist that, in the future, those who want to claim tax credits and child benefit must live here and contribute to our country for a minimum of 4 years.

Are the PM’s demands realistic?

We don’t know yet – particularly since neither in his letter to President Tusk nor in his speech did he give us any more detail. Many say that they are incompatible with basic EU principles of non-discrimination, and highly unlikely to be acceptable to the countries in Eastern and Central Europe from which many migrants come. On the other hand, if a political decision is taken, the EU can be very flexible.  What is certain that resolving this issue will require a huge amount of diplomatic and political time and effort.

So is it worth it? Is the Prime Minister right? Are benefits a “pull factor”?  Do they increase immigration?

The wider economic literature suggests that welfare systems don’t generally drive immigration flows. Looking specifically at Eastern European migration to the UK, almost nobody comes here just to claim benefits; the main factors are employment (or the lack of it) and wages (both in the source countries and the UK). Perhaps the most telling point here is that when the European Commission asked the UK government to provide some evidence to substantiate its claims on this issue, the response (according to the Telegraph) was:

But the Prime Minister said that the statistics showed it would make a big difference:

To those who say that this won’t make a difference. I say look at the figures. We now know that, at any one time, around 40 percent of all recent European Economic Area migrants are supported by the UK benefits system…

Previous by a number of different researchers has suggested that only a relatively small proportion of EU migrants claiming benefits would be affected by his proposal, because most have been here longer than 4 years – and, for obvious reasons, migrant are more likely to claim the longer they have been here (in particular, they are more likely to be in families with children).   The chart below, courtesy of Michael O’Connor) suggests that most EU migrants claiming tax credits have been here for longer than four years – often considerably longer.  In other words, only a relatively small proportion of EU migrants would be affected – and most of these would probably come to the UK in any event. 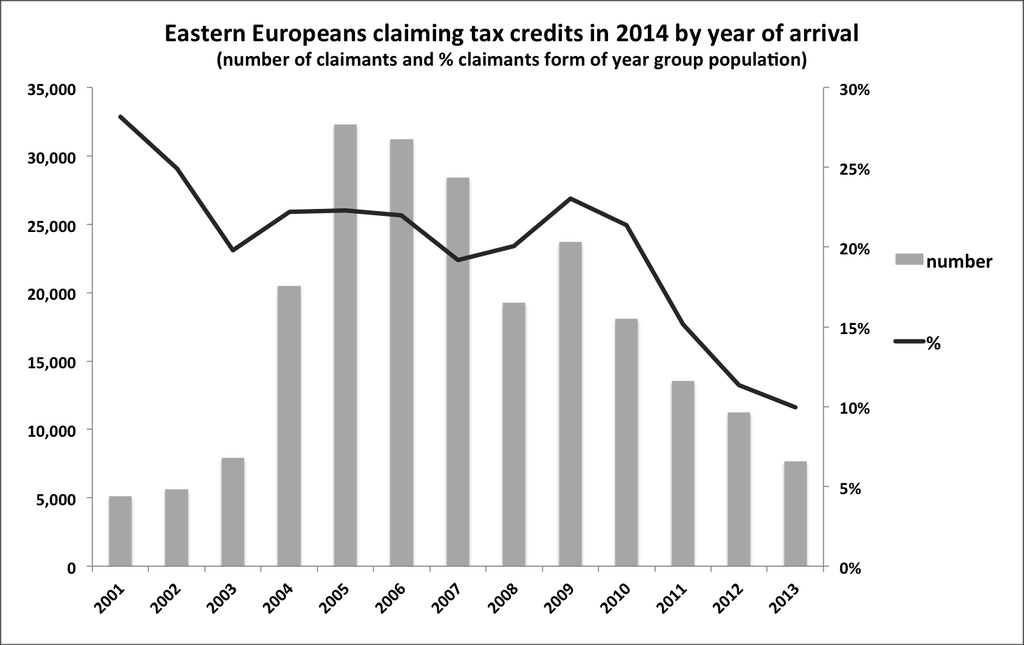 However, the Prime Minister’s numbers are rather different.  They have not yet been published, which is highly irregular, and almost certainly a violation of the official Code of Practice on official government statistics – FullFact have already made an official complaint. At first sight, they look very odd indeed to those of us who work in this area, for several reasons:

Finally, I was amused to note that the “methodological note” that the Prime Minister’s Office circulated to journalists to explain the statistics referred to the “Annual Passenger Survey.”  While the Civil Aviation Authority publish something that is sometimes referred to this way, that’s not what they mean at all; almost certainly the note intended to refer to the International Passenger Survey, which is published quarterly. Not substantively important, but it hardly gives one much confidence…

So for the moment, we have no real way to assess the validity of the Prime Minister’s statistics, except to note these issues.  One number mentioned by the government, which does seem reasonably consistent with what we know, is spending of about £500 million on in-work benefits for recene EU migrants. This would be less than 0.5% of (non-pension) benefit spend, compared to their 1% share of the non-pensioner population.

It will be very interesting to see the details of the government’s statistics; and, in due course, of the government’s proposals, which still remain very sketchy, But, for the moment, we can say that there are indeed lots of EU migrants claiming tax credits (but not other welfare benefits), although it still seems unlikely that recent arrivals are anything like the lion’s share; this isn’t much of an economic problem from an economic perspective, although it does raise issues of “fairness”; that the government’s proposals will be difficult (although perhaps not impossible) to negotiate; and that the impact on immigration flows would be fairly small.

This piece by senior fellow of The UK in a Changing Europe Jonathan Portes originally appeared on the National Institute of Social and Economic Research.