What will we learn about migration from the Census? 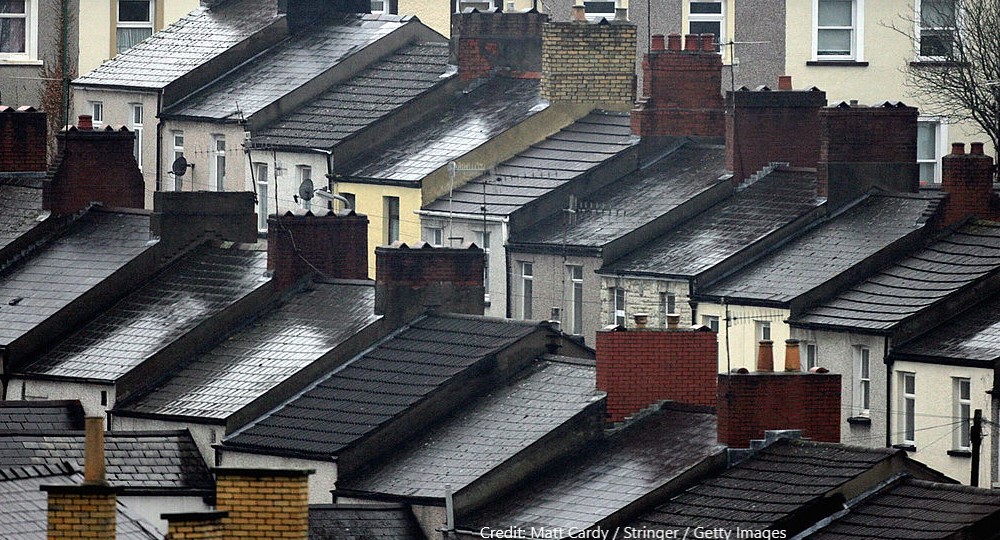 In 2012, the results of the 2011 Census required migration analysts to rewrite the history of the previous decade of migration to the UK. The population estimate for England and Wales was revised up by just under half a million, as it emerged that official estimates during the 2010s had understated net migration of people from the eight Central and Eastern European (‘EU-8’) member states by more than half, and net migration from other EU member states by a third.

This summer, a decade later, we will receive early results from the 2021 Censuses in England, Wales and Northern Ireland (Scotland conducted its Census in 2022 so its results will be delayed). Will we be in a similar position this time around?

Why is the Census so important?

The Census provides the most accurate available snapshot of the UK population. Between Census years, we have other sources of information about the population, but they are either extrapolated from surveys (to which not everyone responds), or taken from administrative data such as tax records (which don’t cover everyone). By contrast, the Census has a very high response rate. Of course, the Census doesn’t catch absolutely everyone, but in England and Wales, 97% of households responded to the 2021 Census. That’s pretty good. And it gives us a very useful benchmark to assess other migration data against.

The 2021 Census was a bit unusual. It was conducted in the middle of the pandemic, as the UK was starting to emerge from the third national lockdown, and not everyone was living where they normally would. If substantial numbers of migrants left the UK during lockdown and returned shortly thereafter, they may not be included (although some of them might be if they had household members here).

Nonetheless, having source of data like the Census now is particularly useful, because of the chaos the pandemic wrought with migration statistics. Immigration and emigration are no longer collected in the same way as they were pre-pandemic, and data on the resident population have become less reliable. The Office for National Statistics (ONS) is in the middle of a programme to produce statistics from new sources such as tax records, but the figures coming out of this process are still experimental. All this makes the Census really crucial right now.

What will the Census tell us?

The first England, Wales and Northern Ireland Census data won’t be published until the summer. But unusually, the ONS offered a preview of England and Wales figures by publishing counts of responders for selected countries of birth in response to the Ukraine crisis. These are not the final Census estimates, as they haven’t yet been adjusted to account for people who didn’t respond. The actual figures should thus be slightly higher, but not dramatically so. Nonetheless, some provisional conclusions are possible.

First, the early-release Census data seem to confirm suspicions that the 2021, pandemic-era population estimates are not reliable for looking at individual countries of birth, as ONS has itself indicated. Figure 1 compares the Census counts (not yet adjusted for non-response) to the official population estimates by country of birth in 2019 and the year ending June 2021, which are taken from the Annual Population Survey (APS). All the figures are for England and Wales only. 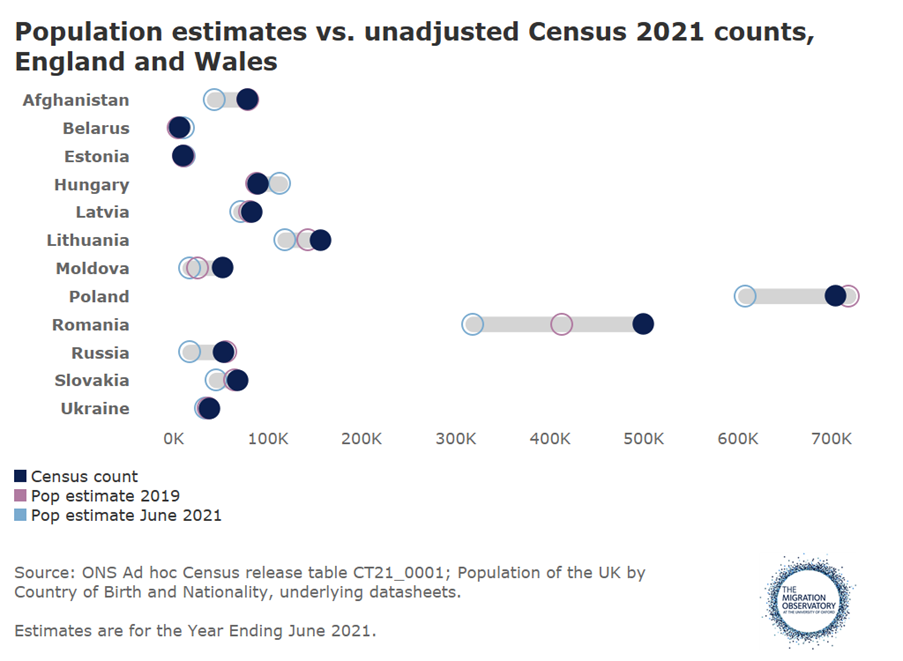 There is a lot of uncertainty about what happened between the 2019 population estimate and the 2021 Census – that is, during the pandemic. But with ONS now suggesting—again, based on very provisional data—that net emigration of EU citizens was smaller than originally thought in 2020, it’s possible the 2019 population estimates weren’t too far off the mark in many cases.

When we get the final Census data for all countries or origin, we can assess more robustly how accurate official population estimates have been—both for individual countries and for the migrant population as a whole. It would be surprising if the Census didn’t reveal at least some undercount of the migrant population, since migrants are often more difficult to survey, but the scale of this is difficult to predict. So the information we get from this comparison could play an important role in improving and adjusting the statistics we collect over the next decade. Census data will also help ONS assess their newly developing administrative data-based migration statistics, by giving a better sense of who is covered and who is not.

In other words, the Census figures have their drawbacks, not least that they provide a single snapshot of the population at a time when people weren’t going about life as normal; and that Scotland’s Census was delayed. But the Census is still the best statistical show in town and will be absolutely essential to understanding not only the migration that took place up until March 2021, but also how we measure migration in the decade to come.

By Madeleine Sumption, Director of the Migration Observatory at the University of Oxford. A second blog (live on 20 April 2022) analyses the EU Settlement Scheme statistics.

From the author: Thanks to Alan Manning and Chris Stickney for comments on an earlier draft of this blog. Any errors are the responsibility of the author alone.