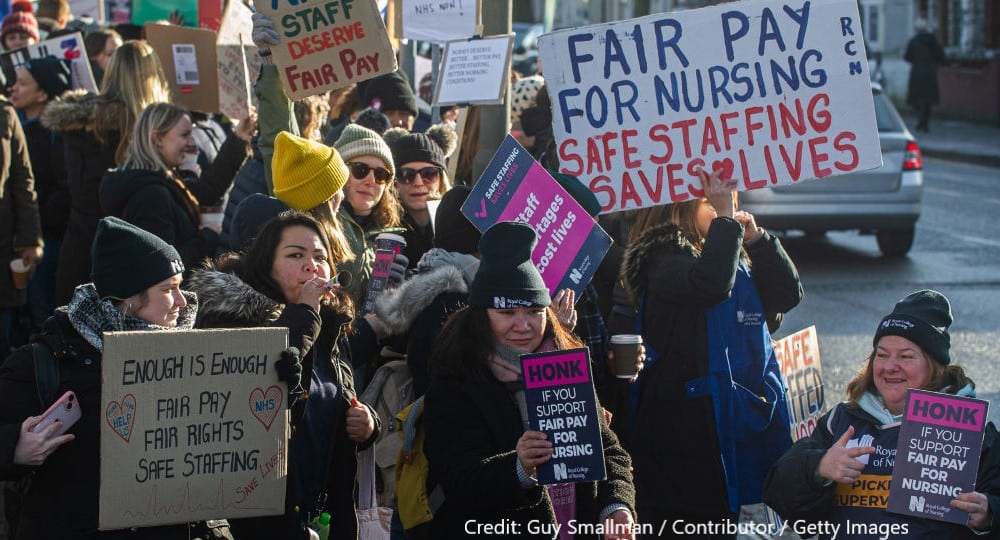 Tonia Novitz examines the Strikes (Minimum Service Levels) Bill – which would give ministers the power to set minimum service levels during industrial action – highlighting the ways in which the legislation differs from minimum service requirements in many other European countries.

Rishi Sunak’s government seems determined to stop strikes, not through negotiation, but by changing the law. The Strikes (Minimum Service Levels) Bill 2023 has now replaced a 2022 Bill limited to ‘transport strikes’, reflecting a shift in ambition. The aim is to enable the Secretary of State for Business, Energy and Industrial Strategy (BEIS), currently Grant Shapps, to set minimum service levels to deter strikes in certain sectors.

While new legislation might seem to offer an opportunity for Sunak and Shapps to ‘take back control’, the UK’s relationship with Europe continues to pose problems. They have claimed that the United Nations agency, the International Labour Organization (ILO), supports such measures and that they are applied in France, Italy and Spain. The government’s ‘Memorandum on European Convention on Human Rights (ECHR)’ asserts that the Bill is compatible with Convention rights. But closer examination shows that neither of these claims hold water.  Instead, the UK is in danger of breaching obligations under the EU-UK Trade and Cooperation Agreement (TCA).

In contrast with many other European constitutions, there is no positive right to strike in the UK. The Trade Union and Labour Relations (Consolidation) Act 1992 (TULRCA) provides limited immunities for trade unions from civil liability and minimal protections from dismissal for strikers. Restrictions are placed on the lawful aims of industrial action and how such action may be called, requiring compliance with detailed balloting and notice procedures. The Trade Union Act 2016 imposed a turnout threshold of 50% in any ballot and required that 40% vote in favour of action in so-called ‘important public services’.

Those services were listed in the 2016 Act as ‘(a) health services; (b) education of those aged under 17; (c) fire services; (d) transport services; (e) decommissioning of nuclear installations and management of radioactive waste and spent fuel; and (f) border security’ and were the basis for Regulations adopted in 2017. In 2023, the list of sectors to be covered by minimum service levels is very similar, although ‘education services’ are no longer age limited and ‘rescue’ services are added.

The failure to limit these sectors to ‘essential services’ recognised in the ILO amounts to a significant breach of Article 11 of the ECHR. This follows from the judgment of the European Court of Human Rights (ECtHR) in Ognevenko. This case is cited by the government in its Memorandum on ECHR to suggest that minimum service levels are welcomed by the ILO and in the Council of Europe.

In fact, this case was a challenge to Russian treatment of rail transport as an essential service. The ECtHR made clear that this should only be possible: (1) for public servants exercising authority in the name of the state; (2) for services the interruption of which would endanger the life, personal safety or health of the whole or part of the population; and (3) in the event of an acute national emergency. That view is in line with the principles established on freedom of association by ILO supervisory bodies which scrutinise implementation of labour standards set by that Organization.

If the Russian government wished to prevent strikes in the rail transport sector, it was necessary to give reasons explaining how these criteria were met. Minimum service levels were considered appropriate by the ECtHR as an alternative to a ban on strikes in a given sector, but only if those three ILO criteria were satisfied. Notably, France does enable minimum service levels but not in public transport.

Requirements of negotiation and arbitration

Where a service is covered by those Regulations, the employer can give a ‘work notice’ to a trade union seven days before a strike listing names of ‘persons required to work during the strike’. Before issuing the work notice, the employer must consult with the union about the number of persons and the work to be specified in the notice, which can be varied up to four days before the strike or later if agreed with the union. The employer must have ‘regard to any views expressed by the union’, but this is consultation and not negotiation.

This is a significant departure from the practice of various European states, such as Italy and Germany where minimum service levels are negotiated in collective agreements. It is also a system which ultimately places no constraints on the government’s discretion to set minimum levels at such a high standard that strike action cannot in fact be taken.

In Spain there is scope for public hearings on minimum service rules with the prospect of legal challenge in the courts. Unlike other EU states, this legislation would bring the UK into conflict with ILO and Council of Europe standards.

The work notice and forced labour

Finally, the notice setting out the names of ‘persons required to work during the strike’ may breach Article 4 of the ECHR concerning forced or compulsory labour. The trade union can be held liable if it does not take ‘reasonable steps’ to ‘ensure’ those named work and the named persons are not covered by automatic dismissal protections in TULRCA when they refuse to work. Article 4 would permit ‘service exacted in case of an emergency or calamity threatening the life or well-being of the community’, in other words an essential services scenario. However, the 2023 Bill is not limited to those circumstances.

Breach of the TCA

On the same day that the 2023 Bill was presented to Parliament, Keith Ewing giving evidence in the BEIS Committee observed that its content would breach the ‘level playing field’ provisions of TCA, which require the UK to honour its obligations in the Council of Europe and the ILO.

The TCA does not require compliance with EU law, which in any case does not regulate industrial action. However, the TCA does require respect for freedom of association and prevention of forced labour. The EU has demonstrated that it is willing to be assertive in the enforcement of such clauses. There seems to be both industrial and diplomatic conflict ahead, as the Sunak government confronts not only strikers but European and international obligations.

Far from bringing the UK into line with the standards and practices of other European states and the international community, the proposed minimum service legislation constitutes a further departure from established norms and treaty obligations. As such, this action seems likely to promote discord rather than settle disputes at home and abroad.

By Tonia Novitz, Professor of Labour Law, University of Bristol.