Months away from leaving, the data shows Britain remains divided as ever on what Brexit will mean for the country

Britain is only weeks away from leaving the European Union. There is limited support for the Prime Minister’s negotiated Brexit deal, and the consequences of a no-deal Brexit are increasingly apparent.

It may come as a surprise, therefore, that the public isn’t having second thoughts about Brexit. A majority of the public thinks it was wrong to vote to leave the EU, but this is a very slim majority. Very few Leave voters have changed their minds about Brexit.

One reason for this stability is that the EU referendum has triggered strong identities along Brexit lines. Figure 1 below shows the proportions of people who either feel close to one side or the other (British Election Study data) or identify as a ‘Leaver’ or a ‘Remainer’ (using our survey-tracker data, collected by YouGov). Most people now have one of these identities and the proportion in each camp has changed little since the referendum.

Figure 1: Proportion of people who identify as Leavers or Remainers 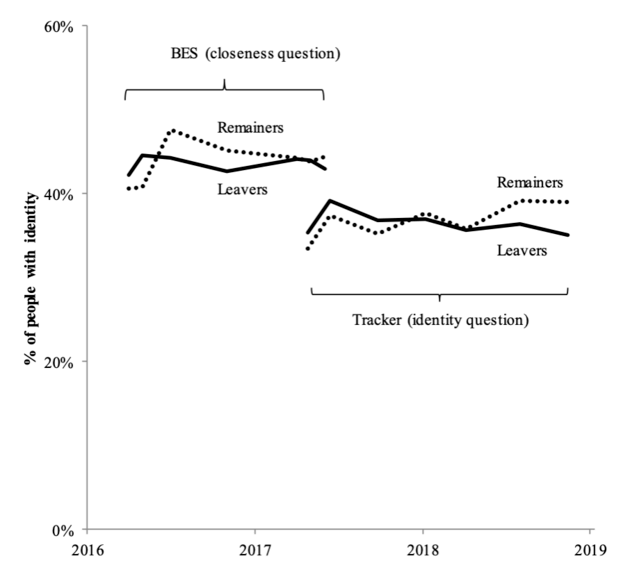 These new identities shape how people view the consequences of Brexit. We know that political identities such as party identification affect how people select and interpret new information.

A similar process of motivated reasoning applies to people with Brexit identities. For example, as Rob Ford and Alan Wager set out in the UK in a Changing Europe’s new report on Brexit and public opinion, this can have an impact on how voters view the implications of no deal.

Leavers voted for Brexit in part because they were optimistic about Britain’s future outside the EU and were not persuaded by ‘Project Fear’.

To demonstrate this gap in perceptions, we asked respondents in a series of representative surveys conducted by YouGov whether they “think leaving the European Union will have a positive or negative effect on Britain?”

The figure shows that people who identify as Leavers consistently think that Brexit will have a positive effect on Britain. This has not changed significantly over the last 18 months, even as assessments of the negotiations with the EU have become progressively more negative among both Leavers and Remainers. On the other side, Remainers have remained staunchly pessimistic about the outlook for Britain post-Brexit.

Figure 2: Views of Remainers and Leavers on the consequences of Brexit for Britain 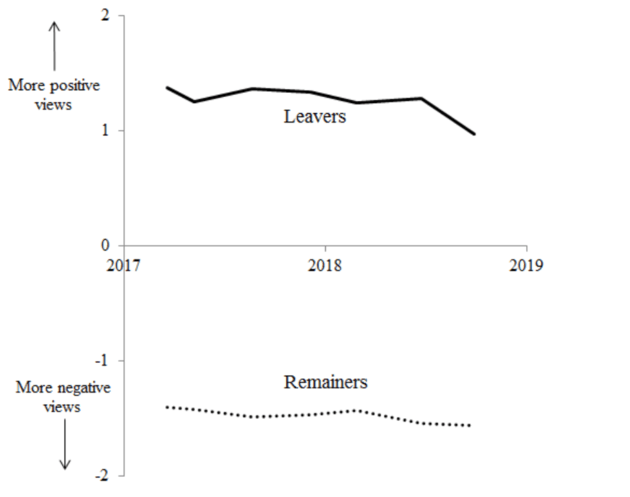 We also asked people what they thought the effect would be for them personally. Again, we see a clear gap in perceptions. While the differences are smaller, there is still an obvious divide between the optimism of Leavers and the pessimism of Remainers. And again, this divide has remained extremely stable throughout the negotiation period.

Figure 3: Views of Remainers and Leavers on the consequences of Brexit for them personally 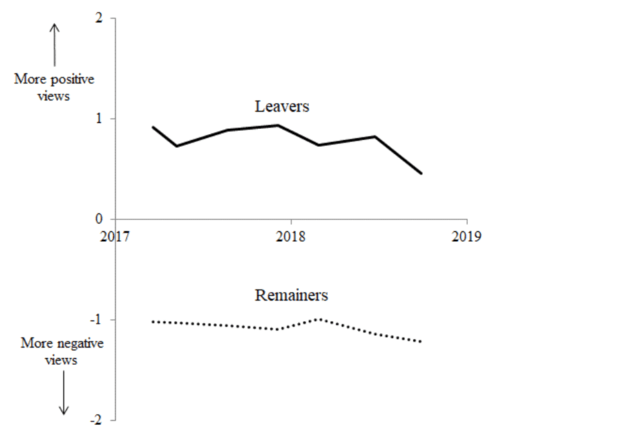 Finally, we see the same patterns when we ask people to tell us in their own words what they think will be the implications of Brexit. In July 2018, 87% of Remainers mentioned some kind of negative consequence compared to only 18% of Leavers. Conversely, 61% of Leavers mentioned some kind of positive consequence compared to only 3% of Remainers.

These numbers are essentially the same as in April 2017 when we first started asking these questions. Leavers remain upbeat about the prospects of new trade deals, greater sovereignty and more control over immigration. On the other hand, Remainers tend to talk about negative economic consequences.

In short, the prolonged Brexit negotiations that were meant to bring greater clarity to the future have done little to bring people together. Today, Britain remains as divided as ever on the question of what Brexit will mean for the country.