Moving determinedly towards the door: the UK’s Article 50 notification letter 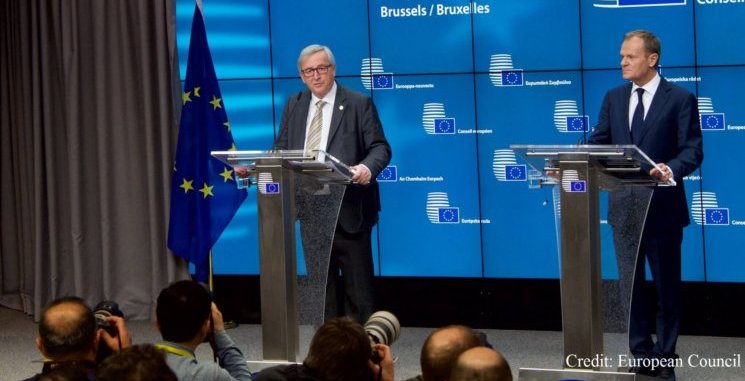 Today’s an important one in the Brexit saga. With the submission of formal notification to begin Article 50 negotiations, the UK has crossed an important threshold that cannot be easily crossed, whatever the legalities.

It also matters because it represents the final opportunity for the UK to shape the agenda of that process. This cannot be underestimated, even if it’s been largely ignored in the UK debate: Article 50 is about the EU decided what to offer a departing member state, not about that state choosing what to keep or bin.

Oddly, both the Lancaster House speech and the subsequent White Paper offered little of substance, something that was perhaps shaped by a desire to keep the powder dry until the last moment, so that there wasn’t an immediate out-manoeuvring by the EU27. However, the suspicion that the government simply didn’t have a plan in the first place has been hard to shake off.

The notification letter is thus vitally important in putting down a marker.

How does it do?

To the government’s credit, this is a concise and focused letter. With rumours of a 100-page version floating around, the danger always was that one might throw in everything into the mix, to lay down markers and set up red lines. However, that is also a recipe for stasis and endless unintended consequences.

Instead, the approach has been one that fits with good negotiating practice, namely to focus on principles rather than specifics. The seven principles set out are directed at creating a positive framework, within which the parties can find mutually-acceptable outcomes. Put differently, if you focus on underlying interests then you’ll see that there are different ways of skinning the proverbial cat. That’s true for any negotiation, but especially one as complex as this.

At the same time, it’s worth noting that of the seven, there is only one focused squarely on substance, rather than process. And all of them point strongly towards the desirability of reaching an agreement: there is an echo of ‘no deal is better than a bad deal’, but only an echo. Indeed, the tone is conciliatory rather than bombastic, again reflecting the looming dynamic of the discussions.

This does still leave the question of what the UK wants: there has been a lot about what it doesn’t want, but not much of the flipside.

Here, the letter does not give much direction. It talks of a ‘deep and special relationship’ and ‘a bold and ambitious Free Trade Agreement’ that is comprehensive in scope, but this is not fleshed out into areas of activity. Even free of movement – such a central part of May’s rhetoric to date – is notable more by its absence than anything: the UK doesn’t want to be part of the single market, but that’s as far as it goes. The avoidance of CJEU control is completely dropped, much to the relief of all involved, one imagines, given that the court will have to have powers any final agreement.

Indeed, it is only the Northern Irish issue that makes it into the text; a plea to recognise the particular relationship with the Republic, couched in language of maintaining the peace process. No solutions to this most intractable of problems is offered.

And this is perhaps the most lasting of impressions. This is a letter from a government that still hasn’t articulated a strong and clear sense of what it seeks: yes, there are fine words about the need to ‘advance and protect our shared European values’ – language that might stick in the throats of some eurosceptics – but this doesn’t point to a way forward in determining what should be the tools for building a new relationship post-exit.

As far as it, it’s about as much as could be expected. Whether that is enough to set the two years of negotiation off with a fair wind remains very much to be seen.