Constituents and Brexit: did MPs get punished for their votes? 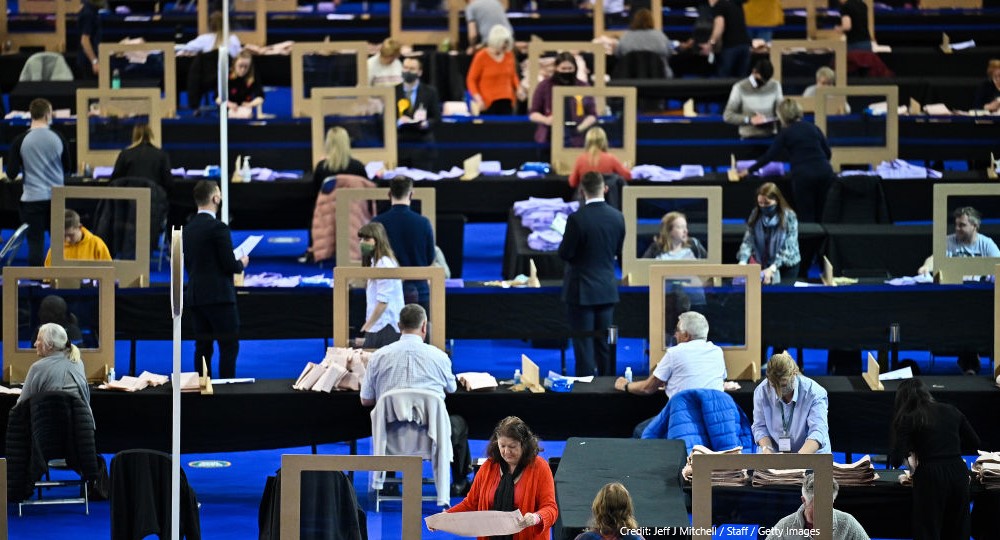 The 2017 general election was held just under a year after the UK voted by a slim margin to leave the EU. While 52% voted Leave, this ran against the position of MPs back in 2016: 75% of all MPs, 56% of Conservative and 95% of Labour MPs, campaigned for Remain. But to what extent did constituents punish incumbent MPs out of step with their own vote in the referendum, when given the chance a year later? In other words, did voters at the 2017 general election hold incumbents accountable for their Brexit stances?

And further, to what extent are British MPs aware of the limits of issue accountability? Do they have a good handle on how much (if at all) being out of step with their constituents will cost them at election time?

The high salience of Brexit provides a perfect opportunity to test for issue-based accountability in British politics. This is actually quite rare; a strong party system enforces intra-party discipline, with MPs seldom given the freedom to campaign according to their own preferences on political issues.

Previous evidence on issue-based accountability is mixed. Vivyan and Wagner suggested some limited accountability for Labour incumbents on their positions on the Iraq War. Pattie, Fieldhouse, and Johnston found some evidence that MPs who supported ‘popular’ policy decisions were rewarded with an extra 0.5-0.9 percentage points in subsequent elections. Butler and Kavanagh, though, found no evidence that positions on the Euro had any electoral effect.

Figure 1 shows how vote share change for Conservative and Labour incumbents was related to the estimated constituency Leave share, separated by the incumbent’s Brexit referendum position. MP positions were collected before the referendum as part of the BBC elections analysis. 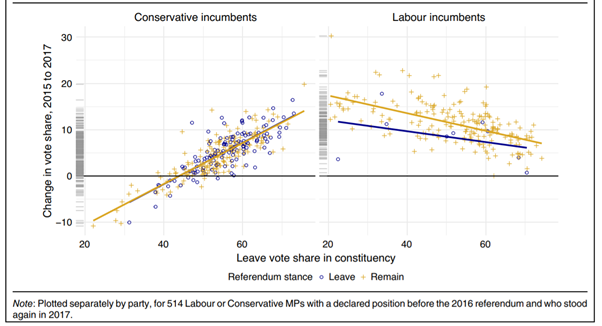 Figure 1. Change in incumbent vote shares as a function of Leave vote share in each constituency

Moving away from the aggregate analysis, evidence from the British Election Study Internet Panel (BESIP) suggests there is a small degree of congruence on voter likelihood to back incumbents.

That is to say, if an incumbent’s position were to change to be in line with that of a voter, they would be around 2% more likely to vote for them.

These are however measurements of ‘unconditional congruence’, without consideration for the effect introduced by challenger candidates.

That is to say, we expected that the effects of congruence would be effected if the incumbent’s nearest challenger a) took a different referendum stance to them, and b) this stance was more congruent with the constituency. Remain voters, for example, may be more likely to vote against a Leave-supporting MP if there is a relevant challenger who supports Remain, but not if the nearest challenger also supports Leave.

Figure 3 shows this conditional issue accountability. As we can see, when an incumbent is faced by a challenger with a contrasting referendum position, the combined effect is around four percent. When the contrast is absent, the effect of congruence is close to zero.

So, are these effect sizes relatively large or small? The effect sizes are small relative to those found in the US House on important issues: Nyhan et al. studied the effects of voting against the (then generally unpopular) Affordable Care Act, and found estimates 13 times larger.

On the other hand, the effects are comparable to those of roll-call congruence in US state legislatures. The aggregate consequences are substantially smaller than the estimated effect of being implicated in the 2007 parliamentary expenses scandal.

We can work out the implications of congruence for the 2017 election. Thirty-seven of the 524 incumbent MPs considered here lost their seat in the election. Of these, 16 were also out of step with their constituency. Seven of these 16 MPs, because they faced a challenger who had a contrasting position, could reliably have improved their vote share by switching.

Overall, the evidence suggests a small, limited, but nonetheless quantifiable effect of issue congruence on likelihood to vote for incumbents, which in turn has a small effect on aggregate vote shares.

Finally, we fielded a survey to MPs in order to ascertain the extent to which MPs believed they were (or are) accountable for their issue stances. An example of one of six vignettes we put to MPs can be seen in Box 1 below, in which they were asked to estimate the percentage of the vote one of their colleagues would have received had they switched their referendum position (in this case, Rob Wilson in Reading East). A total of 111 MPs participated in the survey. 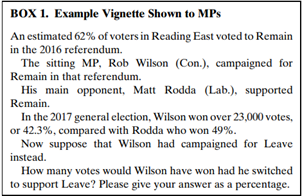 The results of this were consistent with, but slightly larger than, the aggregate implications. Our survey found that MPs did expect that there is some cost associated with being ‘out of step’ with constituents on Brexit, but not to any large degree. Our conclusion from this is that MPs do, on average, believe that their accountability for issue stances is minimal when it comes to swaying constituents.

So, MPs seem to be minimally accountable for their issue stances – and they know it.

What does all of this mean for British politics, and for political behaviour and representation at large? We do not find clear evidence that voters are holding MPs accountable on the most salient and divisive issues in recent memory – suggesting that, overall, average levels of issue accountability for British politicians are very low.

This suggests that our system does not generate the kind of accountability and connection between representatives and the issue preferences of their constituents that supporters of first past the post often claim.

By Patrick English, Research Manager in the Political and Social Research team at YouGov, Chris Hanretty, Professor of Politics at Royal Holloway, University of London, and Jon Mellon, senior lecturer at the University of Manchester. This research is derived from the APSR paper: Hanretty, Mellon, and English (2021) Members of Parliament are Minimally Accountable for Their Issue Stances, (and They Know It), American Political Science Review.