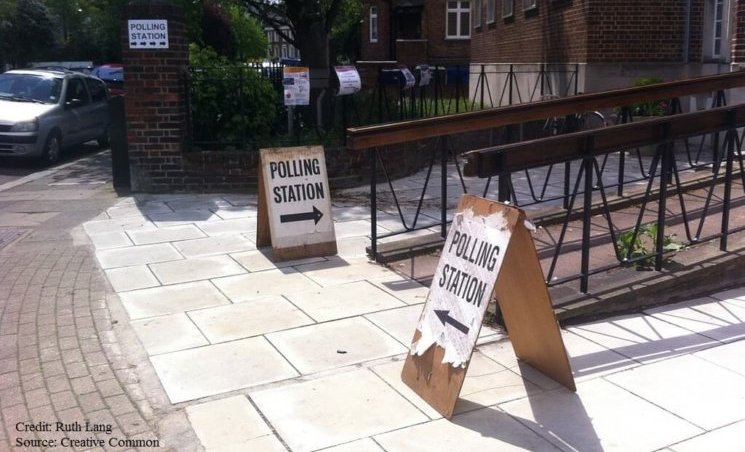 At one time, Scottish politics, like those elsewhere in Great Britain, divided rather clearly on the left-right axis, with elections disputed between Labour and the Conservatives. In the mid-twentieth century, they divided the vote fairly evenly between them. Since the 1970s, another axis has become significant, the unionist-nationalist divide.

Now there is an additional one, on Europe, between Remain and Leave supporters. The old party system has broken down, creating instability and marked shifts in support from one election to the next.

This is not necessarily because Scottish public opinion has become more sharply divided. The surveys we conducted in the Centre on Constitutional Change before and after the Scottish independence referendum showed that public opinion still clustered in the middle, favouring ‘devolution-max’ or ‘independence lite’.

Surveys have also shown Scots as mildly Eurosceptic but not in favour of leaving the EU, as was confirmed in the Brexit referendum. They also show that attitudes to the EU are not at all correlated to those on independence. The SNP policy, for independence in Europe, makes a logical connection, with Europe as an external support system for an independent Scotland, but this finds little echo in public opinion.

The parties have had to map onto this complex political landscape. From the 1970s, the decline of the Scottish Conservatives emptied the centre-right part of the political spectrum whether in the unionist or nationalist quarter. The centre-left box was correspondingly crowded, but divided between unionist and nationalist options. With all the parties more or less in favour of EU membership, the Eurosceptic box was also underpopulated.

Referendums, however, have the effect of polarizing political options. So things started to change dramatically with the 2014 independence referendum. The unionist-nationalist cleavage became the main line of division, as supporters of independence lined up with the SNP. Working class Labour voters moved to the nationalists, leaving the left-unionist box underpopulated.

The Conservatives then started to revive by positioning themselves as the main unionist option, while sticking to the ideological centre on the left-right dimension and being largely pro-Europe, making a subtle but noticeable contrast with their counterparts south of the border. Middle class unionist Labour voters now started to move to the Conservatives.

The result of the EU referendum in Scotland appeared very clear, with 62 per cent voting to remain but in practice it has put all the parties in a difficult position. At UK level, both Conservatives and Labour have accepted Brexit, putting themselves at odds with majority Scottish opinion. The SNP remain pro-Europe but are conscious that about a third of their voters supported Brexit.

The local elections were a test of these positions and their viability, in a dry run for the June General Election. The Conservative Party chose to make these elections about the prospect of another independence referendum. Indeed they talked about almost nothing else, while accusing the SNP of obsessing about independence.

For the SNP, the issue was resisting the London Conservative Government. Turnout, at 47 per cent, was seven per cent up on the last local elections in 2012.  Scottish local elections are held under the Single Transferable Vote (STV) system of proportional representation, so the figures cited here are for first preference votes only.

The SNP held on to its vote share from the 2012 local elections, about a third of the vote. Yet this is well down from its share in the 2015 UK General Election when they scored 50 per cent and the 2016 Scottish Parliament elections where they scored 47 per cent of the constituency vote and 42 per cent on the party list.

Labour continues to decline, squeezed between Conservative unionism and SNP nationalism. Its vote fell to 20 per cent, from 31 per cent in 2012 and also from the 2016 Scottish Parliament elections (23 per cent in the constituencies and 19 per cent on the lists).

The Conservatives achieved their best result since the 1980s, consolidating their position as the second party of Scotland with 25 per cent, about double their 2012 score and a slight improvement on their share in the 2016 Scottish Parliament elections (22 per cent in the constituencies, 23 per cent on the list).

It is not possible simply to extrapolate from this to the June General Election. Turnout will be higher, there will be fewer significant independent candidates, and Scottish electors have shown an ability to vote differently at different levels of government. The first-past-the post system used for Westminster elections encourages tactical voting.

Taken together with the results of the 2016 Scottish elections, however, it bodes well for the Conservatives in the short term. They made significant progress in areas where they can realistically expect to pick up Westminster seats, such as the Borders, the North East and Perthshire. In the longer term, however, they are a similar bind as the other parties.

Their new supporters among the formerly Labour unionist middle class will mostly be Remainers. A Scottish Conservative Party tied to a UK Government supporting a hard Brexit, austerity and welfare retrenchment may soon lose its appeal to them.

Multidimensional competition is a new game in British politics and it makes the results of elections ever more unpredictable.

By Michael Keating, Professor of Politics at the University of Aberdeen, Director of the Centre on Constitutional Change, and Senior Fellow in the UK in a Changing Europe programme.