NATO has many problems – is Brexit one of them? 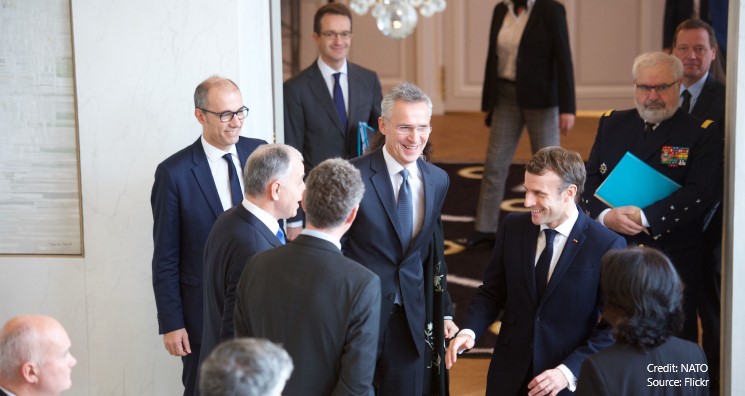 When NATO leaders meet at the December summit in London they will be presiding over an alliance in crisis. As French President Emmanuel Macron bluntly pointed out a few weeks ago, the alliance suffers from ‘brain death’ .

It also suffers from the perceived consequences of the diminished credibility of the Article V mutual-defence clause, concerns about burden-sharing and some countries not pulling their weight, and fears of American disengagement and disinterest which have heightened since the election of Donald Trump.

With the summit being held in London, and with a British general election (and supposedly Brexit) just around the corner, it is worth asking whether Brexit also presents a challenge for the alliance.

In theory NATO is ring-fenced from the impact of Brexit.

It is a distinct organisation, the UK is an ardent supporter, and it imposes none of the sovereignty costs that the EU does and which so irked British citizens.

Some have even suggested that Brexit might lead to a strengthening of the alliance, since the UK will place greater importance on its NATO membership after withdrawal, and the alliance will become the key forum for engaging EU member states seeking to include the UK in security initiatives.

The reality, as ever, is slightly more complex, because the Brexit vote has unleashed forces on both sides of the channel which push in different ways.

To begin with, the UK itself is hedging its bets.

It has made it clear it intends to continue in its role as an unimpeachable NATO member, but it is also keen not to be excluded from EU initiatives – not least because it is aware of some of the troubles facing the alliance itself.

Theresa May was very clear on staying as involved as possible; but while many of the member states supported this aim – especially in Eastern Europe – the collective EU response was less than forthcoming, since, it was claimed, British participation would undermine the Union’s decision-making autonomy.

Moreover, the politics of Brexit are messy, and are likely to get messier as time goes on.

Relations between the UK and the EU27 soured rather rapidly as the first – and, many assumed, least contentious – round of negotiations got underway.

Discord between allies is never helpful, even if the terms of political disagreement concern another institution.

And the problem is not limited to intra-European squabbles, since Trump’s rhetorical support for Brexit – amongst other things – has also contributed to greater discord in the transatlantic relationship.

Meanwhile, the UK is no longer poised to act as a transatlantic bridge between the US and the EU, risking further divergence in years ahead.

The spectre of impending British withdrawal has also led to the recent push on the EU side to achieve ‘strategic autonomy’, leading to a host of recent initiatives, including the European Defence Fund (EDF), Permanent Structured Cooperation (PESCO), and a joint headquarters for EU military missions.

While the rhetoric is impressive, it remains to be seen whether these initiatives will lead to real movement towards meaningful autonomy.

Some, such as PESCO, might actually contribute to Europeans’ ability to meet their NATO targets, since they are focused on capability-development, though over time they may well lead to greater divergence between the EU and NATO.

There are also questions of resources and effectiveness.

Brexit is predicted to lead to a shrinking of the UK economy, with the magnitude of decline determined by how ‘hard’ a Brexit is chosen.

While the UK will continue to meet its obligation to spend two per cent of GDP on defence, in real terms it is likely that defence spending will decline commensurate with the rest of the economy.

And Brexit may result in less efficient procurement, since greater separation between the UK and other EU and NATO members means fewer opportunities to take advantage of efficiency-savings from joint procurement.

It also invites duplication of resources.

And finally, there are changes in foreign policy, and public attitudes, to consider.

‘Global Britain’, the slogan adopted by May’s administration, seems to suggest the UK will be seeking greater engagement outside its traditional allies, and may divide the UK’s attention and loyalties between existing democratic partners and newly emerging powers.

Public attitudes are complex and difficult to discern: some Brexiteers are pro-Trump, others decidedly less so, and a significant number follow Nigel Farage in his more sympathetic stance on Putin.

There is also evidence that support for the UK’s security commitment to its European partners has diminished in the wake of the vote.

The picture that emerges is a highly complex one.

No doubt mutual interests will help the NATO allies navigate some of these institutional and political challenges. And some opportunities may lie (well-hidden) amongst post-Brexit developments.

But as it stands, Brexit would seem to add considerable extra confusion to an already difficult situation.

By Benjamin Martill, lecturer in Politics and International Relations at the University of Edinburgh.