Who can Stop the War?: the British left, NATO, and Russia 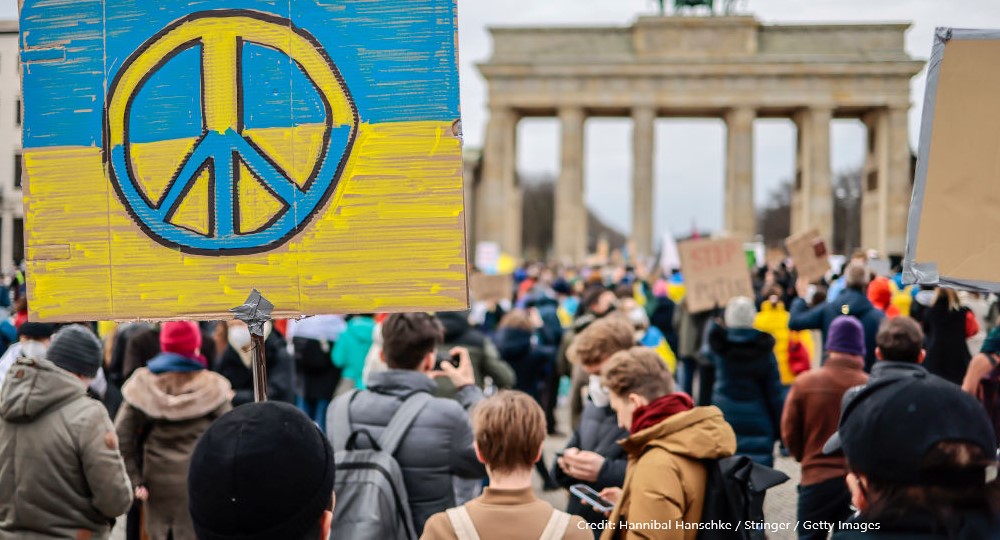 As Russian missiles fall on Ukraine, an organisation named ‘Stop the War’ has become a focal point of controversy in the febrile world of the British left. Stop the War are either ‘naïve’, wrote Labour leader Keir Starmer recently, or ‘they actively give succour to authoritarian leaders who directly threaten democracies.’ The organisation’s vice chair (and former adviser to Labour’s previous leader Jeremy Corbyn) Andrew Murray, fired back, accusing Starmer of supporting ‘warmongering’. Corbyn himself – still suspended from the party whip – is deputy president of Stop the War and promotes it through his own ‘Peace & Justice’ organisation.

On the surface, this was a policy dispute over the UK’s diplomatic and military response to the emerging Russian-Ukrainian crisis. In the build up to Russia’s invasion, the government took a tough rhetorical stance against Putin and imposed sanctions. Starmer, joining other critics here and abroad of Johnson’s government, demanded a much stronger response.

Stop the War, in contrast, accused the British government of pouring ‘oil on the fire’. As of last week, they wanted the UK to encourage diplomacy between Ukraine and Russia through the Minsk-2 agreements. They cited last-ditch French and German diplomatic efforts as examples to follow.

Also contentious was the role of the North Atlantic Treaty Organisation (NATO). Stop the War blamed the current crisis on NATO’s eastward expansion after the collapse of the Soviet Union. They called for NATO to rule out Ukrainian membership.

Yet, Stop the War’s argument has been blindsided by Putin’s aggression. All this week, Russia has ripped up the Minsk Protocol. Germany and France, hitherto Stop the War’s suggested models, have imposed meaty sanctions. Most importantly, NATO is not the root of Putin’s grievances. Rather, it is his imperialist view of Ukraine as part of a ‘greater Russian space’ and thus in Russia’s sphere of influence, whatever the views of its democratically elected government.

Despite that, Stop the War doubled down. On Tuesday night, they reiterated that this conflict is ‘not … the responsibility of Russian or Ukrainian governments alone’. The UK and NATO, they claim, also bear significant blame, due to the ‘expansion of NATO and US hegemony’.

This spat is thus a proxy for other more entrenched divides. In part, it’s a parochial battle of political positioning. Starmer is consciously distancing himself from Corbyn – who, multiple accounts agree, damaged his electoral chances through his inept response to Russia’s 2018 poisoning attack in Salisbury. Murray has one eye on Labour’s internal critics of Starmer.

The clash is also overlaid with contested histories of British foreign policy over the twentieth century.

It is important, for instance, that NATO was a Cold War creation, an alliance against the Soviet Union. Labour’s leadership has traditionally been staunchly anti-communist: as Starmer stressed, it was Clement Attlee’s 1945-51 government that helped found NATO (he passed over Attlee’s murkier Cold War entanglements, like the bloody Malayan ‘Emergency’).

Other post-war British socialists, however, chafed at Cold War binaries. Anti-nuclear and peace activists, some of whom are involved in Stop the War today, attacked NATO’s participation in the arms race, and American Cold War interventions in Vietnam and South and Central America.

Further on the British left, others were more openly sympathetic to the Soviet Union. Back in the 1980s, Stop the War’s Murray was part of the ‘Straight Left’ faction of the Communist Party of Great Britain and battled with the ‘Eurocommunists’ over how far it should should break from the Soviets. This helps explain his current sparring with the journalist and former Trotskyist Paul Mason, a prominent critic of ‘tankies’ (an allusion to Soviet tanks crushing dissent in Hungary (1956) and Prague (1968)). Arcane splits in the British 1980s far left still echo in contemporary socialist politics.

Also crucial is the fraught legacy of former Labour prime minister, Tony Blair (1997-2007). Indeed, Stop the War was founded in 2001 and peaked during the mass opposition to the disastrous 2003 invasion of Iraq. Stop the War’s supporters point out that NATO has itself invaded and bombed other countries, particularly Libya (2011), and they point to the failed intervention in Afghanistan (2001-2021).

Some in Stop the War, like the chair of the Campaign for Nuclear Disarmament Kate Hudson, also attack NATO’s intervention in Yugoslavia (1999), blaming the country’s collapse on the West. Those who mention NATO’s intervention in the Kosovan War are, however, more likely to be supporters of institutions like NATO and the UK’s ‘responsibility to protect’, such as Shadow Health Secretary Wes Streeting, as they highlight its role in stopping genocidal ethnic conflict.

These histories are, in turn, underpinned by clashes over the true meaning of an ‘ethical’ or ‘moral’ foreign policy – an ideal that, Charlotte Lydia Riley stresses, is crucial for Labour’s self-image. Does it involve economic sanctions (that have civilian victims) and the sending of weapons to a warzone, coordinated through an inherited Atlantic alliance that has its own murky history? Or does it consist simply of pleas for peace and nothing else, even as a sovereign, democratic government calls for support while threatened by an oppressive dictator?

In Labour, it’s an old question. Attlee became Labour leader in 1935 after his ally Ernest Bevin publicly savaged Attlee’s predecessor, George Lansbury, for ‘hawking his conscience’ by refusing to impose sanctions on the Italian fascist Mussolini after his invasion of Ethiopia. Putin’s own invasion makes it burningly relevant today. With Labour ahead in the polls, it is not inconceivable that it could shape British foreign policy.